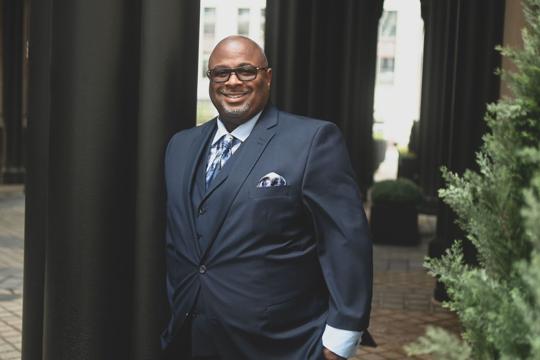 DEARBORN HEIGHTS — District 7 School Board of Education member Nathaniel Cann is responding to rumors about his past and his present.

Residents elected Cann to the school board in the general election last year and he made history by becoming the first Black man to be elected to the D7 School Board.

On Jan. 6, a fellow board member surprised Cann by nominating him as treasurer of the board, which he accepted.

A letter recently obtained by The Arab American News revealed that Cann was charged with embezzlement in 2001 and that his youngest child was recently pulled out of the D7 school district to transfer to another district.

In fact, I feel that I am a great example of someone who got himself in trouble with the law and made better of himself. I want people to know that just because you get convicted of a crime, your life is not over. — D7 School Board member Nathaniel Cann

Cann confirmed that, without exposing his personal family business, his youngest child was recently transferred out of the district and that the board president and board attorney did investigate and were able to confirm that Cann himself does still live in the district.

“Many minorities, when faced with the court system, don’t have the proper resources and counsel to stand up for themselves to fight the charges that are faced against them and are forced to take a plea,” Cann said. “I found myself faced with that, like many other Black men every day. Had I had the opportunity to have those resources, I would have been able to fully fight against the charges.”

He also said that making mistakes doesn’t make you a bad person.

“I was younger, and I did make mistakes, but that does not make me a bad person,” he said. “I have never let my mistakes stop me from being a regular member of society. In fact, I feel that I am a great example of someone who got himself in trouble with the law and made better of himself. I want people to know that just because you get convicted of a crime, your life is not over.”

Cann was an enrollment director and instructor in Southfield before going on to own multiple businesses in the community.

When he was nominated for treasurer, he said his past didn’t even cross his mind.

“I accepted and I wasn’t thinking, ‘oh, I have a felony,’” he said. “This role is a checks and balances role. I have no access to funds or accounts. The school district has done quite a few background checks on myself and everyone else who volunteers in the schools. I have never had a problem before and I have never hid myself from my background checks in the past.”

Since information of Cann’s past came out, he said that people have been driving by his home checking to see if he actually lives in the district, which he confirmed he does.

Cann also said that his children received a great education from the district, but he wanted to improve the diversity by becoming the first Black man elected to the Board of Education.

During his time as a resident and parent in the district, Cann has always been in attendance at school events, active with the Parent Teacher Organization and helped throughout the schools.

“There are a few community members who have targeted the only Black man on the board for any imperfections he has had,” he said. “I have many supporters that do understand that people make mistakes in their life, but once faced with an opportunity to correct them have done very well for themselves and their community. Like I said before, I think I’m a great example of someone who has gotten in trouble with the law and was able to continue to provide for their family. I had the confidence to even run for school board for our district and have done nothing wrong. I am very eligible to serve on this board.”