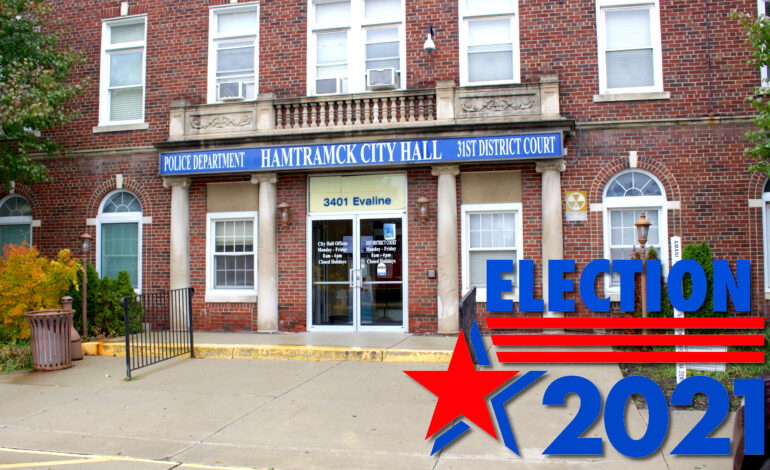 The Arab American News reached out to both, with questions geared towards their particular campaigns. The answers were received in writing and are presented here in the order received. Hamtramck Mayor Karen Majewski. – Photo by the city of Hamtramck

With 16 years in public service and recognition in Hamtramck, and four successful general elections, how are you feeling about your chances as we near Nov. 2?

Every election has presented its own challenges and I’ve never taken any victory for granted. So, as I’ve done since 2003 when I first ran successfully for City Council, I’ve been knocking on doors and talking one-on-one with residents all summer, leading up to the primary and now heading into the general. By Election Day, my campaign will have touched every corner of the Hamtramck. That’s given me a pretty good idea of who the voters are, what issues they consider important, what they are looking for in a mayor. The personal interactions I’ve had with residents and the hospitality they’ve shown — not just during the campaign, but throughout the years of my service — has been encouraging and humbling. How their good will might play out in the voting booth can’t be predicted, but it’s demonstrated once again the civic engagement and the community spirit of the residents of Hamtramck.

You previously spoke with us on the issue of fire and police retirements. The related millage proposal failed in the subsequent election. You had said that, counter to your opponent’s claims, there are no grants available to fund such obligations. Could you elaborate on where the issue stands now? If elected again, what would be some solutions you could be looking at along with the city manager and Council?

This will be a tough problem to solve for everybody in Hamtramck’s government and, ultimately, for our residents. The financial suggestions that critics of the millage presented amount to small change and don’t begin to plug the multi-million (dollar) budget hole that this pension obligation presents, and that will balloon over the next few years. Right now, we’ve dedicated all proceeds from our sale of city-owned vacant lots to this fund, but that’s just a small fraction of our obligation and just a one-time influx of monies.

We are now forced to dip into our fund balance, but this also just a temporary and incomplete solution. It’s just a matter of time before we’ll be forced to default on this obligation and then it will be sent to the courts, as we warned voters would happen. But this shortfall is also symptomatic of a more widespread crisis regarding pension obligations in communities across the country. Hamtramck isn’t alone, but along with so many other municipalities we’re each forced to find our own solutions to the problems resulting from the larger municipal work forces of the past, longer life expectancies and contract obligations that may have seemed justified decades and decades ago, but which are unsustainable in the 21st century.

Finally, there has been some confusion lately between the role of a mayor in Hamtramck and the role its city manager plays. Could you elaborate on what important role, according to the Charter, a mayor plays in the operations of the city?

Many people assume that the mayor has wide unilateral powers to hire and direct employees, create positions, award contracts and run operations in City Hall. In reality, those kinds of administrative duties largely fall to the city manager, not the mayor or any other elected officials. The Hamtramck City Charter gives the mayor the authority to run City Council meetings, vote in the case of a Council tie and vote on ordinances, the budget and city contracts.

Additionally, the mayor in coordination with City Council sets overall policy for the city manager to follow. The mayor also has authority to make appointments to most, but not all, city commissions, with Council approval. The mayor and city manager alone are authorized to speak in the name of the city. That means that the mayor is also the spokesperson and official public representative of the city. On paper, then, the mayor’s powers are quite limited. What can’t be quantified, though, is the gravitas of the mayor’s title and the ways any individual mayor may choose to enact those responsibilities.

As mayor, I’ve taken very seriously the role I can play in ensuring that everyone — every group and every individual — knows that they are recognized, respected and valued. I’ve done that by attending every event I can and being a visible presence throughout the city; by being accessible in person, by phone, email and social media (I do get messages from constituents at all hours of the day and night) and by taking advantage of every opportunity to tell Hamtramck’s story through the media, through involvement in organizations like the Michigan Municipal League (of which I served on the board and as president) and through attendance and presentations at meetings and conferences. I do it by providing weekly (formerly daily) updates on COVID-19 in Hamtramck, something I’ve done since March of 2020.

These activities dovetail with the all-important role as advocate for the city’s residents, needs and interests. These are things that aren’t required by the charter, but that I see as an essential element of my leadership and something that lets people know they are listened to, represented and valued. It ensures that Hamtramck is at the table and that our interests are respected when important decisions are made by our regional, state and national partners. Over the last 16 years, the residents of Hamtramck have come to know their mayor personally (people often comment on this with surprise), to know they can reach out to me about anything at any time and that I will always respond — not always with the answer they’d hoped for — but honestly. And the media and other leaders have come to know that they can’t overlook the city of Hamtramck. With the election around the corner, and a successful primary indicating strong chances for your campaign, what would you attribute the momentum behind your campaign to?

As I’ve talked to voters during the campaign, one thing is clear: They’re ready for change. People are tired of failing infrastructure, poor public safety and high property taxes in Hamtramck — they recognize that the same old approach won’t fix our problems. I’m proud that our campaign has brought together a diverse group of supporters who are ready for fresh leadership in City Hall.

Your opponent, Mayor Karen Majewski, answered a few questions from us during the primary. Specifically, the issue of Hamtramck’s obligation to fund its fire and police retirement was addressed. Majewski had made clear that grants aren’t available to fund such an obligation, leading the city’s management and Council to come up with a millage proposal, which of course failed. If elected, do you have concrete or specific proposals to address this ongoing issue?

Hamtramck residents already pay one of the highest property tax millage rates in Wayne County — we should not increase the burden on families due to the city’s failure to budget properly. Instead, we should work to attract investment and foster small businesses, which will grow the tax base and increase city revenue. Also, trimming the unnecessary expenditures is another option.

Finally, there has been some confusion lately on the role of a mayor in Hamtramck and the role its city manager plays. Could you elaborate on what role, according to what you know about the Charter, a mayor plays in the operations of the city?

The mayor’s responsibility under the Hamtramck Charter is to set the agenda, preside over City Council meetings and to be the tie-breaker vote in the event of an evenly split City Council. All other administrative roles and day-to-day management fall on the city manager. In this capacity, I intend on working with the City Council to set forth a bold agenda and working with the city manager to ensure projects are being executed according to plan.