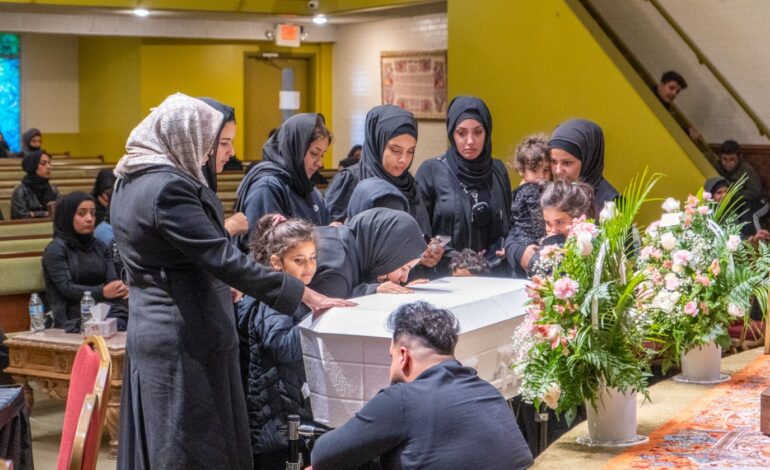 DEARBORN – Tragedy struck the community when a 6-year-old was struck and killed by a driver on a residential street in Dearborn on Sunday.

The Dearborn Police Department said that on Nov. 7, at approximately 2:50 p.m., officers responded to the 7600 block of Bingham Hit on the report of a pedestrian who had been struck by a vehicle. Upon arrival, officers discovered that Batoul Haidar Al Fadawi had severe injuries and determined that the vehicle involved failed to stop after hitting her.

Al Fadawi was a first-grader at Star International Academy in Dearborn Heights. Al Fadawi was rushed to Children’s Hospital, where she succumbed to her injuries. Initial investigation identified the vehicle involved as a silver or white Chevrolet Equinox.

A neighbor’s security camera captured the tragic event, where the young girl ran into the street in an apparent attempt to cross it, a mere moment before Collin’s Equinox enters the frame, striking her and not stopping after the collision.

On Tuesday, police identified 18-year-old Jyon Collins of Detroit as a person of interest in their investigation. Crime Stoppers offered a reward of $5,000 Police told Fox 2 News that Collins went to the police station with a family member and an attorney to turn himself in.

A day later, the city of Dearborn said that as a direct result of the support from local news media and the assistance of the public, Collins responded to the Dearborn Police Department to voluntarily surrender to officials.

Wayne County Prosecutor Kym Worthy charged Collins with one count of “Failure to Stop at the Scene of an Accident Causing Death,” a five-year felony and one count of “Driving While License Suspended,” a misdemeanor.

The prosecutor’s office alleges that Collins was driving southbound on Bingham Street, when he struck Al Fadawi, but does not say that he was driving recklessly or speeding. Al Fadawi was crawling under a car and another car parked behind it, obstructing Collin’s view of her before she ran out into the street. After hitting Al Fadawi, Collins fled from the scene.

He was arraigned Friday afternoon in 19th District Court and given a $50,000/10 percent bond. Collins was given a GPS tether and placed on house arrest. He is only allowed to leave for school, work, or legal appointments.

The incident sparked shock and outrage, and triggered anger over the high number of traffic incidents in the dense city.

A funeral was held for Al Fadawi at the House of Wisdom in Dearborn Heights on Monday, where family, friends and other mourners gathered in front of her casket. One of Al Fadawi ‘s teachers spoke at the funeral.

“Everyone around her just wanted to be around her, her energy was very positive, she was very loving,” said the teacher, who identified herself as Ms. Jawad.

A candlelight vigil was held for Al Fadawi on Bingham street on Tuesday.