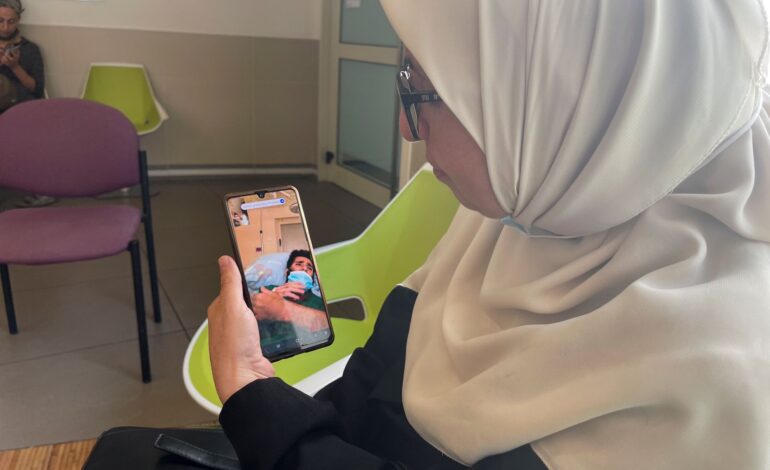 The mother of Palestinian prisoner Miqdad al-Qawasmi, who has been on a hunger strike for more than 100 days, talks to him via video call at the Kaplan hospital in Rehovot, Israel, Nov. 4. Photo: Senan Abu Mayzer/Reuters

A Palestinian prisoner ended a 113-day hunger strike on Thursday after Israel agreed not to extend his detention without trial beyond February, Palestinian officials said.

Miqdad al-Qawasmi’s mother voiced concern for his life earlier this week after his condition deteriorated. The officials said he refused food during the protest, but drank water with salt and was given vitamins and medication by Israeli doctors.

Qawasmi’s weight had nearly halved since July, his family said.

“An agreement has been reached to release the hero prisoner Miqdad al-Qawasmi next February,” said Nahid Fakhouri, director of the Palestinian Prisoners Media office.

“He ended his hunger strike and can begin to eat again, depending on what doctors… allow him to eat according to his health condition.”

Another Palestinian official from the Palestinian Prisoner Association said the February release would coincide with the end of a period of Qawasmi’s so-called “administrative detention”, which would not be renewed.

An Israeli Prisons Authority spokeswoman confirmed that Qawasmi had ended his strike, but had no further information.

Israel can hold Palestinians it regards as suspects for up to 60 days without charge and extend that period with court approval.

The United Nations and European Union have criticized the practice. Israel says the identities of undercover operatives and sources could be compromised by regular court proceedings.

Qawasmi was arrested in January.

An Israeli security official said his detention was “well-founded on intelligence that was presented to a court” regarding his involvement in activity linked to the Islamist Hamas group.

Hamas spokesman Hazem Qassem hailed the deal as a “victory.”

There are some 500 Palestinians held in Israeli jails under administrative detention, Palestinian officials say.

Israel has never released the figure.