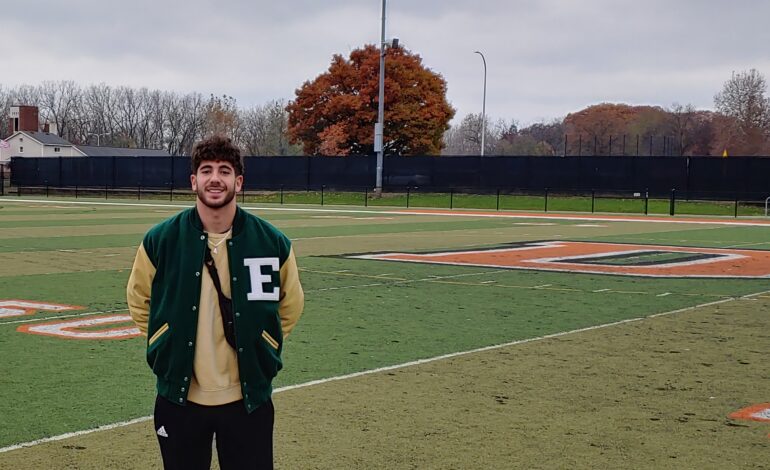 DEARBORN — Dearborn High School alumnus Hassan Beydoun was nominated for the Burlsworth Trophy for a third year in a row; and while not selected, said he hopes his story can inspire others.

Beydoun graduated from Dearborn High in 2017 before going on to study psychology at Eastern Michigan University. He is now in his junior year.

He played football at Dearborn High, but when it came time to look at colleges he was not given any financial assistance from the football organization and only tried out for the EMU football team when he saw a post on Twitter regarding tryouts.

Nominees for the Burlsworth Trophy must have “walked on” or tried out for the team and been accepted to play without any financial assistance from the football organization. They must also excel in their particular position to be considered.

Only 80 athletes out of approximately 1,400 nationwide are considered for the trophy every year.

This season alone, Beydoun, a wide receiver, has had 78 receptions and 863 receiving yards, with four touchdowns.

…it’s about just always chasing what you want, whether it’s football or if it’s something else. If you want something, go get it. – Hassan Beydoun

He said that he hopes his story inspires others.

“I wasn’t recruited out of high school, no offers or anything and even sat out my whole first year of college from playing football,” he said. “But it’s about just always chasing what you want, whether it’s football or if it’s something else. If you want something, go get it. Just because your time schedule doesn’t match up with the normal of other people’s schedules doesn’t mean it would never happen.”

Beydoun also said that while it may feel like the odds are against you, it’s important to never give up.

“Even when people, the world, the odds are against you, just keep chasing,” he said. “If that’s where your passion is, then why settle for something you’re not interested in? I want people to feel inspired and to see that there’s someone else who was in a situation where the odds were against them; and I wouldn’t say I’ve won with it, but I’m still competing. I don’t want people to be discouraged or not do what they want just because someone, even their own parents, don’t agree with it. If you want something, go get it. Sometimes it’s not about money or about any of that, it’s about happiness and what makes you happy.” Beydoun’s parents, Wissam and Leila, said they are very proud of their son.

“Honestly, I just have to say Hassan is my hero in life,” Leila Beydoun said. “He has been my biggest inspiration. Since he was young, he has always been involved in basketball and football and we would just stand outside and just throw the ball to each other. Any minute I had available he would come to me and say ‘let’s go outside’ and we would toss the ball around and I watched him grow from there. I have seen the kind of motivation he has pushed onto other kids and they all look up to him. He really is my biggest inspiration. Regardless of where he is right now, it’s his perseverance that got him there.”