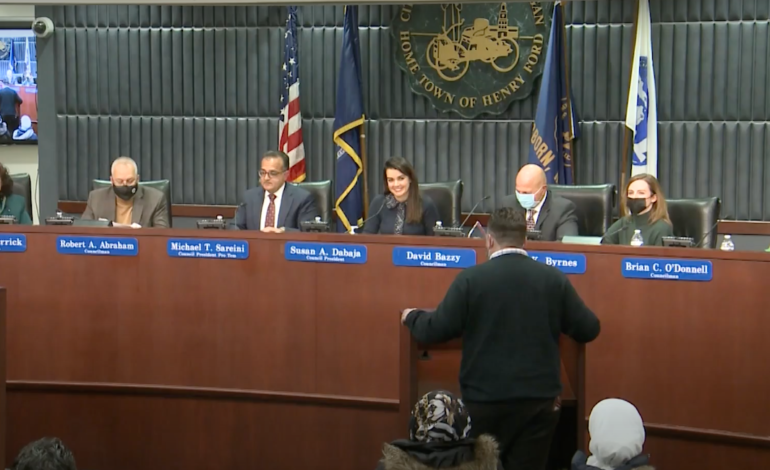 DEARBORN – Dearborn community members and a City Councilman were alarmed and concerned by a last-minute salaried position created improperly at the 11th hour and given to a political appointee as the city transitions out into a new administration and Council, and is facing a massive budget shortfall.

The “Neighborhood Liaison” position was created by the city’s property department and was offered to the city’s public information officer without first being approved by the City Council, as the city’s legal department has said it should’ve been.

Recently, Tim Hawkins, director for Property Maintenance and Development services created the position within the department, which was then offered to the city’s current public information director Mary Laundroche after a Human Resources process.

Directors for various city departments are appointed by the mayor. But a position such as the neighborhood liaison for the property department is a union position filled out under the rules of the Civil Service Commission, and has to be approved by Council as part of its yearly budget approval process.

The new neighborhood liaison position, for which Laundroche was selected, but several outside and internal candidates applied for, carries with it an almost $80,000 salary. The salary amount is less than what Laundroche is given in her current position.

The liaison would presumably communicate neighborhood association meeting priorities to the city department. These duties were previously conducted by the deputy director of the property department along with his other duties, effectively meaning the current neighborhood liaison position is a new and wholly separate one.

It is not clear whether Laundroche had applied to stay on as director of public information under incoming Mayor-elect Abdullah Hammoud’s administration. It appears that she did look to stay on in the city under this new civil service position. Laundroche is slated to resign from her current post mid-December.

After learning about this new position and the selection of Laundroche for it via the city’s HR and property department, Councilman Mike Sareini, who won re-election in November, wondered about the legality of approving such a position by bypassing Council’s approval.

Indeed, after making an inquiry with the city’s legal department, Sareini was told in a memo from Deputy Corporation Councel Jeremy Romer that the position was filled incorrectly under city rules.

Simply put, the neighborhood liaison position was not part of the approved 2022 budget the City Council. The Council approves budget personnel positions for each department as part of its budget process.

After Hawkins received an email form legal about how the position had not been created properly, he brought the issue to Council on Dec 7. to have it approved, even though the position had already been offered to Laundroche. Hawkins argued his department had funding available for the position.

Now in the last minute, this position that was supposed to generate funds that now has excess is being put into a neighborhood liaison position (and given) to a director who is about to retire in the next two years or eighteen months so she can have a job to retire on. – Councilman Mike Sareini

After a nearly hour-long deliberation, in which Council also heard from concerned residents, the body voted 5-1 to approve the creation of the position against the legal departments judgement of the matter. Sareini was the only “no” vote.

“The fact that we had a chief building position that created access funding is not the issue, at all,” Sareini said. “That just means that we had extra money, that position was budgeted by this Council for a specific purpose that generates funds because of the development with Ford Motor Company… that’s what it was for, which would actually would generate revenue.”

“I am in full support that we need a neighborhood liaison but not in this case the way its structured.”

Sareini said that that that dual position that was supposed to bring excess revenue is now being put into a new liaison position and given to a director that is about to resign from her post during a winter time, during snow emergencies and during the inauguration of a new mayor.

He also questioned whether the salary compensation was appropriate during a tough financial time in the city, and given that the role was performed previously as a dual task by the department’s deputy director, who also had building trades licensing and experience.

The new position comes as residents in November voted down a renewal of a 3.5 mil tax levy, a vote that means the city is looking at a budget shortfall of $15 million or more.

Sareini also made a point about the selection of an existing Mayoral-appointee to this new civil service position.

“Now in the last minute, this position that was supposed to generate funds that now has excess, is being put into a neighborhood liaison position (and given) to a director who is about to retire in the next two years or eighteen months so she can have a job to retire on,” Sareini said. Here we are in the 11th hour of this administration and we’re moving a political appointee into a civil service position, which we all are very well aware of how that looks. – Councilman-elect Mustapha Hammoud

These points were echoed during public comments by Councilman-elect Mustapha Hammoud.

“Here we are in the 11th hour of this administration and we’re moving a political appointee into a civil service position, which we all are very well aware of how that looks,” Hammoud said. “If somebody wants to apply for a job, there’s a transition team portal and there are transition team meetings that everyone is welcome to attend.”

Mayor-elect Hammoud has asked for a freezing on hiring of new positions while he creates a transition team, for which his transition team has created a hiring portal for. The city’s HR director said the liaison position was offered a week before the hiring freeze request.

“If we want to maintain trust and integrity in the process of how this city hires people, which is one of the main issues I heard on the campaign trail, this is not how we should be doing a hiring process,” Councilman-elect Hammoud said. “We had a budgetary process earlier this year and we will have a budgetary process next year. I just really wanna understand from Council why this is even going forward.”

The Council eventually voted on the matter of creating the new position, not on the selection of Laundroche for it, with Sareini strongly objecting to the way the position was created and filled out.

Though Councilmembers like David Bazzy acknowledged the legal departments ruling, they presumably agreed that the separate neighborhood liaison position was necessary. Outgoing Councilwoman and President Susan Dabaja told Hawkins she had confidence he would make sure the new liaison earned her salary.

“I wouldn’t want (the city) to hire someone just simply to go the (neighborhood) meetings, or have the bare minimum expectations of what their job obligations or duties were, but knowing you I have a feeling this person will be working to their fullest extent as far as what their responsibilities and duties will be.”