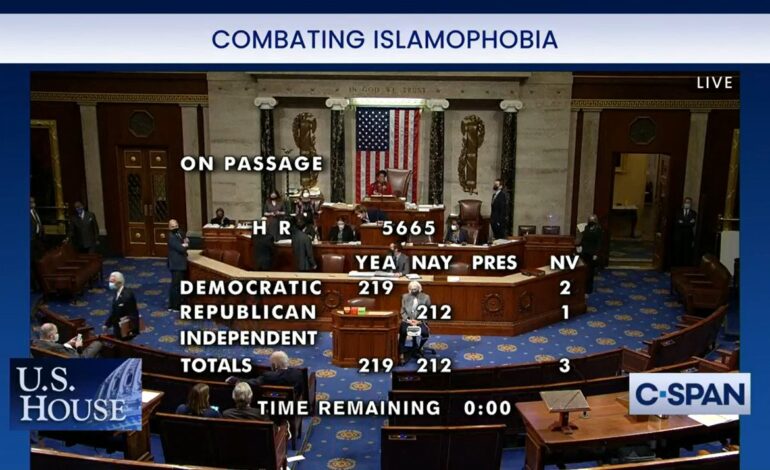 WASHINGTON, D.C. — On Tuesday, the U.S. House of Representatives voted to pass a bill that would establish a special envoy office at the U.S. State Department with the aim to “monitor and combat” international Islamophobia.

The act would establish an “office to monitor and combat Islamophobia” within the State Department. The final vote on the bill was 219-212. No Republican voted for the bill.

In the weeks leading up to the bill, U.S. Rep. Lauren Boebert (R-CO) was widely denounced for comments she made over Thanksgiving break, where she suggested that Omar was potentially a suicide bomber.

Boebert later apologized for those comments, caught in a viral video, but some Democrats pushed ahead with calls for her to be removed from her committee assignments, as well as putting pressure on GOP leaders to condemn her remarks.

Over the Thanksgiving break, Lauren Boebert said she was recently in a Capitol elevator with Ilhan Omar when a fretful Capitol police officer ran up.

Lauren Boebert said: “Well, she doesn’t have a backpack. We should be fine.”

A day after news of the Islamophobia Act in the House, former President Trump announced that he was endorsing the controversial far-right Rep. Boebert for reelection in 2022.

On Tuesday night, during deliberations over the vote, U.S. Rep. Scott Perry (R-PA) claimed Omar, a Somali-born Muslim, was “affiliated with” terrorist organizations.

Previously, Omar was the focus of Islamophobic and racist comments made by another far-right Trump endorsee, Rep. Marjorie Taylor Greene (R-GA). Greene has repeatedly called Omar a member of the “Jihad Squad”, a phrase repeated by Boebert.

A day after news of the Islamophobia Act in the House, former President Trump announced that he was endorsing the controversial far-right Rep. Boebert for reelection in 2022.

In the U.S. Senate, Senator Cory Booker (D-NY) introduced a companion to the bill, joined by original co-sponsor Ben Cardin (D-MD) and Bernie Sanders (I-VT) in introducing the act.

The Combating International Islamophobia Act was welcomed by Muslim organizations.

The Council on American-Islamic Relations (CAIR), the nation’s largest Muslim civil rights and advocacy organization, applauded the act, which was introduced on October 21 and was co-sponsored by 56 Democratic members of the House. In January, the USCMO sent a letter to the Biden administration calling on the U.S. State Department to establish the special envoy position.

The new act, if made law through passage in the Senate, would compel the State Department to develop a more comprehensive approach to fighting the global increase of Islamophobia, increasing its capacity to monitor and confront state and non-state actors.

The Biden administration issued a statement of in support of the House bill.

Organizations have been concerned over rising transnational White supremacist and Islamophobic hate group networks that have inspired their followers to commit acts of anti-Muslim violence and terrorism, including but not limited to the tragic summer 2021 murder of a Muslim family in London, Ontario and the 2019 Christchurch, New Zealand Mosque shootings.

“We wholeheartedly support the passage of this critical bill in the House,” said Wa’el Alzayat, CEO of Emgage Action. “In addition to censuring Rep. Boebert and stripping her of her committee assignments, the passage of this bill will send a clear message: Anti-Muslim sentiment has no place in our halls of Congress. Islamophobic incidents are recurring among the GOP; this issue finally needs to be addressed in a meaningful way.”

Among other Congress members out of Michigan, U.S. Rep. Brenda Lawrence (D-Southfield) also applauded the act.

“Recently, we have seen an alarming increase in the global rise of Anti-Muslim rhetoric, hate crimes and other acts of violence,” Lawrence said. “Whether it is here in the halls of Congress or anywhere around the world, it is vital that we protect people of all religious backgrounds. I applaud my colleagues in the House for being proactive in rooting out Islamophobia wherever it exists.”