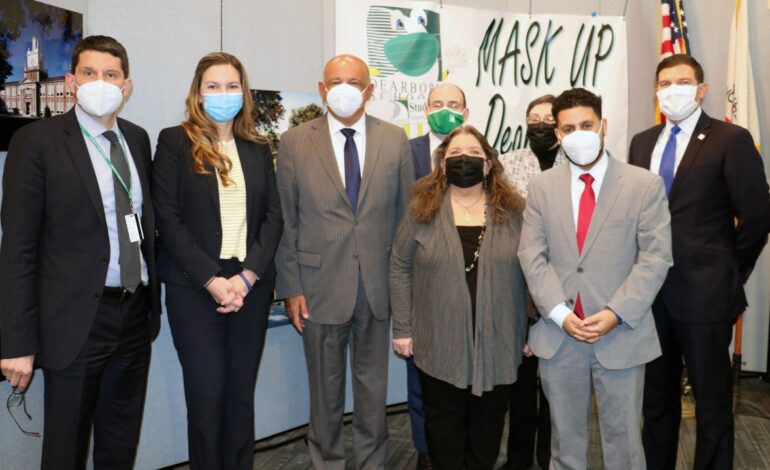 DEARBORN — As part of School Board Recognition Month, Superintendent Dr. Glenn Maleyko thanked trustees for their service and the board was reorganized.

“I want to take a moment to recognize our outstanding board team that we have here in Dearborn,” Maleyko said. “Thank you for your outstanding service to the school community and for your dedication to our vision of students first. This has really been the toughest challenge (the COVID-19 pandemic) I can say in my career and I think a lot of us can probably say for us in our lifetimes.”

Dearborn School Board members are responsible for the third largest school district in Michigan, with an annual budget of $336 million, an enrollment of 20,000 students and 2,700 employees working in 37 buildings.

The board members also serve as trustees for Henry Ford College, making them the only school board trustees in the state who also serve a local college. They evaluate both the superintendent and college president and must keep up to date with issues, laws and legislation impacting both grades PreK-12 and the college.

As the board began its calendar year, it selected new officers, appointing Roxanne McDonald as president, Adel Mozip as vice president, Irene Watts as secretary and Mary Petlichkoff as treasurer.

Henry Ford College President Russ Kavalhuna also thanked the board and said that as a resident and parent, he recognizes that the board is often questioned and scrutinized.

Watts was one of three trustees who won election to a full six-year term in 2020.

Mozip was appointed to the board in April 2019 before being elected to a full six-year term in 2020.

Petlichkoff also won re-election in 2020 and has served on the board for 11 years.

McDonald has served eight years on the board and her current term ends in 2024.

Trustee James Thorpe has served five years on the board and his current term ends in 2024.

Trustee Pat D’Ambrosio was elected to a partial term in 2020 and his term ends this year.

Trustee Hussein Berry has served for 10 years and his term ends this year.