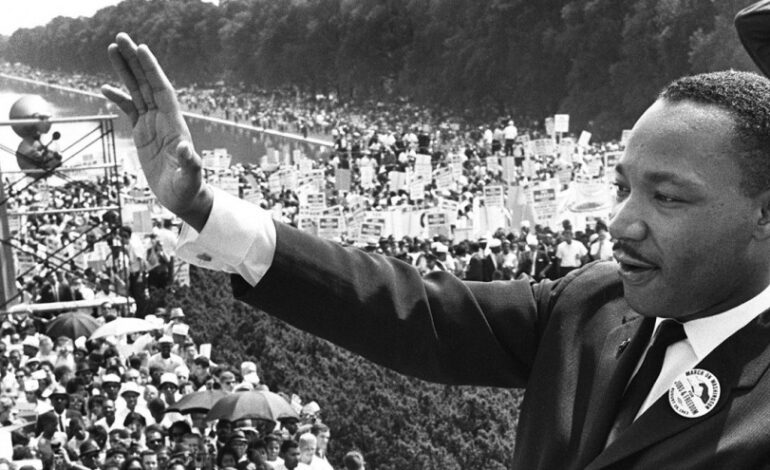 MLK Day, since being signed into law as a national holiday by President Reagan, has come to symbolize a moment of national reflection on the state of race relations in America. Although Dr. Martin Luther King Jr. in the end of his life was a staunch champion against militarism and economic exploitation, seminal moments such as his leading the Montgomery Bus Boycott of 1956 and the Birmingham Campaign of 1963 to end racial segregation most define his legacy as a champion for racial equality in America. As every president since Reagan to law enforcement officials and civic leaders have praised Dr. King, little public discussion is had on the degree in which he faced surveillance and attempted sabotage by law enforcement entities and paid informants.

FBI founding Director J. Edgar Hoover was obsessed with preventing the rise of a “messiah” who would inspire Black Americans as well as non-Black allies to struggle against the status quo whose system exploited Black people for centuries. Hoover’s Counterintelligence Program (COINTELPRO), which was put into place the same year as the Montgomery Bus Boycott, used electronic surveillance, informants who acted as spies and agent provocateurs, and mainstream journalists moonlighting for the FBI to disrupt civil rights organizing and sow seeds of division within the movement.

Provocateurs intentionally peddled bogus information and even set up some activists up to be targets of physical violence by law enforcement. From 1956 until his assassination in 1968, Dr. King, who is seemingly revered today, was not only a hated figure among many White supremacist and liberal war hawks, but was perhaps the most prolific target of spying and dirty tricks of any figure during the civil rights movement era. Surveillance and attempts to destabilize grassroots organizations, however, have not stopped with the assassination of Dr. King and the formal closure of COINTELPRO in 1971.

Just as in the CONITELPRO era in which American Muslims such as Malcolm X, Muhammad Ali and Kareem Abdul Jabbar were surveilled by the FBI and New York Police Department (NYPD), governmental spying on American Muslim and Arab American activists ranging from agencies such as the National Security Agency (NSA) to the NYPD continued. Perhaps as disturbing, however, has been destabilization efforts, which include spying perpetrated by non-profit organizations who seek to marginalize American Muslims and Arab Americans. In 1993, the Anti-Defamation League of B’nai B’rith (ADL) agreed to a settlement in federal court due to accusations that it spied on the American-Arab Anti-Discrimination Committee (ADC) and others that were organizing against apartheid in South Africa.

More recently in late 2021, the Investigative Project on Terrorism (IPT) was exposed for using moles to spy on activities of CAIR and other Islamic organizations and centers as well as a prominent Muslim politician. In the case of the latter, IPT allegedly turned over information about plans of American Muslim leaders gathered by a Muslim mole to an Israeli security official during the Netanyahu regime.

As much as times change, certain things stay the same and surveillance and dirty tricks against those standing for justice has a prolific history in the United States. It is not surprising that those in America who strive to walk in the footsteps of Dr. King would be spied upon and that there would be efforts to destabilize their activities today. As we cannot be overly suspicious to the point of being paralyzed by fear, we know that there will always be individuals who work with racists and anti-Muslim bigots for their own narrow agendas. It is important that we reflect on this reality beyond MLK Day and more importantly that none of us succumb to our egos or seek monetary gain to collaborate with those who actively work the destabilization of our communities.

— Dawud Walid is the executive director of the Michigan chapter of the Council on American-Islamic Relations (CAIR-MI) and is a member of the Imams Council of Michigan.