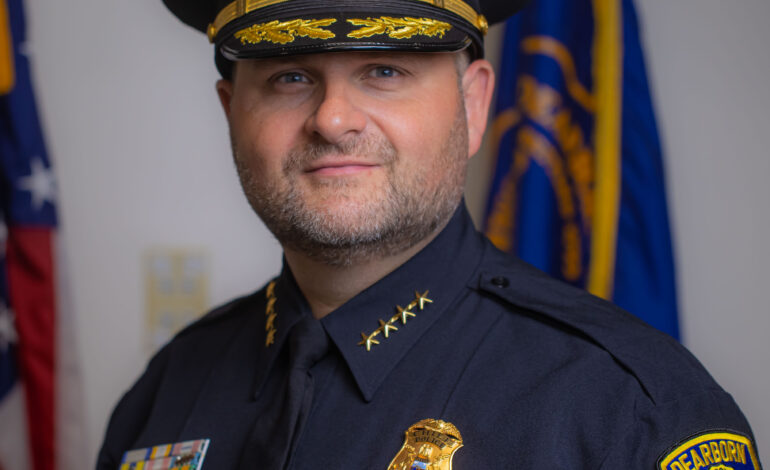 DEARBORN — With a focus on accountability, Dearborn Police Chief Issa Shahin has outlined his plan to combat the problems that residents care about the most.

Residents have been very vocal in their concerns over reckless and distracted driving throughout the city as well as an increase in violent crimes.

Shahin said that while violent crimes have increased nationally over the last couple of years, the number of violent crimes are down in Dearborn, but the department is looking forward.

The number of tickets have gone up dramatically in the last few months because we have created a traffic division dedicated to traffic issues. — Dearborn Police Chief Issa Shahin

Shahin said that his department and Mayor Abdullah Hammoud’s administration have a three-pronged approach they are implementing to combat the driving concerns in Dearborn.

“It’s essentially three parts,” he said. “The first part is going to be an engineering component, so we are going to be looking at things that we can do for traffic calming measures. That might include things like traffic humps, intersection bumpouts or bike lanes. A lot of the data suggests that through engineering measures you can slow people down.” Dearborn Police Chief Issa Shahin with his wife, Diana Ramouni Shahin, and Mayor Abdullah Hammoud during his swearing in ceremony. – Photo courtesy of the Dearborn Police

The second part of the plan will be focused on education.

“It’s going to be more than just a public messaging campaign,” Shahin said. “We are going to have a very aggressive public messaging campaign to educate the community and the public about the dangers of reckless driving and speeding. It’s going to involve not just the city administration and police department, but the community as well as they are going to play a really pivotal role in the education campaign.”

Another part of the education component, Shahin said, includes a partnership with the Dearborn Public Schools.

The third component will be enforcement.

“The one thing that we’ve done, and it doesn’t just deal with driving but really with everything as it relates to our service to the community, is we’ve listened to the residents,” Shahin said. “We are going to be responsive to the things that matter to them. From an enforcement perspective, we are going to get back into the neighborhoods. We’ve set a priority on being responsive to what matters to residents and that means being in the neighborhoods and not in the business districts or some of the other areas.”

Shahin said that a major focus with enforcement is going to be focusing on the larger issues at hand. I recognize the history that Dearborn has and it’s critically important to me that everyone feels welcome. I believe that you can have an equitable policing model that treats everyone fairly, but also removes criminals from the streets. — Dearborn Police Chief Issa Shahin

Historically, officers would chase down drivers with dangling ornaments or plate and equipment issues in the hopes of finding someone with a suspended license or maybe a weapon of some kind, but, Shahin said, they might stop 100 cars and only get one gun while alienating 99 other drivers.

One of the first things Shahin did under Hammoud’s leadership was take an assessment of deployment strategy to get more police on the streets.

Shahin said that when it comes to violent crimes data is important, but people’s perception of crime is more important.

“While data points are important, what’s more important is what people feel and do they feel safe,” he said. “Those are the kinds of conversations I want to have with residents because I could sit here all day and tell you that crime is down 8 percent, but if you don’t feel safe then it doesn’t really matter.”

One of the first things Shahin did under Hammoud’s leadership was take an assessment of deployment strategy to get more police on the streets.

“I’ve been looking at a number of opportunities and have been able to increase the number of police officers on the streets and that’s going to directly translate to improve public safety,” he said. “Getting back in the neighborhoods is going to improve public safety because those crimes are happening in our neighborhoods. Having more police on the streets, focusing on the things that matter are going to help. I intend on creating a neighborhood police officer program and so those are going to be police officers dedicated to establishing relationships, not only with residents and community members, but with business owners as well.”

Shahin said that everyone’s voice matters and it’s important to him that everyone feels welcome, as Dearborn is a welcoming community.

“I recognize the history that Dearborn has and it’s critically important to me that everyone feels welcome,” he said. “I believe that you can have an equitable policing model that treats everyone fairly, but also removes criminals from the streets. I don’t believe that those two theories are mutually exclusive. One of the things that I touched on as it relates to policing is what we are going to be enforcing and pulling people over for and I think that is a key component to reducing the racial disparities during traffic stops.”

Shahin also said that he is excited to build relationships with residents and other communities as well.

“My entire focus is on service to the community and supporting the men and women of this police department,” he said. “Those are my two jobs. When it comes to service to the community, I can assure you that everyone’s voice matters and I’m excited about meeting with residents when I don’t necessarily have the answers, so we can come up with and find the answers together.”

With a focus on being transparent, Shahin said the district will be launching a data dashboard soon.

“I firmly believe that we should be transparent and accountable to the community,” he said. “So the data, the traffic crash data, complaint information, all of that is going to be made available. In the next month, we are going to have a dashboard on the department’s site. It’s not my data, it’s the people’s data and I’m going to be an open book with the community because I have nothing to hide.”

The dashboard would update in real time within two to three days of an incident occurring, so residents would have full visibility to the statistics. The initiative is currently in progress and Shahin said he expects it to be completed within the next month.