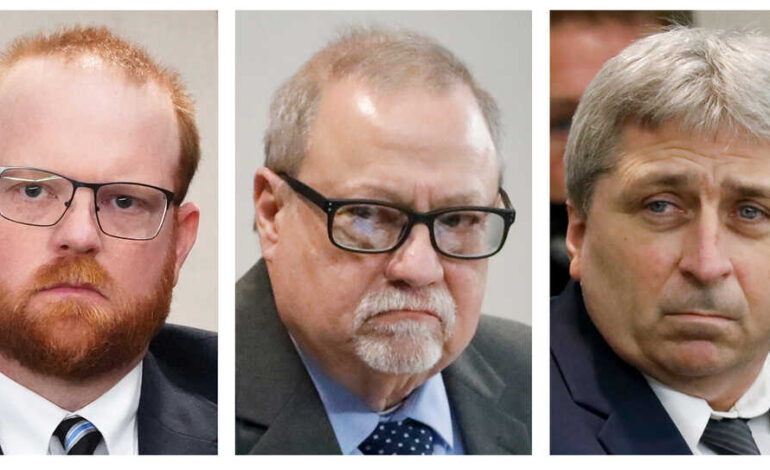 BRUNSWICK, GA — A federal jury has found the three men convicted of killing Ahmaud Arbery guilty on all counts of interfering with the victim’s civil rights, almost a year after the young man’s death.

The jury told Judge Lisa Godbey Wood that they found father and son Greg and Travis McMichael and their neighbor, William “Roddie” Bryan, guilty of violating Arbery’s civil rights and targeting the 25-year-old, unarmed man while he was out jogging because he was Black.

All three men were found guilty of murder in November and were sentenced to life in prison. Wanda Cooper-Jones, Arbery’s mother, thanked everyone who stood by her during “this long stressful fight” after the verdict was read.

“I knew Ahmaud’s hands were in this from the very beginning,” she said. “The way Ahmaud left here, I knew we’d get victory in the state level and in the federal level. I knew that from day one.”

Prosecutors said that Arbery’s slaying was motivated by “pent-up racial anger” that was revealed by the defendants’ electronic messages as well as witnesses hearing them make racial comments.

The FBI had uncovered roughly two dozen racist text messages and social media posts by all three men in the years and months preceding the shooting, including an incident in 2018 when Travis McMichael had commented on a Facebook video of a Black man playing a prank on a White person saying, “I’d kill that f—ing n—-r.”

Defense attorneys said that while their clients had each expressed offensive opinions about Black people, their pursuit or Arbery stemmed from the suspicion that he had committed crimes, not because of his race.

The murder of Arbery on Feb. 23, 2020, initially fell under the radar until a video of the killing was released that May and drew national attention.

When the investigation began, the McMichaels told police they thought Arbery was a fleeing burglar when they armed themselves and pursued him in a pickup truck while he jogged through  a neighborhood. During their murder trials, the defense said Travis McMichael had encountered someone in a similar circumstance and that he and his father were concerned about recent break-ins.

The video was recorded by Bryan and showed Arbery running between the vehicles operated by Bryan and the McMichaels and briefly disappearing from view. The video then shows Arbery in a scuffle with Travis, who fatally shoots Arbery, who collapses after trying to run a few more steps.