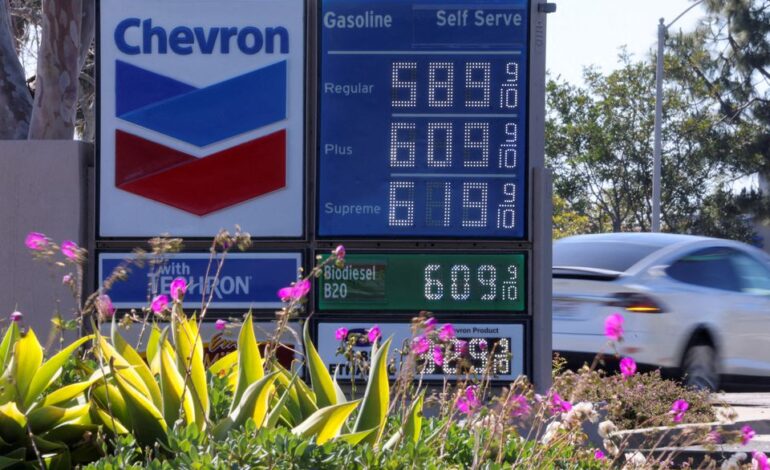 Americans are now experiencing soaring gas prices, surging more than 30 percent since Russia invaded Ukraine and the U.S. and other countries imposed a raft of sanctions.

The Biden administration has already begun looking at scenarios in which oil tops $200 a barrel, with gas stations already topping $4 a gallon in many places.

USA Today reported prices reached a record, topping a high that had stood for nearly 14 years.

Prices went up to $4.07 on Monday and $3.61 a week earlier, but then hit new highs Tuesday morning, when the average national price for a gallon of regular gasoline touched $4.17, according to AAA — the highest price ever, not accounting for inflation.

Gas prices are likely to keep rising. The fuel-savings app GasBuddy projects prices will probably average $4.25 in May and stay over $4 until November.

Russia is the second-largest oil producer in the world, behind the U.S.

But Patrick De Haan, an oil analyst, said the chances of gas prices averaging over $5 nationally are still somewhat remote.

“Just trying to provide some thought in case it’s useful on our current #gasprices situation,” De Haan said over Twitter. “The chance of $5/gal nationwide average is climbing — but I still think the chances are somewhat remote. Perhaps a 10 percent chance, and while a few states could get there, most might avoid.”

Just trying to provide some thought in case it's useful on our current #gasprices situation. The chance of $5/gal nationwide average is climbing- but I still think the chances are somewhat remote. Perhaps a 10% chance, and while a few states could get there, most might avoid.

So far, the Biden administration’s response to the crisis at the pump is to blame Russia, coalescing around the phrase “Putin price hike” to describe the energy inflation challenges created by Russia’s invasion of Ukraine and retaliatory Western sanctions.

“I’m going to do everything I can to minimize Putin’s price hike here at home,” Biden said in a Twitter post on Tuesday.

A Reuters/Ipsos poll conducted on Monday and Tuesday found that some 80 percent of respondents — including solid bipartisan majorities — said Americans should not buy oil or gas from Russia during the conflict even if it causes gasoline prices to increase.

Republicans hoping to win control of Congress from Biden’s Democratic Party in November have been unrelenting in their criticism of his handling of the energy issue.

In recent weeks, they have begun selling stickers that can be placed next to gas pump prices, depicting Biden pointing and saying: “I did that.”

Republicans say Biden has the power to unleash far more energy production than is currently taking place in the U.S., while administration officials say U.S. oil companies are not taking advantage of all available drilling permits, Reuters reported.

In response to the crisis, Michigan’s Governor Whitmer joined several other governors this week to call on Congressional leadership to pass the Gas Prices Relief Act to suspend the federal gas tax.

The bill would authorize the U.S. Department of Treasury to transfer general fund dollars to replace the temporarily lost revenue of a halted federal gasoline excise tax. The Infrastructure Investment and Jobs Act (IIJA) has dedicated an additional $118 billion to the Highway Trust Fund, so that the fund’s capacity to finance construction and maintenance of roads, bridges and highways across the country would not be diminished by the legislation, the governors said in a letter.

“For these reasons and more, we know it is possible to invest in infrastructure and also provide meaningful relief to consumers at the pump,” the letter read. “At a time when people are directly impacted by rising prices on everyday goods, a federal gas tax holiday is a tool in the toolbox to reduce costs for Americans, and we urge you to give every consideration to this proposed legislation.”