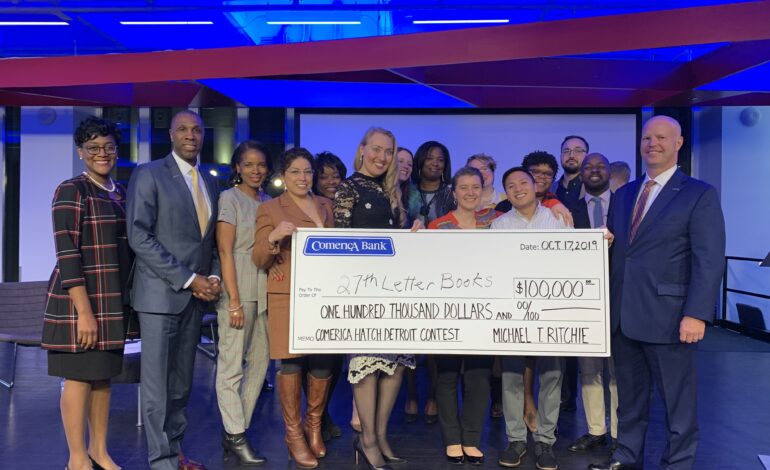 The contest, which is returning for the first time since 2019, aims to promote small business economic development in Detroit.

Entrepreneurs with a retail concept looking to open a physical location in Detroit, Highland Park or Hamtramck can now submit their business plans on the Hatch Detroit website through May 12.

The four-month contest includes two rounds of public voting – Top 10 and Top 4 — allowing the community to vote for their favorite businesses to win the $100,000 grand prize from Comerica Bank as well as a package of accounting, legal, IT and public relations support from Hatch Detroit and its partners.

The Comerica Hatch Detroit Contest concludes Thursday, July 21 with the annual “Hatch Off.”

Comerica is also expanding on its investment of the contest with economic development programming though technical assistance and financial education. Support will occur during the Comerica Hatch Detroit contest and with both Hatch Detroit and TechTown alumni following the contest.

Since Comerica and Hatch Detroit’s partnership began in 2012, Comerica Bank and the Comerica Charitable Foundation have contributed $660,000 in startup funding to support the winners of the annual neighborhood retail competition, as well as direct organizational support funding to Hatch Detroit.

Find out more at: hatchdetroit.com/contest

July 21: Winner announced at Hatch Off

Hatch Detroit, founded in 2011, supports both existing and new retail initiatives in the cities of Detroit, Highland Park and Hamtramck.

“Our focus from the very beginning of the Comerica Hatch Detroit Contest was not only to launch one business, but to create an entire ecosystem of support that stimulates opportunities for entrepreneurs and generate a network of businesses who are prepared to navigate the challenges of launching a new venture in Detroit,” said Vittoria Katanski, executive director of Hatch Detroit. “The past two years have added to those challenges and we worked closely with our alumni keep their doors open. With the tremendous support of our partners, now is the time to present this contest once again to entrepreneurs and support new business growth in our city and neighborhoods.”

“Hatch Detroit has become a vital resource for entrepreneurs and small business incubation over the past decade,” said Mike Richie, Comerica Bank Michigan market president. “The impact Hatch Detroit has made on growing and developing opportunities throughout Detroit is leaving an indelible mark on the economic revitalization of the city.”