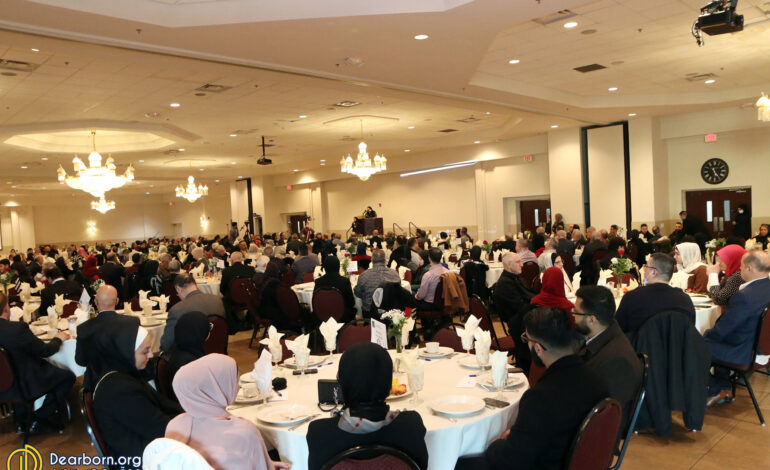 The gathering saw an immense show of support for the organization that has been doing critical social and humanitarian work for Lebanon’s most vulnerable populations for decades.

The gathering of some 1,000 attendees was the first of two separate, unrelated large scale gatherings last weekend, which marked a return to large public events in the community since this winter’s major spike in COVID-19 cases.

In attendance were ISF President and renowned Lebanese activist Rabab Al-Sadr, her sons, Raed Charafeddine (former vice governor of the Central Bank of Lebanon) and Nijad Charafeddine, ISF general director, and many notable political, religious and social figures in the community.

The event featured speeches by Al-Sadr, Nijad Charafeddine and Sadr Foundation USA Board Member Mona Fawaz-Hammoud. Suehaila Amen served as the event’s mistress of ceremonies. The U.S. branch of the ISF  is located in Dearborn.

Videos were shown highlighting the importance of donating to the foundation, a young woman’s journey from being an orphan at the ISF to now being a foundation employee and the work the foundation during these particularly difficult times in Lebanon.

The fundraising event sold some 550 paid tickets, with more people donating on top of that, culminating in more than $100,000 raised, The Arab American News learned. The foundation began with the work of founder Imam Moussa Al-Sadr, Rabab’s brother, who built facilities and organizations in support of women, orphans and other vulnerable people in Lebanon. Al-Sadr served as a trusted interfaith leader and civil servant in the southern part of the country during the 1960s and 1970s, at a time where tensions between religious communities were high and the people needed his leadership and unwavering dedication to charitable work.

On August 25, 1978, Imam al-Sadr and two companions departed for Libya to meet with government officials at the invitation of Muammar Gaddafi to discuss issues related to the conflicts in Lebanon during this time.

While waiting for an appointment on August 31, the three dignitaries were seen boarding a car headed towards the airport, but disappeared and have not been heard from since.

Despite Al-Sadr and his companions’ disappearance, his legacy has continued to this day through the generous support of the Sadr Foundation USA’s staff and donors, who continue to fund critical infrastructure programs serving the needy in both Metro Detroit and Lebanon.

“Lebanon’s history has always been fraught with difficulties, but the past two years have been the most grueling yet, by all standards,” Nijad Charafeddine told The Arab American News. “Like other countries around the world, we are still suffering from the impact of the pandemic, as well as from the repercussions of the financial and economic collapse.”

To give an idea of the foundation’s work, in 2021, the foundation — with the help and support from the community and the Lebanese diaspora — was able to deliver nearly 93,500 health services, with 51,000 visits to its health and social centers and 6,000 vital social services in South Lebanon and in the Tyre Cultural Compound.

At the same time, 260 young women pursued their training at the Nursing School and through the Accelerated Vocational Training Programs. Similarly, 220 young men and women undertook accelerated technical courses towards the labor market.

In-person learning was also resumed for 1,600 young women, half of whom are entirely reliant on the foundation to meet their education, health, clothing, nutrition and other needs. These include 50 female university students pursuing their education in Lebanon and abroad.

“Our short-term lists of beneficiaries include full coverage to nearly 530 orphaned female students and urgent cases, along with their families (and) 5,000 households in dire need of food and medicine vouchers, in addition to the usual beneficiaries of our health and social centers,” Charafeddine said.