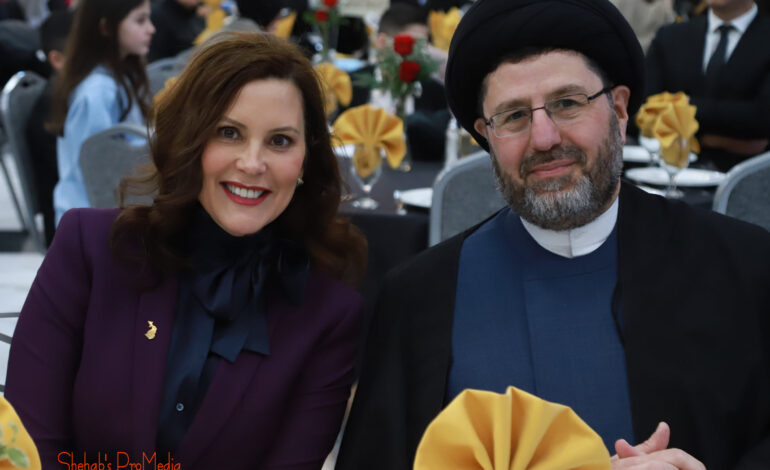 DEARBORN HEIGHTS — The Islamic Institute of America (IIOFA) in Dearborn Heights held its fifth annual fundraising dinner at the Bint Jebail Cultural Center last Sunday to a packed audience of state and local officials and the community.

The large gathering of more than 800 attendees marked a return to full-scale events in the community after COVID-19 cases have come down from a major spike over the winter.

The event saw special guest speakers, including Governor Whitmer and U.S. Rep. Rashida Tlaib (D-Detroit). U.S. Rep. Debbie Dingell (D-Dearborn) and the mayors of Dearborn and Dearborn Heights, Abdullah Hammoud and Bill Bazzi, were also in attendance, as were several other officials. “The Islamic Institute and so many other organizations in Metro Detroit are a beacon of light in the Muslim American world,” Whitmer said. “They are the pride of Michigan and of the United States.

“I know Ramadan begins in just a few weeks and hope those of you who are already fasting twice a week to prepare are excited for such a holy time of year when you come together with family and friends. In 2019, I hosted an iftar dinner at the Governor’s Residence, the first time in Michigan history that such an event was hosted. I look forward to attending another dinner this year.”

Videos were shown of interviews with the mosque’s leaders and the community, reflecting on the work of the important institution in Dearborn Heights in the last five years. Although the goal of the dinner was similar to those in previous years — raising funds in supports of the large mosque — this year the mosque’s leadership announced a major development.

That announcement: The IIOFA will be moving to a new, expansive, multi-million dollar worship and community facility on some seven acres of land in Dearborn Heights, thanks to generous donation from a community member.

“We are now at a major crossroad where we are heading towards a very promising future,” IIOFA founder Imam Sayed Hassan Qazwini told The Arab American News. “We are going to build a 44,000 square foot mosque that will include a prayer hall, a banquet hall with a kitchen, a school, administrative offices, bookstore, etc. That is the first phase.”

The second phase will include building a big gymnasium for the area’s youth. A parking lot will accommodate some 600 cars. The land, on Beech Daly Road, was donated by Haj Mike Shahadah.

The development is projected to cost an estimated $10 million and could take up to two years to complete, with a ground breaking to occur this summer.

Qazwini said that as the mosque’s congregation grew over the years, it simply outgrew the current IIOFA facility on Ford Road and had problems accommodating important events like Ashura and Ramadan.