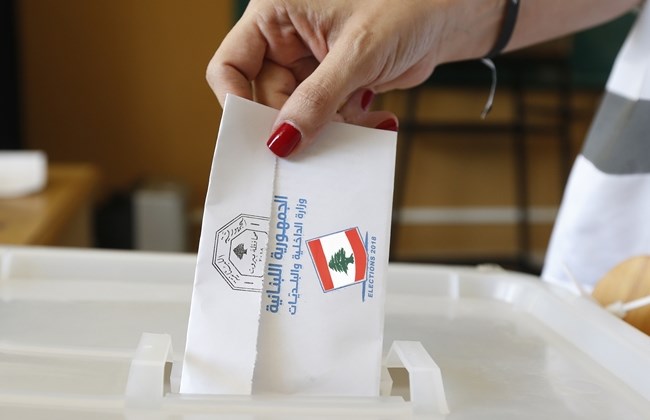 A Lebanese voter casts a ballot in the country's 2018 election. AP photo

U.S. Rep. Debbie Dingell (D-Dearborn) is joining a group of two dozen U.S. House members to urge the Biden administration to work with Lebanese officials to ensure that the upcoming parliamentary elections on May 15 are carried out on time, transparently and free of corruption.

The group sent out a letter to Secretary of State Antony Blinken this week. Among the names on the letter were House Foreign Affairs Committee Chairman Gregory Meeks (D-NY), U.S. Reps. Darrell Issa (R-CA), Dan Kildee (D-MI) and more.

“With dueling political and economic crises, the May parliamentary elections are the first opportunity the Lebanese people will have to cast their ballots since protests in the country began in 2019 after years of corruption and mismanagement,” the letter read. “We concur with Ambassador Dorothy Shea that in holding elections on time, there is ‘no wiggle room’ and that the failure to do so should result in swift condemnation for those responsible in any delay.”

The group said the Biden administration should speak out against anyone who instigates corruption, disruption, postponement or cancellation of the upcoming parliamentary elections.

They also asked the administration to collaborate with organizations planning Lebanon’s election monitoring effort on the ground and to ensure that “diaspora voting outside of Lebanon occurs on time, transparently and votes are independently counted and reported in a manner consistent with current law.”

The May parliamentary elections are the first opportunity the Lebanese people will have to cast their ballots since protests in the country began in 2019 after years of corruption and mismanagement. — Letter from U.S. House members

They also looked for support for Lebanese Armed Forces and Internal Security Forces and for the country’s civil society.

“ATFL commends Chairman Meeks, Rep. Cicilline, Rep. Issa, Rep. LaHood, and all co-signatories for their bipartisan leadership in standing with the Lebanese people,” said Ed Gabriel, president of the American Task Force on Lebanon (ATFL), a leadership organization of Americans of Lebanese descent. “We encourage Secretary Blinken and the Biden administration to prioritize support for free, fair and on-time elections in Lebanon over this next month.”

ATFL said it has been meeting with House members and their staffs to discuss the need for U.S. support leading up to the parliamentary elections.

Seven hundred eighteen of the candidates who filed with the Lebanese Interior Ministry for the election are now in the running, up 20 percent from 2018. These candidates collectively appear on 103 lists.

Lebanon is split into 15 electoral districts, with some of those districts split further into sub-districts.

The largest number of those lists and candidates are from the North II district, which constitutes three minor districts, Tripoli, Minnieh and Dennieh.

One hundred eighteen women candidate made it onto lists, though men are still the overwhelming majority of list members, at 84 percent, according to the publication L’Orient Today, which published the lists on its website.

Eighty-seven of 89 current MPs (Members of Parliament) are also on the lists.

L’Orient said that observers of the country’s Oct. 17 opposition movements will likely spend some of the coming days deciphering the implications of the list formation process for the emerging political movements.

Lebanon’s political fragmentation proceeds amid crippling economic conditions for most of its population.

According to the U.N., around 80 percent of the country’s 6.5 million population is classed as poor. UNICEF has said that last September more than half of families had at least one child who skipped a meal compared with just over a third in April 2021.

Lebanon’s banks are paralyzed, with savers locked out of U.S. dollar accounts, and the country continues to see energy shortages and immense fuel costs.

Earlier this year, Lebanon’s three-time Prime Minister Saad al-Hariri, who is also  the leader of the Future Movement, withdrew from politics, saying that there was no room for positive developments in the country “in the light of Iranian influence, international disarray, national division, sectarianism and the collapse of the state.”

But former Future Movement Vice President Mustapha Allouch is in the running and believes that the potential for further expansion of Hezbollah’s influence in politics will drive people in his populous northern district to vote for him, though many Lebanese have declared they little confidence in the process.

Last month, current PM Najib Mikati said he would stay on in his duties to avoid giving anyone an excuse to delay the scheduled parliamentary election. Mikati will not run in the election itself.

Lebanese political observers estimate that the withdrawal of such influential figures may affect voter turnout.