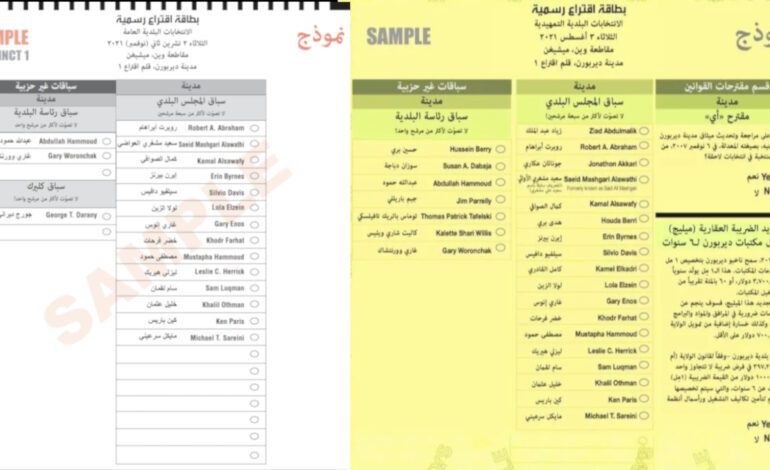 DEARBORN – Wayne County Clerk Cathy Garrett appeared at the Dearborn City Council meeting this week to give her input, in public, to the city’s present language access efforts.

The Council passed a resolution in March, brought forth by Councilman Mustapha Hammoud, that sought to ensure ballots and other election materials would be translated into multiple minority languages.

The resolution sought to bring much needed basic U.S. Voting Rights Act (VRA) provisions around language to Dearborn voters. The VRA dictates that translated materials be provided to any group that is 5 percent or more of the population or 10,000 or more people.

Historically, the decennial U.S. Census categorizes Arab American as “White.” But a five-year American Community Survey (ACS), run by the Census Bureau, gives a more accurate description of the language needs of the local community.

The Census Bureau says that one of the main purposes of collecting information on “languages is for Voting Rights determination.”

The resolution seeks to emulate the spirit of the VRA and to use ACS data to measure what kind of languages need to be translated in Dearborn — in this case Arabic.

Soon after the resolution passed, Garrett sent a letter to Michigan Secretary of State Jocelyn Benson with multiple concerns, saying that she had not been consulted about this particular resolution beforehand and that there is no federal mandate to cover Arabic as a minority language for Dearborn.

The Secretary of State’s Office (SOS) responded to that letter by saying the law does not prevent jurisdictions from translating ballots to other languages, even if the language is not specifically covered by the VRA, and that state and federal law doesn’t prohibit printing ballots in other languages in addition to English.

Benson, who appeared at the Dearborn City Council meeting in support of the resolution at the time of its passage, has taken an active interest in language access for elections.

At the Council meeting this week, Garrett made clear that she is not opposed to the ballots being translated.

“The secretary of state’s support for expanding the voting accessibility in the city of Dearborn I agree with,” Garrett said. “However, it should’ve also been coupled with an established procedure or pathway forward to implement this Council’s resolution.”

The SOS has informed Garrett that she can simply replicate the procedure it has in place for translating election materials, including election ballots, for Bengali-speaking residents.

Hamtramck has been obligated federally to provide election translations in Bengali, and has been since 2011, since it is a South Asian language covered under the VRA.

Garrett said she believes Benson’s mere appearance gave the impression that the resolution was sufficient to implement “a process from a local level that has historically been federally mandated.”

Garrett also said the county currently has a contract with its voting systems vendor, Dominion, to provide official languages in English and Bengali. To include another language would require contract modifications. She suggested that the Council needs to revise the resolution to specify “the stated language and dialect” and from the clerk that resolution needs to be submitted to the Wayne County Election Commission, which she is a part of, to vote on it.

Hammoud addressed these concerns. He said the contract between Dominion and the county does allow for multiple non-English languages other than Spanish and Bengali.

“Based on current ACS data, we see that Arabic is a (major language) for the city of Dearborn… it’s an enormous language spoken at home an English proficiency is not as high as it should for an electorate of our size,” Hammoud said.

Garrett insisted that her concerns come from a lack of “procedure in place.”

“This has the potential to start a (precedent),” she said. “That fact that there’s not procedure in place, that’s why I’m here.”

A procedure for translations was in place for the county, in Hamtramck, Hammoud said, though Garrett said the turnaround time for that process was different. The resolution asks the Dearborn clerk to translate ballots in time for the August primary. But the SOS has said the county can simply replicate those longstanding procedures from Hamtramck to Dearborn.

The county is in charge of formatting and printing election ballots.

On Monday, the Hamtramck City Council unanimously passed a very similar language access resolution to translate ballots and other election materials in Arabic.

Though Dearborn City Clerk George Darany has raised concerns about the time frame and costs associated with the translations, the SOS, the city’s administration and local non-profit groups have offered their assistance, with the SOS saying it is confident the translations can be achieved.

For the last two years, Dearborn has translated sample ballots for elections into standard Arabic, understood widely among Arabs.