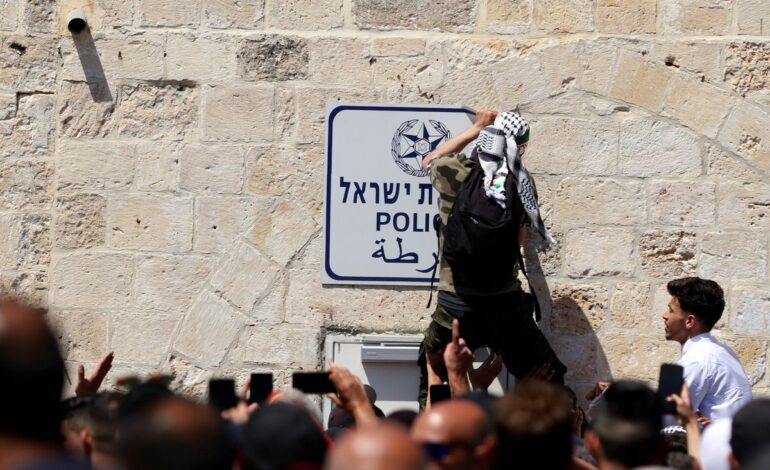 A Palestinian man takes a police sign off a wall at the compound that houses Al-Aqsa Mosque, known to Muslims as Noble Sanctuary and to Jews as Temple Mount, following Israeli forces attacks on Palestinians in Jerusalem's Old City April 15. Photo: Ammar Awad/Reuters

There is a reason why Israel is insistent on linking the series of attacks carried out by Palestinians recently to a specific location, namely the Jenin refugee camp in the northern West Bank. By doing so, the embattled Naftali Bennett’s government can simply order another deadly military operation in Jenin to reassure its citizens that the situation is under control.

Indeed, on April 9, the Israeli army has stormed the Jenin refugee camp, killing a Palestinian and wounding ten others. However, Israel’s problem is much bigger than Jenin.

If we examine the events starting with the March 22 stabbing attack in the southern city of Beersheba (Bir Al Saba’) – which resulted in the death of four – and ending with the killing of three Israelis in Tel Aviv – including two army officers – we will reach an obvious conclusion: these attacks must have been, to some extent, coordinated.

Spontaneous Palestinian retaliation to the violence of the Israeli occupation rarely follows this pattern in terms of timing or style. All the attacks, with the exception of Beersheba, were carried out using firearms. The shooters, as indicated by the amateur videos of some of the events and statements by Israeli eyewitnesses, were well-trained and were acting with great composure.

An example was the March 27 Hadera event, carried out by two cousins, Ayman and Ibrahim Ighbariah, from the Arab town of Umm al-Fahm, inside Israel. Israeli media reported of the unmistakable skills of the attackers, armed with weapons that, according to the Israeli news agency, Tazpit Press Service, cost more than $30,000.

Unlike Palestinian attacks carried out during the Second Palestinian Intifada (2000-05) in response to Israeli violence in the occupied territories, the latest attacks are generally more pinpointed, seek police and military personnel and clearly aimed at shaking Israel’s false sense of security and undermining the country’s intelligence services. In the Bnei Brak attack, on March 29, for example, an Israeli woman who was at the scene told reporters that “the militant asked us to move away from the place because he did not want to target women or children.”

While Israeli intelligence reports have recently warned of a “wave of terrorism” ahead of the holy month of Ramadan, they clearly had little conception of what type of violence, or where and how Palestinians would strike.

Following the Beersheba attack, Israeli officials referred to Daesh’s responsibility, a convenient claim considering that Daesh had also claimed responsibility. This theory was quickly marginalized, as it became obvious that the other Palestinian attackers had other political affiliations or, as in the Bnei Brak case, no known affiliation at all.

The confusion and misinformation continued for days. Shortly after the Tel Aviv attack, Israeli media, citing official sources, spoke of two attackers, alleging that one was trapped in a nearby building. This was untrue as there was only one attacker and he was killed, though hours later in a different city. People attend the funeral of Palestinian Ahmed al-Sadi, who was killed by Israeli forces during a raid, in Jenin in the Israeli-occupied West Bank April 9. Photo: Mohamad Torokman/Reuters

Palestinians, whether in Jenin or elsewhere, fight back because they are denied basic human rights, have no political horizon, live in extreme poverty, have no true leadership and feel abandoned by the so-called international community.

A number of Palestinian workers were quickly rounded up in Tel Aviv on suspicion of being the attackers simply because they looked Arab, evidence of the chaotic Israeli approach. Indeed, following each event, total mayhem ensued, with large mobs of armed Israelis taking to the streets looking for anyone with Arab features to apprehend or to beat senseless.

Israeli officials contributed to the frenzy, with far-right politicians, such as the extremist Itamar Ben Gvir, leading hordes of other extremists in rampages in occupied Jerusalem.

Instead of urging calm and displaying confidence, the country’s own Prime Minister called, on March 30, on ordinary Israelis to arm themselves. “Whoever has a gun license, this is the time to carry it,” he said in a video statement. However, if Israel’s solution to any form of Palestinian resistance was more guns, Palestinians would have been pacified long ago.

To placate angry Israelis, the Israeli military raided the city and refugee camp of Jenin on many occasions, each time leaving several dead and wounded Palestinians behind, including many civilians. They include the child Imad Hashash, 15, killed on August 24 while filming the invasion on his mobile phone. The exact same scenario played out on April 9.

However, it was an exercise in futility, as it was Israeli violence in Jenin throughout the years that led to the armed resistance that continues to emanate from the camp. Palestinians, whether in Jenin or elsewhere, fight back because they are denied basic human rights, have no political horizon, live in extreme poverty, have no true leadership and feel abandoned by the so-called international community.

The Palestinian Authority of Mahmoud Abbas seems to be entirely removed from the masses. Statements by Abbas reflect his detachment from the reality of Israeli violence, military occupation and apartheid throughout Palestine. True to form, Abbas quickly condemned the Tel Aviv attack, as he did the previous ones, making the same reference every time regarding the need to maintain “stability” and to prevent “further deterioration of the situation”,  according to the official Wafa news agency.

What stability is Abbas referring to, when Palestinian suffering has been compounded by growing settler violence, illegal settlement expansion, land theft, and, thanks to recent international events, food insecurity as well?

Israeli officials and media are, once again, conveniently placing the blame largely on Jenin, a tiny stretch of an overpopulated area. By doing so, Israel wants to give the impression that the new phenomenon of Palestinian retaliatory attacks is confined to a single place, one that is adjacent to the Israeli border and can be easily ‘dealt with’.

An Israeli military operation in the camp may serve Bennett’s political agenda, convey a sense of strength, and win back some in his disenchanted political constituency. But it is all a temporary fix. Attacking Jenin now will make no difference in the long run. After all, the camp rose from the ashes of its near-total destruction by the Israeli military in April 2002.

The renewed Palestinian attacks speak of a much wider geography: Naqab, Umm Al Fahm, the West Bank. The seeds of this territorial connectivity are linked to the Israeli war of last May and the subsequent Palestinian rebellion, which erupted in every part of Palestine, including Palestinian communities inside Israel.

Israel’s problem is its insistence on providing short-term military solutions to a long-term problem, itself resulting from these very ‘military solutions’. If Israel continues to subjugate the Palestinian people under the current system of military occupation and deepening apartheid, Palestinians will surely continue to respond until their oppressive reality is changed. No amount of Israeli violence can alter this truth.