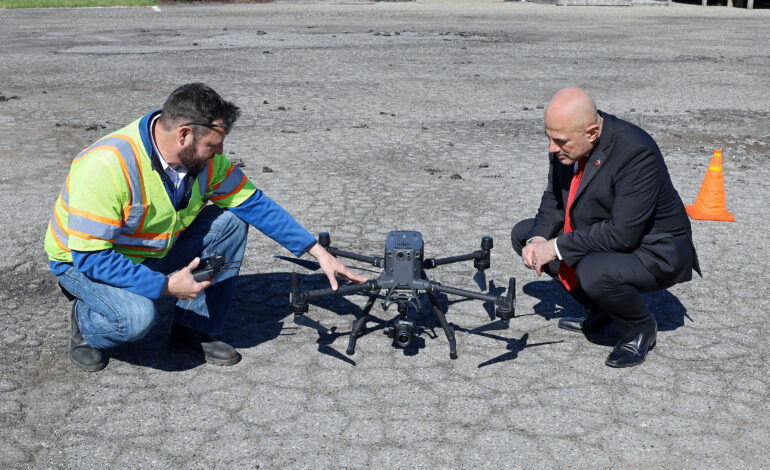 DEARBORN HEIGHTS — In an effort to identify specific problem areas of the Ecorse Creek, the city partnered with Wade Trim to perform an aerial survey of the area.

Wade Trim is the city’s civil engineering contractor and with the city, it recently completed a hi-tech aerial survey of the creek between Inkster Road and the Southfield Freeway using a drone.

The purpose of the survey was to try to capture a profile and take crucial measurements of the creek and the surrounding shorelines. Information gained from the survey will be used to help identify specific problem areas in order to help correct issues that contribute to the restriction of water flow, including restricted or clogged storm outlets, and identify significant blockages like downed trees, logs, brush and debris.

“This is one of the first concrete steps toward providing ‘boots on the ground’ solution to this ongoing problem,” Mayor Bill Bazzi said. “In spite of the many studies and meetings that have taken place in the past, I’m glad to say we are at the point where we can see definitive steps toward actually addressing the problem. This survey will give us a detailed look at exactly where the bottlenecks exist, so we can go after these problem areas efficiently. We are working on additional plans to help reduce the threat of flooding as well, but this first step is the one we really need to get started on the actual work.” Aerial view of the grounds near the Ecorse Creek near Inkster Road as it begins its survey. The drone performed its flyover/survey of the creek between Inkster Road and the Southfield Freeway. Photo: City of Dearborn Heights

The survey was executed by Jason Yoscovits, a Wade Trim engineer and FAA certified drone pilot. The survey consists of a series of still photos “stitched” together, as opposed to traditional video footage, which allows a far more accurate, efficient and comprehensive analysis; and it collected not only creek channel data, but will also cover surrounding areas to a distance of 125 feet from creek’s centerline in each direction.

Data collection will include Real-time Kinematic (RTK), geo-rectified imagery to produce photogrammetric reconstruction of the hard surfaces of the entire run of the creek in the city, which is a detailed engineering quality survey that can later be utilized to show precise areas of concern and target efforts where they can produce the most benefit.

The drone technique provides a precise aerial survey containing geo-located measurements and land contours, where in the past, a team of several engineering staff would be required to walk the entire creek with bulky equipment.

The fly-over was completed in one day with one pilot, as opposed to requiring a minimum of several days and several staff members to complete.

As an aeronautical engineer by education and profession, Bazzi was impressed.

“The technology behind this equipment and its implementation is impressive,” he said. “It is providing us with a far more accurate assessment of the condition of the creek — and the specifics regarding the problem areas we need to focus on — in a way that is far less labor-intensive than the older, traditional methods, and far less costly. This was a great step forward. We still have a lot of work ahead of us, but, finally, we are getting down to the actual work.”

Deadline to register to participate in Memorial Day Parade extended