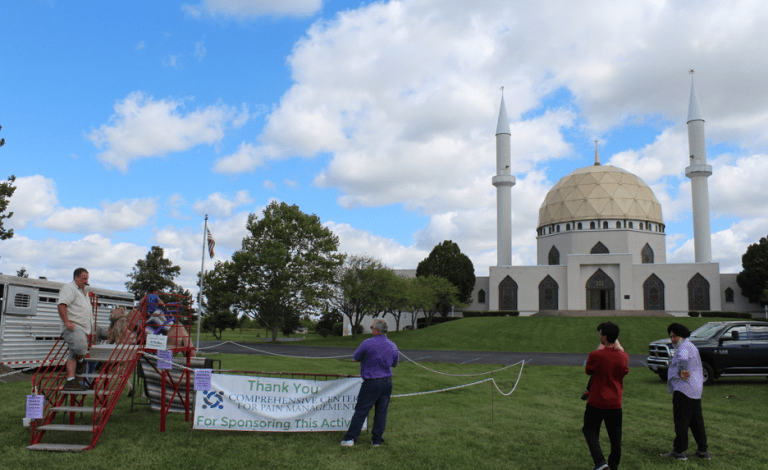 The Islamic Center of Greater Toledo (ICGT) in Perrysburg, Ohio

April is Arab American Heritage Month, which is particularly special in Toledo, where a vital Arab-American community has contributed to the city’s rich history for more than a century.

Samir Abu Absi, a professor emeritus at the University of Toledo, said some of the first Arab immigrants came to north Toledo to an area known as Little Syria back in the 1880s.

“As far as we know the first Arab American that came to Toledo went by the name of Michael Nasser. And he settled in the north end and he had a dry goods store,” Abu Absi said.

Toledo is known for its vibrant Arab American community, but that did not happen overnight.

Most of the immigrants who decided to come to Toledo were young men willing to put in hard work to build a new life in America.

“They were ready to work hard and they did,” Abu Absi said. “They also carried backpacks and they traveled on foot selling whatever it was they had to offer; and once they made some money, they opened their own store.” A still from the documentary “The Last of Little Syria”, based in Toledo, Ohio. Photo courtesy: The Toledo Blade

Toledo is known for its vibrant Arab American community, but that did not happen overnight.

Soon after, they would start families and have a stable life in the U.S., and they would not look back.

“They really didn’t want to go back and be looked upon as failures, so they stayed,” Abu Absi said.

With big hopes to start new generations of Arab Americans, these first few men who decided to settle in the north end had a major impact on the community. Their impact has been felt ever since they came to the States, as some of the members of the Arab American community became Toledo icons.

For Arab Americans in Toledo, they hope that this month will shed a light on Arab American culture and change how they are portrayed.

At the University of Toledo, Arab American students said they are proud of their Arab heritage. For them, this month is so much more than recognizing a culture.

“Newborns here that are first gens or second gens need to actually connect back to their heritage and where they came from” said senior Najwa Nassif.

For freshman Mary Massouh, a month-long reflection on the contributions of Arab Americans is an opportunity to take pride in her heritage.

“It showcases who we are,” Massouh said. “I was born and raised in America, but I am a first-generation college student. I take pride in who I am.”

– This article appeared first at www.wtol.com. It has been edited for style.