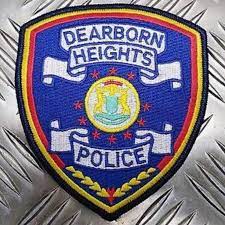 At approximately 6:31 a.m. on April 25, a Dearborn Heights police officer was patrolling the 8600 block of Evangeline Street, just south of Joy Road, when the officer noticed a suspect vehicle which was involved in previous separate flee and elude incidents in Dearborn Heights and Centerline.

The preliminary investigation revealed that the officers were initially unaware that the vehicle was occupied due to significant window tint on the vehicle.

Officers were speaking with a family member nearby when they noticed movement inside the vehicle and the engine started. The driver reportedly revved the engine and drove toward one officer, who subsequently fired two shots from his duty weapon.

The driver then fled the area to a relative’s home in Detroit, where he was located and arrested by Dearborn Heights police. Upon his arrest, the suspect refused medical treatment for the grazing gunshot wound.

While the Michigan State Police are handling the investigation, Dearborn Heights Police Chief Jerrod Hart said that he feels the officers did what they could.

“Based on the information I have at this time, I feel the officers did all they could to mitigate the vehicle from fleeing them,” he told The Arab American News. “I can’t expound on this due to the ongoing investigation.”

Hart also said no officers were injured in the incident.

“I am pleased to report that physically, our police officers are OK and uninjured,” he said. “We are in the process of scheduling a debriefing with a mental health professional, which will provide coping mechanisms for the various emotions they are experiencing. These critical incidents happen in seconds, but can cause underlying stress for years to come.”

As the incident stemmed from an attempt to flee, Hart said it’s important for the department to not only address residents’ concerns, but also be an entity for support.

“This incident stemmed from an all too common occurrence playing out in several communities, including Dearborn Heights — people fleeing from police,” he said. “We are working tirelessly to address residents’ concerns regarding reckless and careless drivers in our community, which pose a public safety threat to other motorists, pedestrians and bicyclists. Almost weekly, drivers choose to flee from police officers who attempt to stop them for traffic offenses. Other motorists engage in poor driving to ‘bait’ police officers into pursuing them, which is troubling. We try to balance the need for enforcement action with creating more of a hazard by engaging in a police pursuit, which is inherently dangerous for staff and the public.”

“In regards to violent crime in our community, officers have handled 148 non-aggravated and 53 aggravated assaults, and 64 reports of stalking since Jan. 1, 2022,” he said. “This is our number one crime category for Part A and B crimes. The majority of these incidents involve persons who know each other (domestic violence), are under the influence of drugs and/or alcohol or those in a mental health crisis. Recently, we met with community partners at the non-profit ACCESS, a behavioral health agency in Dearborn. They recently provided resources to all shifts and our investigators regarding resources they can provide community members. We also have staff attending a Problem Oriented Policing Conference sponsored by Arizona State University this week in Ann Arbor. Our goal is to train staff to engage community stakeholders and other bureaus within the police department to solve quality of life and crime issues.”

More information on ACCESS and its community efforts or resources can be found at www.accesscommunity.org.