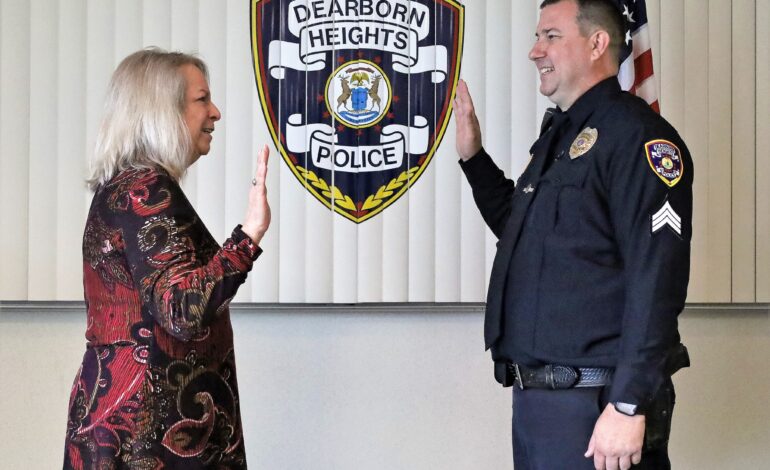 DEARBORN HEIGHTS — Dearborn Heights Police Officer Christopher Suggs has been promoted to police sergeant after eight years with the department.

Suggs, an officer with the Dearborn Heights Police Department since 2014, was originally studying mechanical engineering during his first two years of college.

“I started studying and reading some crime books and I became interested in helping people in that capacity,” he told The Arab American News. “It feels good to be promoted as I’ve worked several different jobs throughout my career.”

Dearborn Heights Police Chief Jerrod Hart said that he is proud of the promotion and that Suggs deserves it.

“I am very proud of Sergeant Suggs’ career as a Dearborn Heights Police Officer,” he said. “He joined our team in 2014 after an honorable 14 year career at the Wayne County Sheriff’s Office.

“In my short tenure, Sgt. Suggs has demonstrated professionalism in his duties by treating everyone with dignity and respect, which is very important to me. He also enjoys cooking for his shift at the end of their 36 hour weekend, which builds esprit de corps. It was an honor to meet his family and see how proud they are of their son, brother-in-law, husband and father. I look forward to Sgt. Suggs’ leadership journey and plan to support him in whatever manner I can.”

Mayor Bill Bazzi said he, too, is proud of the growth and looks forward to what’s to come.

“I want to congratulate Sgt. Suggs on a well deserved promotion,” he said. “I look forward to the development under his leadership and continued success in his career.”

Suggs said that, to him, his responsibilities aren’t changing much.

“I’ll be responsible for leading the shift and continuing to service citizens in the community,” he said. “I am hoping to be someone our officers can look up to. I grew up in Dearborn Heights and I am devoted to improving the quality of life for all residents and visitors.”

Huntington Bank partners with The Arab American News to give $75,000 in scholarships to Dearborn, DBH students