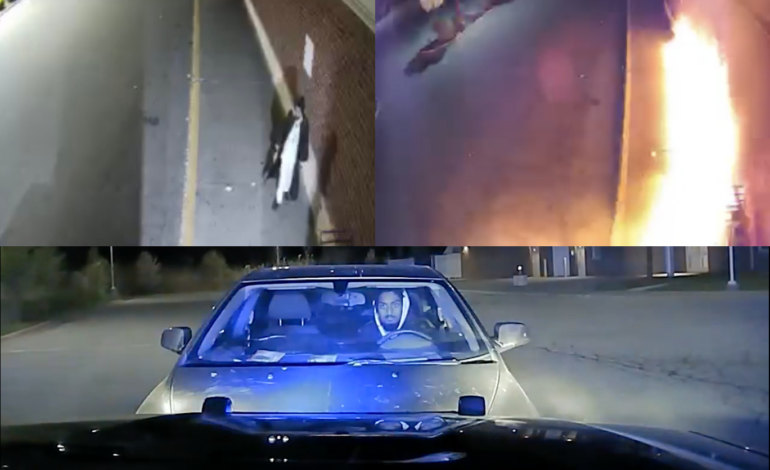 A cash bond was set for $100,000. This was the second arson attempt on the popular supermarket in one weekend, with an earlier one occurring early Saturday morning. Marcus Flowers, 28, of Detroit, is arraigned in front of Judge Gene Hunt at the 19th District Court in Dearborn. Photo: The Arab American News

Security footage from the Dearborn Fresh Supermarket on Sunday morning showed a man wearing a long black hooded coat dowsing the side of the building with a flammable liquid, setting it on fire and fleeing from the scene.

This was the second arson attempt on the building last weekend. The popular market, located at Michigan Avenue and Schaefer Road, underwent a vicious arson attack on its property early Saturday morning.

That fire, quickly extinguished by Dearborn firefighters and the building’s suppression system, had caused some damage to the facility. But that damage was limited and the supermarket was open to serve its customers shortly afterwards. The market’s owners offered a $50,000 reward for anyone with a tip that would have led to the arrest and conviction of the perpetrators.

Then, on early Sunday morning, surveillance footage obtained by The Arab American News showed a hooded person setting fire to the building and then running around the corner away from the camera’s sight. Soon after, a truck speeds towards the person’s location, followed by another car.

Dearborn Police, who were in the area, made an arrest.

The Arab American News’ earlier report said police were “informed by security guards on site who saw the fleeing car.” The store’s owners have since clarified that a security guard and the night officer on patrol, who knew each other, were actually chatting when both saw the fire being set and chased after the person. Footage from Dearborn Fresh Sunday morning shows a person douse a side of the building with a flammable liquid then set it on fire. Photo: Screengrab

On Tuesday, Dearborn Police Chief Issa Shahin said the suspect Dearborn officers apprehended “has a significant record of mental health challenges” and that based on the preliminary investigation and interviews with the person, police have no reason to believe the motive behind the fire was political or ideological.

Shahin did not identify Flowers as the suspect or comment on whether the suspect was alone involved in both Saturday’s and Sunday’s fires.

On its Facebook page the Dearborn Police Department  also showed dashcam and body cam footage of the arrest. Dashcam footage from a Dearborn Police officer’s vehicle show him and a black truck, believed to be store security, turn the corner and chase after a grey Buick.

The chase continues down Michigan Avenue and into residential east Dearborn streets. At one point, the car turns around and rams straight into the officer’s vehicle, giving a clear view of Flowers’ face, along with the black hood seen in the surveillance footage. After a further chase, the officer is finally able to ram and stop the suspect’s car at a dead end street, after which the person exits the vehicle and is chased on foot by officers.

Body cam footage shows the person on the ground being handcuffed in a residential backyard.

Dearborn Fresh’s owners told The Arab American News on Sunday that the market was open shortly after the second attack and was “ready to serve our loyal customers.”