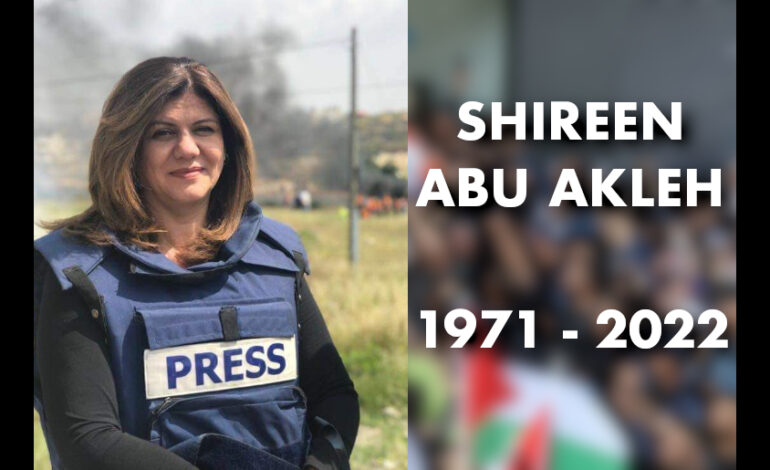 Shireen Abu Akleh: The "voice of Palestine’" was gunned down by an Israeli sniper

On Wednesday morning, in the occupied Palestinian city of Jenin, Israeli occupation forces assassinated Palestinian journalist Shireen Abu Akleh. Since 1997, Shireen has been the face of Palestine for Al-Jazeera, the world’s most-watched Arabic-language media outlet.

Early that morning, she donned her press vest and helmet to once again cover the everyday horrors of Palestinian life under the brutal Israeli occupation. As she and her colleagues assembled to cover an Israeli raid in the Jenin refugee camp, Israeli military snipers opened fire on their entourage, wounding producer Ali Al-Smoudi and murdering Shireen, according to eyewitness testimony from three journalists on the scene.

As if on cue, Israeli Prime Minister Naftali Bennett immediately started telling the world that she was likely shot by Palestinians. The eyewitness accounts directly refuted this, however. According to them, there were no Palestinians in the area, only Israeli occupation forces.

Shireen told the truth about Palestine for more than 20 years. On Wednesday morning, Israel decided that she had said enough.

Shireen was a Palestinian daughter of Jerusalem and Bethlehem. She was a voice for the voiceless, an example to all. On social media, Palestinian women have recounted how they grew up idolizing her, mimicking her iconic signoff. She told the truth about Palestine for more than 20 years. On Wednesday morning, Israel decided that she had said enough.

To be clear, Shireen was not simply executed by a single bullet precisely delivered by a single sniper. She was executed by a racist apartheid movement built on the notion that Palestinians are foreigners in their own land. Zionism is based on the belief that Palestinians don’t deserve life. Further, that sniper’s elite training was paid for by American taxpayers, as was the bullet that murdered Shireen.

The Biden administration and numerous American politicians are unquestionably complicit in the murder of Shireen, as well as all Israeli atrocities.

The Biden administration and numerous American politicians are unquestionably complicit in the murder of Shireen, as well as all Israeli atrocities. Biden has stayed quiet on Israeli violations, silently encouraging the Zionist state as it continues to displace Palestinians and steal Palestinian land. In the 2020 campaign, Biden promised to re-open the American Consulate in Jerusalem, the office that served Palestinians, closed by the Trump administration. He has yet to take steps to fulfill that pledge. In fact, he hasn’t reversed any of the horrific pro-Israel policies put forward by the Trump administration, including recognition of Israeli sovereignty over the Syrian Golan Heights.

In Michigan, Governor Whitmer has cozied up to Israel through economic relationships. In February, Whitmer joyfully announced that an Israeli company, Electreon, would be contracted to help accelerate the deployment of electric vehicle infrastructure in Detroit. Are there no Michigan or American companies that could take this contract? After Russia’s invasion of Ukraine, Whitmer ordered the state to divest from any investments in Russian firms. Meanwhile, she continues to support a Michigan law that prohibits the state of Michigan from contracting from any individuals or companies that support the Boycott, Divestment and Sanctions Campaign (BDS) against Israel. In other words, according to Governor Whitmer, boycotting Russia is a moral endeavor, while boycotting Israel is punishable, not even accorded the minimum of First Amendment protection.

We cannot stay silent in the face of Israel’s attack on journalists who are only seeking to do their job in bringing the truth to the world.

We cannot stay silent in the face of Israel’s attack on journalists who are only seeking to do their job in bringing the truth to the world. Shireen Abu Akleh was a Palestinian icon and the Israeli military assassinated her in cold blood. Such a heinous act cannot pass without civil and political action. We must make it clear that Shireen’s memory, and the memory of every Palestinian martyr before her, will continue to live on, no matter how many bullets fall on our Palestinian brothers and sisters.

On Sunday, May 15, we urge all people who support human rights to join us in a rally and march to commemorate the Nakba (“Catastrophe”) of 1948, when close to 800,000 Palestinians were ethnically cleansed by Israel to help create its state. The event will take place at 3 p.m. at the Ford Community and Performing Arts Center at 15801 Michigan Ave, Dearborn, MI 48126. Shireen Abu Akleh: A trailblazer who gave voice to Palestinians