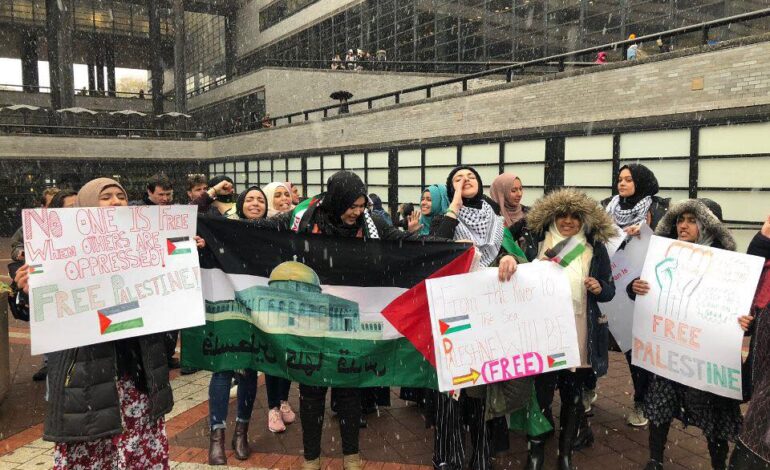 Students gather at a protest organized by Students for Justice in Palestine at City College of New York (CUNY) in 2018. Photo courtesy: SJP-CUNY

NEW YORK – Law school faculty at a major university in New York has joined the ranks of educational and professional organizations supporting the Boycott Divestment and Sanctions (BDS) and recognition of Palestinian rights.

The global BDS campaign seeks to dismantle Israel’s violent occupation of Palestinian lands, while working to protect the rights of all Palestinians and demanding the full right of return of Palestinian refugees as dictated by international law. The movement and its proponents often call on companies, institutions and governments around the world to change policies that bolster the structures of occupation and apartheid.

The resolution calls for a boycott of Israeli apartheid government and Israeli companies that take advantage of and support Israel’s illegal occupation of Palestine, thereby systematically ending long standing relationships between major U.S. colleges like CUNY and those occupation entities.

In doing so, the resolution calls out CUNY’s complicity “in the ongoing apartheid, genocide, and war crimes perpetrated by the state of Israel against the Palestinian people through its investments in and contracts with companies profiting off of Israeli war crimes.”

Endorsement of this resolution – also supported by anti-Zionist Palestinian, Muslim, Arab, and Jewish students, faculty, staff – is no small feat, and comes about in an environment of repression of the Palestinian voice and political cause on campus. The resolution calls out CUNY’s complicity “in the ongoing apartheid, genocide, and war crimes perpetrated by the state of Israel against the Palestinian people through its investments in and contracts with companies profiting off of Israeli war crimes.”

CUNY Law faculty says that earlier last week, the John Jay College administration decided to effectively cancel the Palestine Lives 2022 conference, scheduled to take place on Saturday, May 14th, under the pretext that there is not enough “security”. Last month, Chancellor at CUNY Félix V. Matos Rodríguez went on a “Scholars as Bridge Builders” trip to Israel along with 10 college presidents but did not visit a single Palestinian university.

The resolution notes that “CUNY has a history of censoring, repressing, harassing, and surveilling Palestine solidarity activists, including current CUNY Law students and co-sponsors of this resolution.”

It also observes Israel’s settler colonialism and structural racism has parallels across the world, “including in the United States, to disenfranchise, dispossess, and inflict violence upon specific groups of people for the benefit of others.”

The resolution outlines lucrative deals between the university and weapons and security and companies profiting off of war and ethnic cleansing in Palestine, such as Raytheon. It also talks of tuition-free training for NYPD officers, a department which runs a training exchange program with Israel’s occupation forces.

CUNY Law has contracts with surveillance companies, like BioCatch, whose founder Avi Turgeman served as head of innovation for the cyber-intelligence unit of the Israel’s occupation forces.

The calls to hold Israel accountable for its internationally-recognized human rights violations have intensified in the wake of last week’s targeted assassination of Palestinian American journalist Shireen Abu Akleh in occupied West Bank.

The Al Jazeera reporter was covering an Israeli forces raid in the Palestinian refugee city of Jenin, when she was shot, with fellow journalists on the ground reporting only Israeli forces presence in the area. Close to 50 Palestinian reporters have been killed covering Israeli actions in occupied Palestinian lands since 2002, with no investigation or indictments against its forces by Israel.

Israeli companies and governmental bodies also maintain relationships with local officials, like Governor Whitmer in Michigan, who supports a state law that prohibits the state of Michigan from contracting from any individuals or companies that support BDS.

State officials routinely take trips to meet with occupation security agencies and to bring Israeli business contracts back home. An Israeli company, Electreon, has been contracted to help accelerate the deployment of electric vehicle infrastructure in Detroit, for example.

“We applaud CUNY School of Law’s faculty for supporting student organizing efforts to fight for Palestinian self-determination and against our institution’s complicity that funds and supports Palestinian genocide,” said Rachel Pincus, Executive Board Member of JLSA.

Organizers of the resolution at CUNY also issued a fact sheet, for those unfamiliar with the BDS movement and Israel’s historic mistreatment of Palestinians.

As for those wondering if BDS is anti-Semitic, the resolution writers say it is not inherently antisemitic to critique and even oppose Israel: “Not all Jewish people are Zionists, and not all Zionists are Jewish. Although Israel falsely purports to speak for all Jewish people, Zionism and Judaism are not the same thing.”

Free and reduced-cost high speed Internet available to many: Here’s what to know