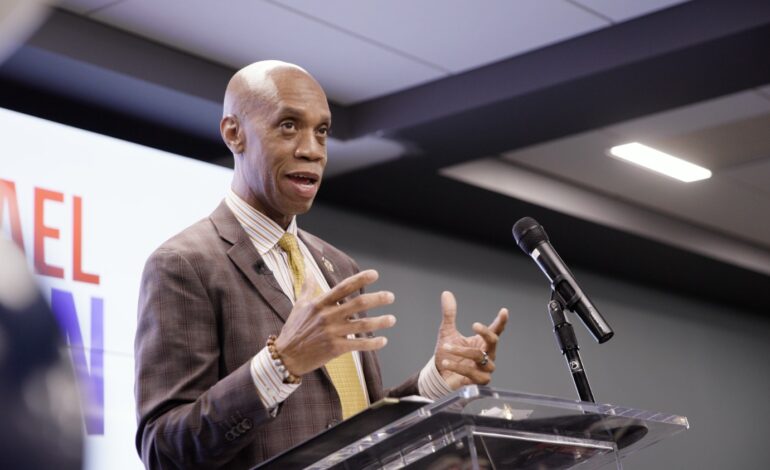 DETROIT/DEARBORN — Wayne County Sheriff Raphael “Ray” Washington received major endorsements at a rally on Tuesday, as he runs to retain his position in this August’s primary election.

The endorsement rally took place at the Union Carpenters and Millwrights Skilled Training Center on the city’s west side, a 147,000 square foot, state-of-the-art training facility for local union carpenters. A fitting venue for the display of support from major local unions and public officials.

The campaign’s theme for the event was “We Are Stronger Together.” Sheriff Washington at the rally that took place at the Union Carpenters and Millwrights Skilled Training Center on Detroit’s west side. Photo: Mohamad Mawla

“I am humbled to stand with you today,” Washington said. “We have people from all backgrounds – all races, creeds and colors; young and the young at heart; from across the county, standing together in unity for a better future. That’s what this campaign is all about – standing stronger together.” Wayne County Sheriff Raphael Washington speaks at the fundraising event. To his left is Undersheriff Mike Jaafar and to his right is Wayne County Deputy Director of Homeland Security Sam Jaafar, in Dearborn, Wednesday, May 18. File photo

Washington is standing for election this August to finish out the remainder of the four-year term, till the end of 2024, and is competing against Democrats Walter Epps of Plymouth and Joan Merriewether of Detroit. Elections filings show Washington resides in Livonia.

Livonia Mayor Maureen Brosnan and Westland Mayor Bill Wild were also at the event in support of Washington.

A 39-year veteran of both the Detroit Police Department and the County Sheriff’s Office, Washington has vowed to “bring people together and finish the job his predecessor started,” his campaign said. Washington wants to create a new jail facility “complete with new programs to help those incarcerated, filling all of the vacant positions at the jail, building upon the Sheriff’s Community Outreach Urban Team and keeping the staff, visitors and jail population free from COVID-19,” said the campaign.