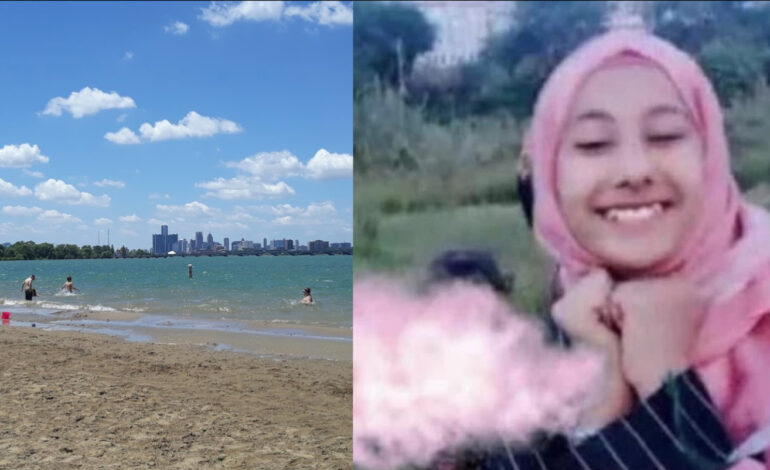 DEARBORN — The 16-year-old sister of 12-year-old Ghadir Saleh, who was tragically killed on Belle Isle on Monday from a hit-and-run crash, was in critical condition and required surgery, as of Wednesday evening.

A member of the girl’s family told The Arab American News that she had been responsive, but had been undergoing careful monitoring by doctors.

The Michigan State Police, which is investigating the incident, told The Arab American News that her earlier status as stable had been downgraded to critical this afternoon.

The girls suffered injuries when a car drove off Riverbank Drive and onto a busy beach where the Saleh family was enjoying Memorial Day. Ghadir tragically died from those injuries. 12-year-old Ghadir Saleh was killed when she and her sister were hit by a car that drove off of a road onto a busy beach on Belle Isle in Detroit, on Monday, May 30

Horrifying footage from the incident quickly spread widely on social media and WhatsApp groups in the local Arab American community.

Local community Facebook groups say Ghadir had immigrated to the U.S. from Yemen only three months ago. The sisters are Lowrey Middle School students in Dearborn. A vigil for the Ghadir is planned in Dearborn for Friday.

A service was planned for Thursday and will see officials from the Dearborn Public Schools, who issued letters of condolences to the school community. Lowrey School Principal Dr. Rima Younes was with the family at the hospital following the crash. Here’s the information we have received from the police:

UPDATE: We are continuing to investigate this incident and working with the prosecutors office. We are looking for anyone who was on the beach and did not speak to a trooper on the night of the crash to call MSP or 800 SPEAK UP. 9/ pic.twitter.com/5PREOxP488