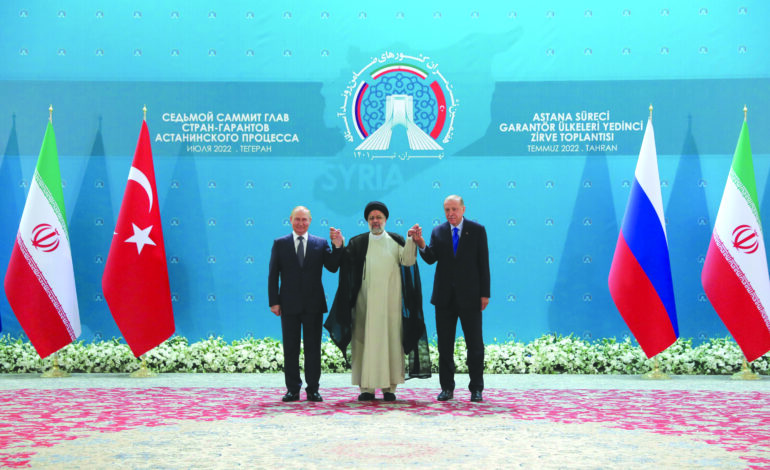 Russian President Vladimir Putin ended his first major summit outside Russia since the invasion of Ukraine with an endorsement from Iran for its response to NATO, a clash with Turkey over Syria and signs of progress over the lifting of the Russian blockade of Ukrainian grain.

The White House said the Tehran summit held between Putin, the Iranian president, Ebrahim Raisi, and the Turkish president, Recep Tayyip Erdoğan, showed how isolated the Russian leader had become – which was not an observation shared by Moscow, which claimed it showed Russia remained respected in the Middle East.

In a day of intense diplomacy involving bilateral talks followed by a trilateral summit about Syria, Putin praised the Turkish leader for mediating talks on the export of grain from Ukraine, saying there had been some progress.

Russia’s military intervention in Ukraine has hampered shipments from one of the world’s biggest exporters of wheat and other grain, sparking fears of global food shortages.

In a bid to broker a deal that will see the Russian navy lift the blockade of ports such as Odesa, the EU agreed to unfreeze economic resources owned by seven top Russian lenders, as long as it could be shown the resources are necessary for the purchase, import or transport of agricultural and food products, including wheat and fertilizers.

Since the 1936 Montreux Convention, Turkey, a NATO member, has responsibility for naval traffic entering the Black Sea.

Putin’s meeting with Erdoğan was his first meeting with a head of government of a NATO member and his trip to Tehran was his second outside Russia since the invasion of Ukraine.

Erdoğan has been leading the efforts to broker a deal whereby grain can leave the ports so long as the ships are independently inspected for armaments. More than 25m tons of grain that is urgently needed in Africa and the Middle East is currently being held in silos.

Putin won the endorsement of the Iranian supreme leader, Ayatollah Ali Khamenei, for the invasion of Ukraine.

Khamenei told Putin, “War is a harsh and difficult issue, and Iran is not at all pleased that ordinary people suffer from it, but in the case of Ukraine if you had not taken the initiative, the other side would have caused the war with its own initiative.

“If the road is open to NATO, it knows no boundaries and if it was not stopped in Ukraine they would start the same war some time later under the pretext of Crimea.”

He said Russia and Iran needed to work together gradually to reduce the power of the dollar.

Putin echoed Iran’s judgment that he had no choice but to invade, saying, “No one is in favor of war, and the loss of ordinary people’s lives is a great tragedy, but the behavior of the West made us have no choice but to react. Some European countries said ‘We were against Ukraine’s membership in NATO, but we agreed under American pressure’, which shows their lack of independence.”

Russia and Iran also agreed to sign a long-term memorandum of understanding to cooperate over $40bn (£33bn) worth of oil contracts.

However, the atmosphere of cordial consensus that Russia and Iran displayed was not shared by Erdoğan when it came to his ambitions to intervene in northern Syria.

The Turkish president, potentially exploiting Putin’s distractions in Ukraine, has been preparing a fresh military incursion into northern Syria in a bid to construct a buffer zone 30km south of the Turkish-Syrian border.

He claims the buffer zone would shield Turkey from attacks by Syrian Kurds led by the U.S.-backed YPG militia, as well as provide space for the voluntary return of as many as 1 million Syrian refugees from inside Turkey. The return of the refugees would help Erdoğan’s currently ailing chances of re-election next year.

But Khamenei expressed his broad objections to a fresh Turkish incursion, saying this would definitely be to the detriment of Syria, Turkey and the region.

Erdoğan, speaking at the start of the trilateral meeting, appeared to assert his unilateral right to mount an invasion, saying it was “not possible to expect Turkey to sit idle and aloof from this problem.” He claimed a 30km barrier was necessary to deal with the hotbeds of terrorism in northern Syria.

Turkey regards the YPG as indistinguishable from the Turkish Kurdish terrorist groups.

Erdoğan’s next moves will turn on whether he believes he is being given a private green light by Iran and Moscow that they will not intervene to prevent his planned buffer zone.

Russia appears to be working with the Syrian government of President Bashar al-Assad to create a Syrian military presence in the border region with the tacit support of the YPG.

Putin and Saudi Crown Prince Mohammed bin Salman spoke by phone on Thursday and underlined the importance of further cooperation within the OPEC+ group of oil producers, the Kremlin said.

The conversation took place six days after President Biden visited the prince in Saudi Arabia — highlighting the kingdom’s importance to both Washington and Moscow at a time when Russia’s war in Ukraine is roiling global energy markets.

On June 2, OPEC+, which brings together the Organization of the Petroleum Exporting Countries with other producers led by Russia, agreed to a larger-than-expected rise in output, a step welcomed by Biden after the United States had called for more supply.

Sources told Reuters that Saudi Arabia consulted closely with Russia before pushing for the production hikes.

Riyadh wants to keep Russia on board to increase leverage in the oil market, while Moscow gains from being part of OPEC+ at a time when the West is trying to strangle its economy with sanctions over the war.

Biden ended his Middle East trip last week without any announcement that the kingdom would raise oil production to bring down fuel prices, which are spurring the highest U.S. inflation in four decades.

Saudi Foreign Minister Prince Faisal bin Farhan Al Saud said oil was not discussed at a U.S.-Arab summit on Saturday, and OPEC+ would continue to assess market conditions and do what is necessary. The producer group is due to meet again on Aug. 3.

– Sources: The Guardian and Reuters. Edited for style.

In Syria, a poor wheat harvest adds to food worries

How much extra oil can Saudi Arabia pump?