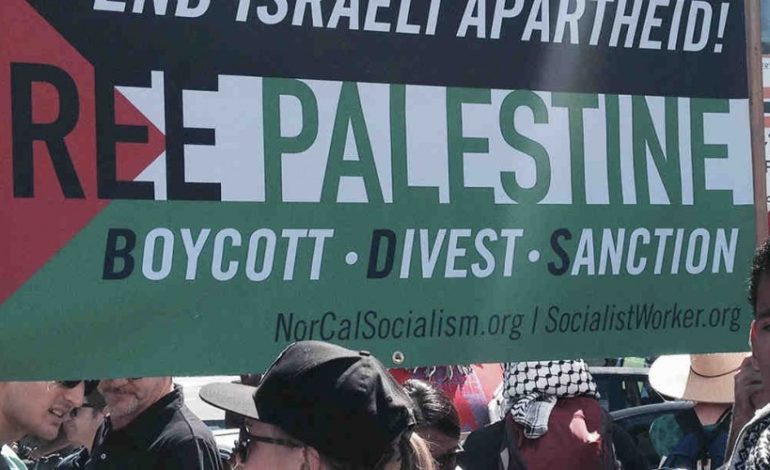 — This article by Hamzah Khan, legal intern at the the Council on American-Islamic Relations’ New Jersey Chapter, was first published by the New Jersey Record and USA TODAY Network. It has been edited for style

In a world where there are hundreds of companies manufacturing and selling the same product, the freedom to choose a brand is, under ordinary circumstances, basic. But in New Jersey, legislators have taken that right away.

For years, the New Jersey State Legislature has wielded undue influence over political discourse regarding Boycott, Divestment and Sanctions (BDS), a grassroots movement launched by Palestinian civil society to pressure Israel to comply with international law. In 2016, the General Assembly approved an anti-boycott law, after it passed unanimously in the state Senate, requiring the state to divest its pension funds from any company involved in a boycott of the state of Israel.

Critics at the time warned of the violations to free speech that this posed for New Jersey residents, but then-Governor Chris Christie nevertheless signed it into action.

Six years later, this law has been used multiple times to punish companies that choose to boycott Israel due to humanitarian concerns, with Unilever being one of the most recent cases. After a two-year campaign by multiple advocacy groups, Unilever’s subsidiary, Ben & Jerry’s, announced last year that it would no longer sell its ice cream in the illegally Occupied Palestinian Territories, including Israeli settlements in the West Bank, saying that it is inconsistent with the company’s values to have their ice cream sold in Occupied Palestine.

In 2018, the same anti-BDS law was also used against Danske Bank, the largest bank in Denmark, which held around $44 million of New Jersey’s state pension fund. The Danish bank refused to do business with two Israeli military contractors, Elbit Systems and Aryt Industries, because of their operations in Israeli settlements, which violated the company’s social policies.

Danske Bank stated that they were not boycotting Israel as a whole, but only those two companies. As was the case with Unilever, even though Danske Bank argued that it was not boycotting the state of Israel, the generality of the New Jersey anti-boycott law still allowed the state to punish them.

The state of New Jersey is employing a glaringly obvious double standard when it engages in sanctions against Iran and Russia on the grounds of human rights abuses, yet continues to support Israel despite reputable human rights organizations… finding the country guilty of crimes against humanity.

New Jersey is one of more than 30 states that passed anti-BDS laws. Defenders of these laws say that they are meant to stop anti-Semitism, but advocacy groups, including the Anne Frank House, differentiate between criticisms of the Israeli government and anti-Semitism, with the former being political and human rights-focused and the latter being condemnable.

Others have warned that conflating the two — criticisms of Israel and anti-Semitism — is an encroachment on free speech and an attempt to stifle political debate and advocacy for Palestinian human rights. In adopting an anti-boycott law, New Jersey is blatantly attempting to flag any criticism of Israel as unacceptable, even if it goes against the U.S. government’s own classification of the Occupied Palestinian Territories.

The New Jersey State Legislature should do more to stop actual anti-Semitic hate crimes rather than target a non-violent grassroots political movement aiming to pressure a foreign government to end its human rights abuses. The reality is that these laws prohibit criticisms of Israeli government policies. In an ironic turn of events, New Jerseyans can criticize their own government, but not the Israeli government.

Boycotts have been instrumental in human rights campaigns both within the U.S. and around the world. Boycotts played a prominent role in ending segregation in the U.S. during the Civil Rights Movement and were even protected by the U.S. Supreme Court. Supporters of the BDS movement, which was started by Palestinian activists, note that it is modeled after the boycott movements against South Africa, which helped end the apartheid regime in that country.

The state of New Jersey is employing a glaringly obvious double standard when it engages in sanctions against Iran and Russia on the grounds of human rights abuses, yet continues to support Israel despite reputable human rights organizations, including Amnesty International and Human Rights Watch, finding the country guilty of crimes against humanity. The state recently invested $20 million in Israel bonds as an “affirmation” of the state’s confidence in the State of Israel and its economy, Governor Murphy said at the time.

At the end of the day, the right to boycott is essential to free speech, and the state’s hypocrisy only serves to strengthen human rights abusers abroad while diminishing freedoms at home.