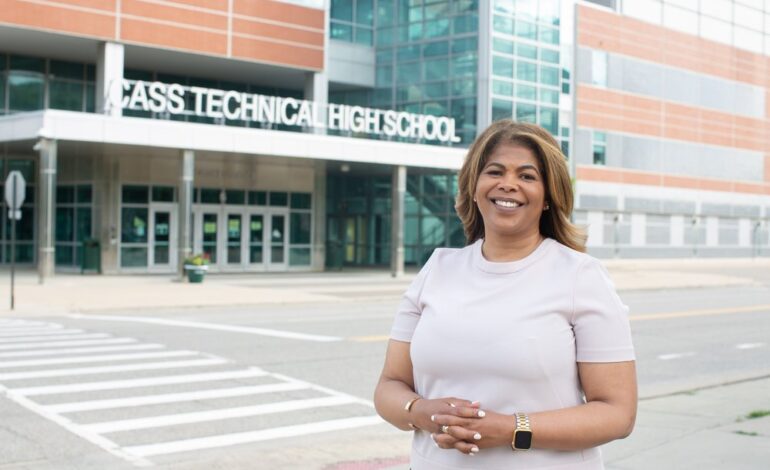 DETROIT — Portia Roberson is a candidate in the August 2 primary election in the newly-drawn U.S. House District 13, covering much of Detroit and Hamtramck, as well as Downriver and western Wayne communities and eastern cities like Grosse Pointe.

The district also includes the southern portion of Dearborn Heights. Besides Hamtramck, the district includes dispersed Arab American concentrations surrounding Dearborn, which wholly sits in the newly drawn District 12, and in Wayne County cities like Melvindale and Taylor.

Roberson, a product of  the Detroit Public Schools and a University of Michigan and Wayne State grad, is up against some stiff competition in a heavily crowded field of candidates: John Conyers III, Adam Hollier, Shri Thanedar, Sherry Gay-Dagnogo, Michael Griffie, Sharon McPhail, Sam Riddle and Lorrie Rutledge are all running as Democrats. Martell D. Bivings is the only Republican on the ballot.

According to a recent Target Insyght’s poll, Roberson is just behind the self-funded millionaire Thanedar, ahead of Hollier in a race with 16 percent of voters undecided, despite no outside spending on her behalf.

“These results indicate what we’ve known all along, that Portia Roberson is the strongest candidate in this race,” Roberson’s campaign manager Kara Turrentine said in a statement. “It’s time to rally behind her candidacy to ensure the 13th is represented by a lifelong Detroiter and an African American woman with a track record of fighting for people’s basic rights.”

Roberson currently serves as the president and CEO of a large non-profit that provides workforce training, a food for seniors program and early learning/Head Start for southeast Michigan. She was once an appointee of former President Obama.

Though this is her first such run at an elected office, she has seen support from Hamtramck officials as well as two of the area’s Arab American PACs.

Roberson responded to the following questions from The Arab American News by email.

Q) As your campaign interacts with residents of the newly-drawn 13th District, what are some of the most pressing issues expressed by working families in the area? If elected, what is your vision for addressing those issues?

As we travel through the district from Detroit, to Romulus to the Grosse Pointes, there are a few challenges that every community is concerned about. The rising cost of living and affordability is a challenge that is top of mind for every working family. We must continue to leverage solutions that provide relief for those who need it the most.

The erosion of basic rights, including voting rights, the reversal of Roe v. Wade and the need for a criminal justice system that treats everyone fairly are all common themes I hear from voters.

Gun violence also touches every community. It is simply unacceptable to allow the proliferation of military-grade weapons in our community or any community. In Congress, I will champion banning assault weapons, support universal background checks and work with any fellow members of Congress that prioritize protecting children and keeping guns out of the wrong hands.

Q) What has been the response to your platform among voters in ethnic concentrations of the district, particularly Arab American communities in Hamtramck, eastern Detroit neighborhoods and the Downriver area?

The response from the Arab American Community across the district has been inspiring. Our campaign is resonating with leaders in Hamtramck, Downriver and in Arab enclaves in the eastern neighborhoods of Detroit. I’ve received endorsements from Hamtramck Mayor Pro Tem Mohammed Hassan, Hamtramck Council member Mohammed Alsomiri and Hamtramck Council member Amanda Jaczkowski, in addition to many other leaders from across the 13th Congressional District. We also have the support of the Arab American PAC and the Yemeni American PAC.

One of the biggest issues I hear about is the need for bilingual services. One of my goals is to open a service center in Hamtramck that will be able to help individuals that need bilingual support with various services. I am committed to helping address this direct need to create a welcoming community in the 13th district.

Q) A long history of serious pollution in several areas of the district have created serious public health concerns for residents living near industrial zones, oil refineries or the Rouge complex. Further, frequent and devastating flooding in the region has been linked to climate change. How can you, as a member of the U.S. Congress, affect real change for working families seeking environmental justice?

Clean water, clean air and habitable lands are human rights that shouldn’t be partisan issues. For too long, American corporations have treated poor and marginalized communities in the 13th Congressional District as waste dumps for pollutants that pose a threat to both the environment and human health.

I believe in empowering the EPA to develop screening and mapping tools to ensure racial and socioeconomic equity in federal climate, energy and infrastructure programs and identify areas of high cumulative pollution that threaten residents’ health and safety.

In addition, I will partner with local leaders to stop corporate environmental negligence and endorse those local leaders also have a voice in the fight against climate change.