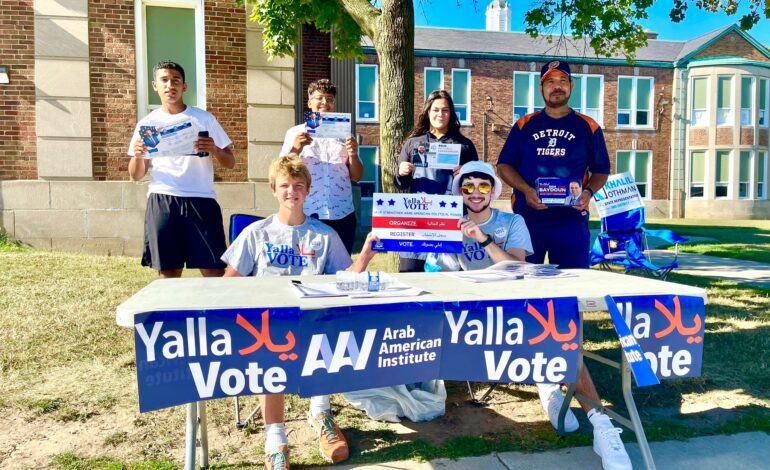 Arab American neighborhoods in Dearborn, Dearborn Heights and Hamtramck have some important choice to make about representations in the federal, state and county governments today.

The primary election was off to a predictably slow start, with the city clerk in Hamtramck reporting only some 800 of the 1,300 or so absentee ballots sent out had returned by Election Day. Hamtramck has 13,913 registered voters. In person voting was gradual by noon.

Dearborn precincts gave similar reports. The city has some 72,000 registered voters. AV counts were about 7,500 out 14,000 ballots sent out by around noon. The Arab American News reporter Hussein Alkadhim visited several precincts in the dense Arab American neighborhoods of the eastern and northeastern portion of the city, where precincts showed only double digits by early afternoon.

Southernmost precincts in the area of Salina Intermediate school reported 75 and 116 Election Day votes cast by around 3 p.m.

Dearborn Heights had a similar slow start, with around 570 returned AV ballots by Election Day morning.

Neighborhoods in Dearborn and Dearborn Heights are now split between three different State House seats thanks to redistricting. The change dilutes Arab American representation in the Detroit-heavy District 4, which includes all of Dearborn’s northeast neighborhoods. Both cities fall under one State Senate and Congressional district.

Three Arab American candidates are competing on the Democratic ballot for the District 3 State Rep seat, raising concerns over a split Arab vote, though this is by no means a guarantee. That District also includes parts of western Dearborn, which has historically contained Whiter, more affluent voters.

The rest of west Dearborn is contained in a State House District 15, which also includes Dearborn Heights.

Find out your exact voting location by visiting the Michigan Voter Information Center at Michigan.gov/Vote. Below is a handy map for Dearborn voters to locate their precinct number, and which State House district they live in. Areas in pink are District 4, yellow District 3 and light green District 15. For the first time in the cities’ histories, Dearborn and Hamtramck voters can exercise their right to vote with ballots translated into Arabic. Note, candidate names appear in English on the ballots as per requirements from the secretary of state.

What to know about voting

The Muslim voter engagement organization Emgage created a handy Election Day voting guide, sourced from secretary of state guidelines, with best practices to makes sure ballots are cast accurately and on time before polls close:

Voters with absent voter ballots at their homes should bring them to their local election clerk’s office or drop box before 8 p.m. today. Voters should not place them in the mail at this point, as they may not arrive by 8 p.m. and would therefore not be counted. Voters can find their clerk’s location and contact information here. A list of ballot drop boxes here.

Registered voters without an absent voter ballot may vote at their local polling place. Polls open at 7 a.m. and all voters who arrive by 8 p.m., even if there is a line, will be allowed to vote. To ensure polling places and clerk offices are safe for all voters and election workers, the Michigan Bureau of Elections has provided every election jurisdiction with masks, gloves and cleaning supplies as well as protocols for hygiene and social distancing. All election workers will wear masks and voters are strongly encouraged to do so. Michigan citizens who have not yet registered are still able to do so at their election clerk’s office until 8 p.m today. They will be able to vote in person in the same visit. They can find their local clerk’s address and contact information at Michigan.gov/Vote.