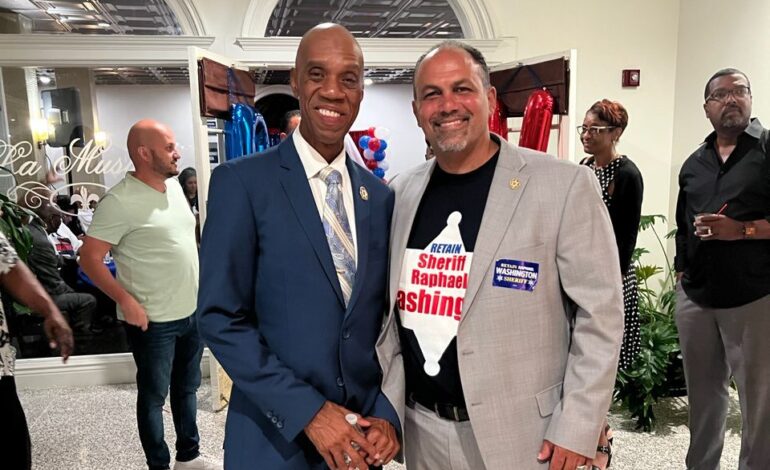 Turnout in Wayne County for Tuesday’s primary election was only 21 percent.

Supporters and volunteers from diverse communities in Wayne County gathered to watch the results slowly trickle in at an Election Night watch party  at the Hotel Saint Regis in Detroit Tuesday night.

By around 11:30 p.m., only Dearborn and Westland had confirmed a victory for Washington.

During the watch party, as everyone awaited results, Washington thanked the room and specifically acknowledged the work of his undersheriff, who mobilized the local Arab American community in support of Washington. My undersheriff and the whole Dearborn and Dearborn Heights community… they came through. — Wayne County Sheriff Raphael Washington

“My undersheriff and the whole Dearborn and Dearborn Heights community — give them a hand, please — they came through,” Washington said.

He also expressed his appreciation for the campaign his team led.

“We had a journey that was honorable,” he said.

He will be bringing his team, including Undersheriff Mike Jaafar, with him into his new term.

“Sheriff Washington’s teams are all over this county and are very active and attuned to the community’s needs, and I believe the results showed this,” Jaafar told The Arab American News regarding Washington’s win. “I also believe that the opposition deciding to speak negatively backfired against them as we saw this election, they came in last place. You insult people’s intelligence with nasty politics, people are much smarter than that.” Washington was appointed sheriff after his predecessor, Benny Napoleon, died in 2020. Washington and Undersheriff Jaafar came up in the Detroit Police Department.

In his campaign platform, Washington said he strives to provide and support Wayne County communities while also believing that “law enforcement leaders must be discerning in their decision-making, yet compassionate when meting out decisions that affect personnel, the inmate population and the public.”

The Wayne County Sheriff’s Office recently launched a satellite station in Dearborn, housed within the state-of-the-art MetroTech Automotive Group building on Michigan Avenue. The satellite station strives to give the local community further access to law enforcement and work in cooperation with local agencies.