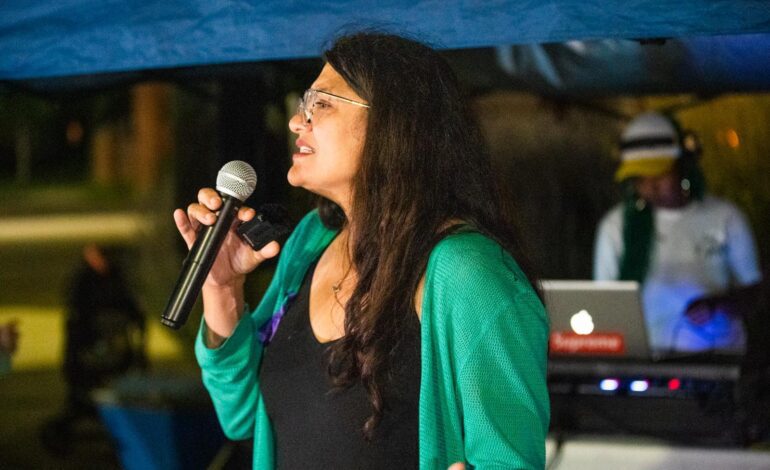 DETROIT — Residents in Dearborn, Southfield, Livonia, Detroit and more are now closer to being represented by a storied member of the so-called “Squad” in the U.S House.

With the results of Tuesday’s primary election trickling in slowly throughout the night, District 12 candidate Rashida Tlaib, the incumbent in the race, cemented an early and wide lead over her opponents, prompting a celebration at a campaign watch party on Detroit’s northwest side.

Just before midnight, precincts showed Tlaib at almost 60 percent of the vote, with Detroit City Clerk Janice Winfrey trailing behind at 23 percent. Lathrup Village Mayor Kelly Garret was at 11 percent and former State Rep. Shanelle Jackson had only managed about 6 percent of the vote.

Tlaib spoke to a jubilant and diverse crowd of supporters and volunteers on Grand River Avenue by the North Rosedale Park neighborhood on Tuesday night.

“Thank you, thank you so much for everything,” Tlaib told teary-eyed volunteers standing around her. “I love you all so much. I told you guys, we can’t just win, we gotta win big.”

The watch party sat in the newly-drawn District 12, which also contains Dearborn and Dearborn Heights, giving the Palestinian American congresswoman a chance at representing an even larger Arab American constituency.

The slow trickle of results was expected, given that Michigan’s political maps, on three legislative levels, had been completely reorganized, forcing incumbents to choose to stay in their current cities or move and take a shot at a new neighboring district.

Redistricting also created new boundaries for congressional and state legislative races for county and city clerk offices to reckon with before the election.

By early Wednesday, clerks issued unofficial finals, showing the sheer popularity of the twice elected incumbent Tlaib, who also vastly out-raised her competition by millions of dollars. Outside, pro-corporate and pro-Israeli apartheid sources poured money into the House race, buying ads for Winfrey and creating a PAC that attacked Tlaib’s record, positioning Winfrey as Tlaib’s main competitor in the Democratic primary.

The push was not simply the result of support from the new district’s Arab community. For example, Tlaib received some 55 percent of the vote in Oakland County, areas new to the congresswoman closely associated with Detroit.

Detroit itself came out heavily for Tlaib over her competition, with Tlaib receiving 16,940 votes over Winfrey’s 9,210.

Of course, Tlaib, a Detroit native whose mother now resides in Dearborn, saw strong results in Dearborn. Almost 76 percent of the vote went to Tlaib, compared to Winfrey’s 13 percent.

Much of Tlaib’s work representing her current District 13 revolved around direct constituent services, tackling public health issues brought on by major industrial pollution in the southern Detroit area, fighting water shutoffs and more. But the new district also encompasses parts of southern Wayne County and its working class neighborhoods, and Tlaib told The Arab American News last week that those goals of standing up to corporate interests and “having her district’s back” will remain the same.

Corporate funding, much of it dark, may have helped defeat Tlaib’s progressive colleague and longtime U.S. House member Andy Levin, who lost out to Haley Stevens in the newly drawn District 11 on Tuesday night. Stevens received campaign support from the right wing Israeli lobby AIPAC. Our neighbors made it clear: No one should be able to come into our communities and tell us how to think or vote. Our democracy is ours. – U.S. Rep. Rashida Tlaib (D-Detroit)

Both Tlaib and Levin hosted Vermont Senator Bernie Sanders in Pontiac over the weekend to address the influence of pro-corporate PAC funds in the election.

Tlaib’s campaign said on Wednesday that it knocked on nearly 30,000 doors and made over 120,000 phone calls to voters. It also hosted events in “every corner of the district,” meeting voters new and old to listen to their concerns.

“We pushed back against attacks from an out-of-state PAC funded by a Wall Street billionaire and dark money mailers,” Tlaib said in a statement. “Our neighbors made it clear: No one should be able to come into our communities and tell us how to think or vote. Our democracy is ours. Yesterday, we showed folks that $1 million in attack ads can’t even come close to stopping our growing movement.