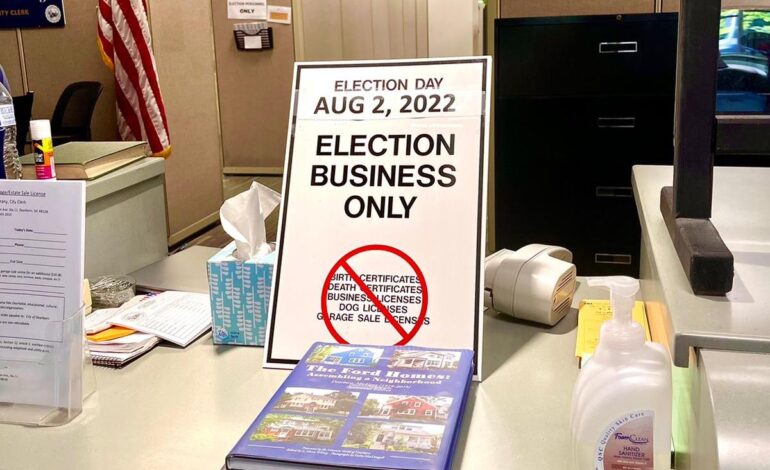 DEARBORN – Despite the abundance of electoral benefits for Dearborn and Dearborn Heights residents during the primaries held on Tuesday, polling stations in both cities witnessed a noticeable low voter turnout, compared to the last midterm primary election four years ago.

While the turnout for the primary election in 2018 reached 35 percent, the voter turnout on Tuesday did not exceed 20 percent in the city of Dearborn, which has a population that exceeds 108,000 people, taking into account the increase in the number of registered voters in recent years.

According to primary results published on the Dearborn Clerk’s Office website, 6,687 voters cast absentee ballots, in addition to 7,848 people who voted in attendance on Election Day.

The polling station at Duval School in West Dearborn witnessed the highest turnout, with 512 voters, including 283 who voted on Election Day, out of a total number of 1,529 registered voters, bringing the turnout in the aforementioned poll center to 34.38 percent. The lowest voter turnout was at the Oakman School in East Dearborn, where the turnout was 7.41 percent, with 112 voters casting their votes out of a total of 1,511 registered voters.

Dearborn Heights was not better off, as the voter turnout was only 17.76 percent, with 4,438 absentee voters and 3,673 voters on Election Day.

The Arab American News reporters toured some polling stations throughout the city of Dearborn during Election Day and monitored the slight presence of volunteers in the electoral campaigns of some Arab American candidates in local and national races who complained about the low voter turnout at the polling stations despite the importance of the races with Arab American candidates, especially those for seats in the Michigan House of Representatives and the U.S. House of Representatives.

The Michigan Independent Citizens Redistricting Commission had distributed Dearborn and Dearborn Heights into three State House districts, which increased the possibility of bringing three lawmakers to the Michigan Legislature to represent those cities, which was previously represented by one State House representative and which is currently represented by State Rep. Jeffrey Pepper, succeeding former representative and current Dearborn Mayor Abdullah Hammoud.

One of the campaign volunteers for Michigan House of Representatives candidate Gus (Ghassan) Tarraf attributed the voters’ reluctance to vote to the fact that many residents travel for summer vacations inside and outside the U.S. during the months of July and August.

Activist Walid Fidama, who volunteered in the campaign to re-elect Wayne County Commissioner Sam Baydoun to his District 13 seat, which includes Dearborn and Allan Park, explained that amending Michigan’s electoral laws and allowing absentee voting without any justification contributed to raising absentee voting rates and reducing turnout at polling stations.

“Only in my family, six people voted absentee, to avoid going to the polling stations on Election Day,” Fidama said, expressing his belief that the coming years will witness an increase in absentee voting rates.

Dearborn was one of the first cities in Michigan, along with Hamtramck, to offer voters an Arabic ballot, after the unanimous passage of an ordinance by the Dearborn City Council to translate all election materials to Arabic in order to increase the participation of non-English speakers in choosing their representatives in government and official positions.