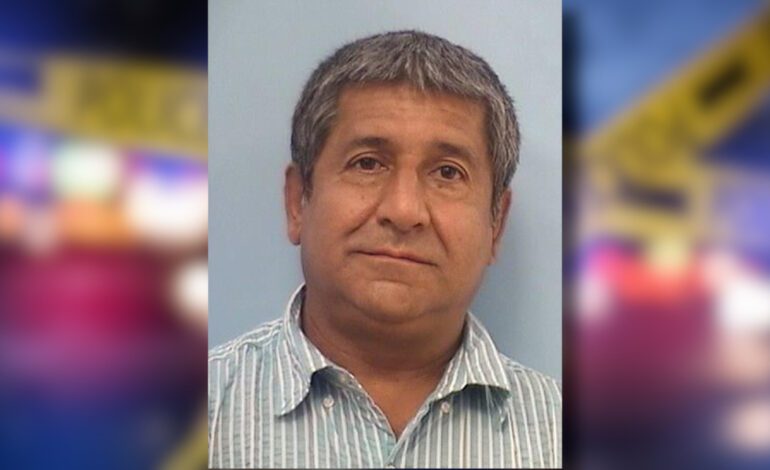 Muhammad Syed, 51, was taken into custody Monday, Aug. 8, in connection with the killings of four Muslim men in Albuquerque, New Mexico, over the last nine months. He faces charges in two of the deaths and may be charged in the others. Photo: Albuquerque Police Department via AP

NEW MEXICO — After the shooting deaths of four Muslim men in Albuquerque in what authorities suspected to be related cases over nine months, police said they had a suspect in custody and announced charges on Wednesday in two of the shootings.

Muhammad Syed, 51, was taken into custody a day earlier after a traffic stop more than 100 miles away.

Syed, who is from Afghanistan and is himself Muslim, is charged with two of the slayings and has been identified as a prime suspect in the other killings.

Police have said it is not clear yet whether the deaths should be classified as hate crimes or serial killings.

Investigators received hundreds of tips from the city’s Muslim community that pointed toward Syed, who has lived in the U.S. for about five years, and knew the victims.

Police were looking into possible motives, including an unspecified “interpersonal conflict.”

When asked specifically if Syed, who is Sunni, was angry that his daughter married a Shi’a, Albuquerque Deputy Police Cmdr. Kyle Hartsock did not respond directly. He said on Wednesday “motives are still being explored fully to understand what they are.”

Ahmad Assed, president of the Islamic Center of New Mexico, cautioned against coming to any conclusions about the motivation of the suspect, who he said attended the center’s mosque “from time to time.”

On Thursday, the local Muslim community called for the Afghan refugee to remain behind bars pending trial, citing previous accusations of domestic violence and video surveillance that appeared to show him slashing the tires of a vehicle parked outside the local mosque.

The video from early 2020 had prompted leaders of the Islamic Center at the time to admonish Syed and tell him not to return to the mosque.

The woman whose tires were slashed never went to the police and charges were never filed, Assed said.

But nearly two years later, her brother-in-law became one of the victims. Mohammad Zahir Ahmadi was fatally shot last November behind the market he owned with his brother.

I’m incredibly grateful for the hard work of everyone who worked swiftly to help bring justice to the families and victims impacted by these tragic crimes. Meeting some of the family members of the victims today was a bittersweet moment I will never forget. pic.twitter.com/97Wv72SxAI

Syed is charged in the killings of Aftab Hussein and Muhammad Afzaal Hussain because bullet casings found at the crime scenes were linked to a gun found at his home, authorities said.

Investigators consider Syed to be the primary suspect in the deaths of Naeem Hussain and Ahmadi, but have not yet filed charges in those cases.

Syed is scheduled to appear in court next Monday, when a state judge will consider a motion by prosecutors seeking to detain him without bond pending trial. Prosecutors have argued that Syed is dangerous and that no conditions of release will ensure the community’s safety.

Syed denied any connection to the crimes, saying he was heading to Houston to find a new home for his family over fear about the killings.

The exact nature of the relationships between Syed and the victims, and the victims to one another, remains unclear for now. But police said they continue to investigate how they crossed paths before the shootings.

Police said they were about to search Syed’s Albuquerque home on Monday when they saw him drive away in a Volkswagen Jetta that investigators believe was used in at least one of the slayings.

Officers followed him to Santa Rosa, about 110 miles east of Albuquerque, where they pulled him over. Multiple firearms were recovered from his home and car, police said.

Syed’s sons were questioned and released, according to authorities.

Albuquerque is the largest city in New Mexico. Three of the men attended the Islamic Center and a fourth was close with the local community.

“We tracked down the vehicle believed to be involved in a recent murder of a Muslim man in Albuquerque. The driver was detained and he is our primary suspect for the murders,” Albuquerque Police Chief Harold Medina said on Twitter on Tuesday.

On Monday, authorities asked for help searching for the suspected vehicle. Police said the same vehicle was suspected of being used in all four homicides.

Authorities released photos of the car hoping people could help identify it and offered a $20,000 reward for information leading to an arrest. Three of the men involved were killed in ambush style shootings. Naeem Hussain, 25, was killed Friday night. Just days before, Afzaal Hussain, 27, and Hussein, 41, who were from Pakistan and members of the same mosque, were shot dead. Afzaal Hussain had worked as a field organizer for a local Democratic congresswoman’s campaign.

The earliest case involves the November killing of Ahmadi, 62, from Afghanistan.

“We have a very, very strong link,” Albuquerque Mayor Tim Keller said Sunday. “We have a vehicle of interest… We have got to find this vehicle.”

Police determined that bullet casings found in Syed’s vehicle matched the caliber of the weapons believed to have been used in two of the killings and that casings found at the crime scenes were linked to guns found at Syed’s home and in his vehicle.

Footage from body-worn cameras from the arrest includes an 18-second clip of Syed face-down on the ground as officers tell him to put his hands behind his back. He appears to tell them he does not speak English as they put him in handcuffs. In another clip, he is shown walking from the back of a police cruiser into the department’s headquarters. He wore a striped long-sleeved shirt, dark pants and sandals.

When interviewed by detectives, Syed said he had fought against the Taliban, according to a criminal complaint filed in court Tuesday.

He lived in an apartment in Albuquerque with family members who told reporters that he was a truck driver, but hadn’t worked for a company in a long time.

Court documents show the domestic violence allegations Syed was accused of involved separate altercations with his wife, a son and his future son-in-law. The cases were dismissed because the victims declined to press charges.

The most recent victim was found dead after police received a call of a shooting. Authorities declined to say whether the killing was carried out in a way similar to the other deaths.

The killings sent shockwaves of alarm through local Muslim communities in New Mexico and the rest of the nation, with President Biden joining in the chorus of concern and need for a thorough apprehension of those involved in the violence. News reports of Muslim communities in New Mexico and beyond indicated people were avoiding going out unless “absolutely necessary.” Some Muslim university students had wondered whether it was safe for them to stay in Albuquerque. The center has also beefed up its security.

The Council on American-Islamic Relations (CAIR), the nation’s largest Muslim civil rights and advocacy organization, welcomed the arrest of the suspect condemned the “anti-Shi’a hatred that may have motivated the killings.”

CAIR also offered a $10,000 reward for information leading to the arrest and conviction of anyone responsible for the murders and called on the Biden administration to take a direct role in responding to the shooting spree.

“Although we are waiting to learn more about these crimes, we are disturbed by early indications that the alleged killer may have been targeting particular members of the Shi’a community,” CAIR National Executive Director Nihad Awad said on Tuesday. “If this is true, it is completely unacceptable, and we encourage law enforcement to file any appropriate hate crime charges against the suspect.”

On Wednesday, CAIR brought together Muslim groups in D.C. to condemn the killings and dispel any hint of conflict in the U.S. Islamic community.

“Like Protestants and Catholics, the Sunni and Shia communities in this country live near each other, work with each other and marry each other in peace,” said Edward Ahmed Mitchell, CAIR deputy director. “There is no significant history of violence at all in the U.S. between Shi’as and Sunnis.”

In a call with community leaders, including Assed, on Wednesday, FBI and DHS officials, including representatives of the New Mexican Attorney General’s office, assured the public that authorities do not have any indication that the Muslim community in the county remains under threat after the arrest of Syed. They also declined to give more details on the shootings, but said Syed appears to have been driven by a complex mix of motives.

— Wire and staff. Edited for style.