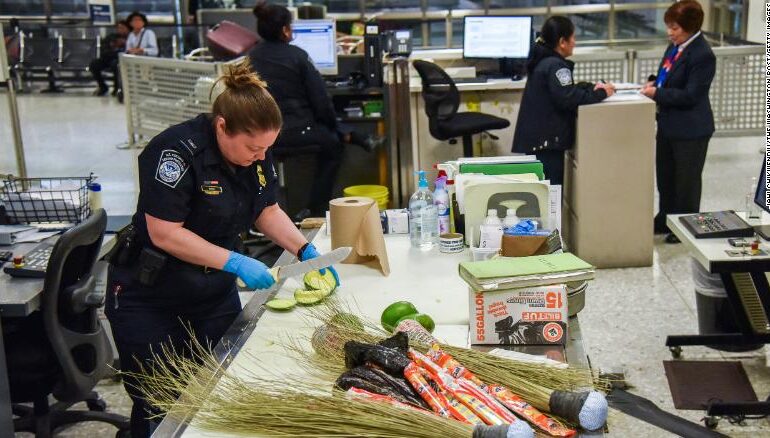 A U.S. Customs and Border Protection agriculture specialist examines mangoes for signs of weevils. The fruits were found in luggage at Dulles International Airport in Virginia. Photo courtesy: The Washington Post

United States border officials have a message for travelers who bring food items from overseas: Violations will cost you.

In the past year alone, U.S. border officials have fined passengers for bringing a wide range of undeclared food items in their luggage, including balut eggs, pork bologna and turkey ham. Border officials conducted “630,150 positive passenger inspections” in 2021, according to statistics for the fiscal year released by the U.S. Customs and Border Protection, and issued thousands of penalties and violations to travelers who failed to declare prohibited agriculture items.

CBP officials at George Bush Intercontinental Airport in Houston discovered balut eggs in a passenger’s luggage on March 6. Balut eggs contain a duck embryo and are boiled and eaten from the shell.

Failure to declare food products at U.S. air, sea and land border entry points can lead to fines and penalties of up to $10,000, according to the CBP.

Here’s what you need to know before bringing food products into the U.S.:

Why are some foods not allowed?

Travelers bringing food products into the U.S. can inadvertently introduce foreign pests and food-borne diseases into the country, which can have a devastating effect on agriculture and the environment. And a pest or disease outbreak could impact more than just farmers. It also means higher grocery bills and shortage of some food items for consumers.

Last year, border officials discovered 264 pests at U.S. ports of entry, a slightly higher number than the 250 found the prior year. Pests intercepted last year include a Saunders 1850 butterfly larvae found in pineapples from Costa Rica. The larvae feeds on plants and legumes and is considered an invasive pest mainly found in Amazonian tropical rain forests. Introducing it in the U.S. ecosystem could be detrimental to the agriculture industry, the CBP said.

What food products can you bring?

A long list of food items are allowed into the U.S., including condiments, cooking oils, bread, cookies, crackers, cakes, cereal, packed tea and other baked and processed products. The CBP provides a list of allowed items on its website.

Can you bring in fruits or vegetables?

The short answer is no.

Nearly all fresh and frozen fruits and vegetables are prohibited from entering the U.S. due to risks of pests and diseases — some of which can survive in frigid temperatures, according to the U.S. Department of Agriculture. Even the fruits and vegetable snacks provided on an airplane or cruise ship should be left behind, says Lucero Hernandez of the federal Animal and Plant Health Inspection Service.

Travelers crossing a land border into the United States from Canada can bring some fresh fruits and vegetables — as long as they were grown in Canada. But they need proof that the produce is free of soil, pests and diseases, and that it was grown in Canada, not just sold there, the USDA says.

And in all cases, travelers coming to the U.S. should save receipts and original packaging to prove food products’ country of origin, according to the CBP.

What happens if you bring forbidden items?

Travelers who declare agricultural products in their luggage don’t face penalties — even if an inspector concludes the items are not eligible to enter the country, the USDA says. In such cases, the food is destroyed.

“An apple or snack that can mistakenly be brought won’t always make a significant incident,” the CBP spokesperson explained of an unintentional failure to declare a food item. “However, attempting to bring in prohibited items would lead to traveler delays and may result in a fine.”

“Failure to declare a prohibited food item may result in the issuance of a civil penalty,” the spokesperson added.