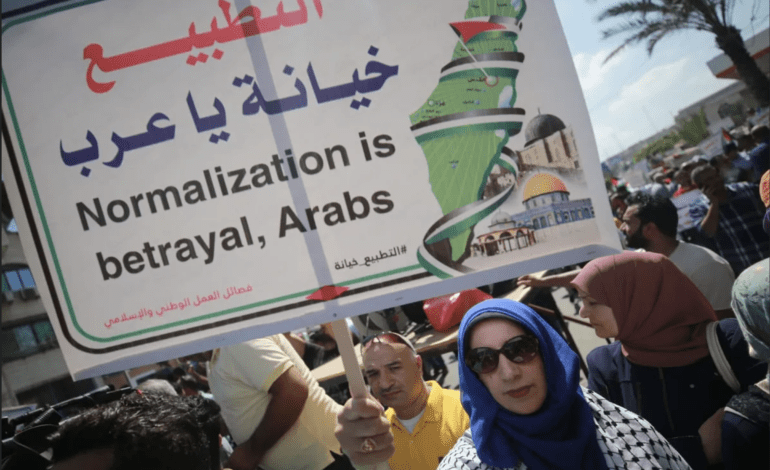 Palestinian gather to protest a deal between the United Arab Emirates (UAE) and Israel to normalize ties, in Gaza City, Gaza on 19 August 2020. Photo: Anadolu Agency

It seemed all but a done deal: Israel is finally managing to bend the Arabs to its will, and Palestine is becoming a marginal issue that no longer defines Israel’s relations with Arab countries. Indeed, normalization with Israel is afoot, and the Arabs, so it seems, have been finally tamed.

Not so fast. Many events continue to demonstrate the opposite. Take, for example, the Arab League two-day meeting in Cairo on July 31 – August 1. The meeting was largely dominated by discussions on Palestine and concluded with statements that called on Arab countries to reactivate the Arab boycott of Israel, until the latter abides by international law.

The strongest language came from the League’s assistant secretary-general, who called for solidarity with the Palestinian people by boycotting companies that support the Israeli occupation.

The two-day Conference of the Liaison Officers of the Arab Regional Offices on the Boycott of Israel praised the Boycott, Divestment and Sanctions (BDS) movement, which has been under intense Western pressures for its unrelenting advocacy of international action against Israel.

One of the recommendations by Arab officials was to support Arab boycott initiatives in accordance with the Tunis Arab Summit in March 2019, which resolved that “boycott of the Israeli occupation and its colonial regime is one of the effective and legitimate means to resist.”

Though one may rightly cast doubts on the significance of such statements in terms of dissuading Israel from its ongoing colonization schemes in Palestine, at least, it demonstrates that in terms of political discourse, the collective Arab position remains unchanged. This was also expressed clearly to U.S. President Biden during his latest visit to the Middle East. Biden may have expected to leave the region with major Arab concession to Israel — which would be considered a significant political victory for the pro-Israel members of his Democratic Party prior to the defining November midterm elections — but he received none.

What American officials do not understand is that Palestine is a deeply rooted emotional, cultural and spiritual issue for Arabs — and Muslims. Neither Biden, nor Donald Trump and Jared Kushner before him, could easily — or possibly — alter that.

Indeed, anyone who is familiar with the history of the centrality of Palestine in the Arab discourse understands that Palestine is not a mere political question that is governed by opportunism and immediate political or geopolitical interests. Modern Arab history is a testament to the fact that no matter how great U.S.-Western-Israeli pressures and however weak or divided the Arabs are, Palestine will continue to reign supreme as the cause of all Arabs. Political platitudes aside, the Palestinian struggle for freedom remains a recurring theme in Arab poetry, art, sports, religion and culture in all its manifestations.

This is not an opinion, but a demonstrable fact. The latest Arab Center Washington D.C. (ACW) public opinion poll examined the views of 28,288 Arabs in 13 different countries. The majority of the 350 million Arabs continue to hold the same view as previous generations of Arabs did: Palestine is an Arab cause and Israel is the main threat.

The Arab Opinion Index (AOI) of late 2020 is not the first of its kind. In fact, it is the seventh such study to be conducted since 2011. The trend remains stable. All the U.S.-Israeli plots — and bribes — to sideline Palestine and the Palestinians have failed and, despite purported diplomatic ‘successes’, they will continue to fail.

According to the poll: The vast majority of Arabs — 81 percent — oppose U.S. policy towards Palestine; 89 percent and 81 percent believe that Israel and the U.S. respectively are “the largest threat” to their individual countries’ national security. Particularly important, the majority of Arab respondents insist that the “Palestinian cause concerns all Arabs and not simply the Palestinians.” This includes 89 percent of Saudis and 88 percent of Qataris.

Arabs may disagree on many issues, and they do. They might stand at opposite sides of regional and international conflicts, and they do. They might even go to war against one another and, sadly, they often do. But Palestine remains the exception. Historically, it has been the Arabs’ most compelling case for unity. When governments forget that, and they often do, the Arab streets constantly remind them of why Palestine is not for sale and is not a subject for self-serving compromises.

For Arabs, Palestine is also a personal and intimate subject. Numerous Arab households have framed photos of Arab martyrs who were killed by Israel during previous wars or were killed fighting for Palestine. This means that no amount of normalization or even outright recognition of Israel by an Arab country can wash away Israel’s sordid past or menacing image in the eyes of ordinary Arabs.

A most telling example of this is how Egyptians and Jordanians answered the AOI question “Would you support or oppose diplomatic recognition of Israel by your country?” The interesting thing about this question is that both Cairo and Amman already recognized Israel and have diplomatic ties with Tel Aviv since 1979 and 1994, respectively. Still, to this day, 93 percent of Jordanians and 85 percent of Egyptians still oppose that recognition as if it never took place.

The argument that Arab public opinion carries no weight in non-democratic societies neglects the fact that every form of government is predicated on some form of legitimacy, if not through a direct vote, it is through other means. Considering the degree of involvement the cause of Palestine carries in every aspect of Arab societies — on the street, in the mosque and church, in universities, sports, civil society organizations and much more — disowning Palestine would be a major delegitimizing factor and a risky political move.

American politicians, who are constantly angling for quick political victories on behalf of Israel in the Middle East, do not understand or simply do not care that marginalizing Palestine and incorporating Israel into the Arab body politic is not simply unethical, but also a major destabilizing factor in an already unstable region.

If you’re planning to travel to the U.S. with food items from overseas, read this