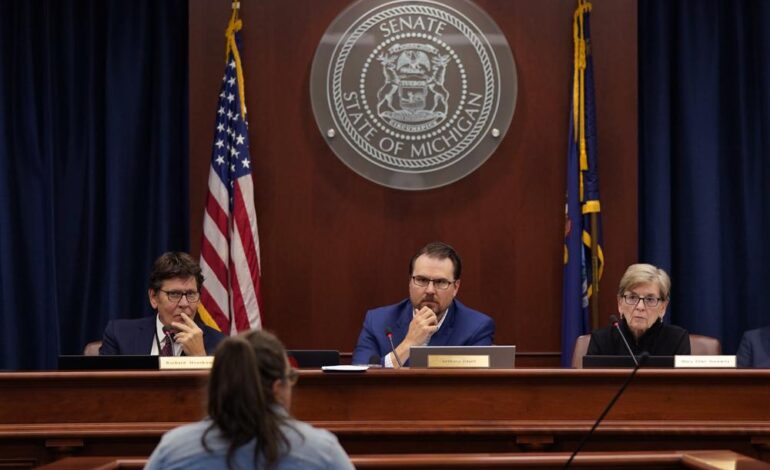 Richard Houskamp, left, Anthony Daunt and Mary Ellen Gurewitz, members of the Michigan Board of State Canvassers, listen to a speaker during a hearing, Wednesday, Aug. 31, in Lansing. Photo: Carlos Osorio/AP

LANSING — A Michigan elections board rejected an abortion rights initiative on Wednesday after its two Republican board members voted against putting the proposed constitutional amendment on the November ballot.

The two Democrats on the Board of State Canvassers voted in favor, but getting the measure on the ballot required at least three votes from the four-member board. The Reproductive Freedom for All campaign, which gathered signatures to get the measure on the ballot, is expected to appeal to the Democratic-leaning Michigan Supreme Court in the coming days and expressed confidence it would prevail.

The board’s administrative and clerical work on elections was once carried out in obscurity, but it drew national attention in 2020 when Donald Trump pressured Republican members not to certify Joe Biden’s electoral win in the state. Its partisan split was evident on another issue Wednesday, when it deadlocked 2-2 on a measure to expand voting, with Democrats for it and Republicans against.

Abortion rights have become a powerful motivator for voters since Roe was overturned. In conservative Kansas, voters overwhelmingly defeated a ballot measure that would have allowed the Republican-controlled legislature to tighten restrictions or ban the procedure outright. The issue has also swayed voters in special elections for Congress, including in a battleground district in upstate New York. Nationally, Democrats have seen an increase in fundraising since the Supreme Court decision.

The proposed constitutional amendment aims to negate a 91-year-old state law that would ban abortion in all instances except to save the life of the mother. The meeting drew hundreds of people who packed the hearing room and overflow rooms for a chance to comment. Abortion opponents also protested outside.

Michigan’s 1931 law — which abortion opponents had hoped would be triggered by a conservative majority on the U.S. Supreme Court overturning Roe vs. Wade in June— remains blocked after months of court battles. A state judge ruled Aug. 19 that Republican county prosecutors couldn’t enforce the ban, saying it was “in the public’s best interest to let the people of the great state of Michigan decide this matter at the ballot box.”

Darci McConnell, a spokeswoman for Reproductive Freedom for All, the group backing the measure, said she remains confident.

“We had more than 730,000 people who read, signed and understood what they signed,” McConnell said. “The board was supposed to do one thing today and affirm that we had the signatures, their own bureau said we did. So we’re still optimistic that we’ll be on the ballot in November.”

Supporters of the other initiative, to expand voting, including adding ballot drop boxes, also are expected to appeal to the Supreme Court. Groups have seven business days to appeal and the ballot must be finalized by Sept. 9.

Having abortion rights on the ballot in November would almost certainly be a boon for Democrats in Michigan, a swing state where voters will also be deciding whether Democrats keep control of statewide offices, including governor and secretary of state. Governor Whitmer and other Democrats have put abortion rights front and center in their campaigns, and after Republicans chose businesswoman Tudor Dixon as the GOP nominee for governor, Democrats released an ad blasting her strong opposition to abortion, including in cases of rape and incest.

Abortion opponents protested noisily outside as the meeting got underway Wednesday. Their muffled yells could be heard inside the hearing room and the Republican board chairman at one point asked security to tell them to stop banging on the windows.

During the public comment period, Dr. Jessica Frost, an obstetrician and gynecologist in Lansing, told the board “we must restore the reproductive protections lost when Roe was overturned.”

“I can’t imagine a more important decision that you have to ever make in your life, because I know that you and I will kneel before Christ someday and answer for the decision you make today,” Billy Putman said.

The Bureau of Elections verified last Thursday that the abortion ballot initiative petition contained enough valid signatures for the amendment to qualify for the ballot and recommended that the Board of State Canvassers approve the measure.

On Wednesday, Mary Ellen Gurewitz, a Democratic canvasser, said the board had “no authority to reject this petition due to challenges to the content of the petition.” But Tony Daunt, a Republican canvasser, said errors in some petition language were “egregious.”

The Michigan Board of State Canvassers, comprising two Republicans and two Democrats, has become increasingly partisan in recent years.

Trump’s pressure in 2020 led one member, who has since resigned, to abstain from certifying Biden’s win. The other GOP board member, who voted to certify, wasn’t nominated again by the state Republican Party and was replaced by Daunt, the board chairman.

Earlier this year, two leading candidates for the GOP nomination for governor were dropped from the primary ballot after the board deadlocked along partisan lines on whether too many fraudulent signatures on their nomination papers made them ineligible. A tie vote meant the candidates lost.