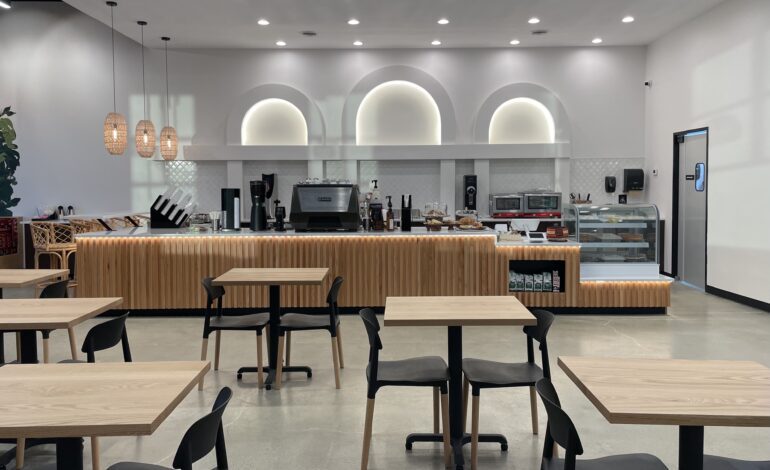 DEARBORN — Yemeni coffee is taking over the cafe scene in Metro Detroit by storm, and a major contributor to that world is Qamaria Coffee. The premium Yemeni coffee bean sourcing, roasting operation and cafe franchise is opening its fifth location at the border of Dearborn and Dearborn Heights.

Started by two Yemeni entrepreneurs with a passion for coffee, Qamaria already has four cafe locations in Michigan and a roasting operation on Dix Avenue in south Dearborn.

The franchise opened an Allen Park cafe in July and has plans to open another location in Grand Blanc this year, as well as more locations in Illinois and Texas.

The new location promises to offer all the popular Yemeni coffee and tea beverages and traditional Yemeni desserts that people — from local Arab communities and beyond — know and love.

Qamaria Coffee said in a press release that the new location’s uniquely designed interior features an elegant and bright space that pays homage to the coffee farmers and artisans of Yemen.

“We took our time to refine the brand and align it with our long-term goals before entering the Dearborn/Dearborn Heights market because we knew the bar was high in such a competitive environment,” said Qamaria Co-Founder Munif Maweri. “That paid off — we couldn’t be prouder of the Dearborn team; this new location exceeded expectations and brings us much closer towards our growth goals.”

Historians trace the harvest of coffee beans to countries surrounding Yemen, but most agree that it was Yemenites who first brewed it to drink, as it was viewed as a stimulant by Sufi monks. It’s now enjoyed in a wide variety of brew methods around the world. Qamaria’s founders Maweri and Hatem Aleidaroos began their journey as coffee wholesalers, working directly with the Yemeni farmers to harvest specialty beans and export them to the U.S.

Though single-origin Yemeni coffee beans would become a rarity as a result of Yemen’s decade-old war, Qamaria continued to source and roast the beans for more than a decade, with a distribution network that spanned across the country. The franchise said that its name, Qamaria, has cultural significance as an architectural element found in Yemeni homes, most commonly in the form of a rounded window filled with stained glass panels.

In 2020, it became clear to the partners that brick and mortar retail locations would enable the franchise to directly serve its customers and achieve an “optimal farm-to-cup experience.”

Metro Detroit is no stranger to the unique wonder and comfort of Yemeni coffee houses, with the popular Qahwa House now in three locations, as well as other favorites like Moka Coffee House, Haraz Coffee House and Finjan Cafe.

Qamaria planned a ribbon cutting ceremony for its new location at 25245 Ford Rd Suite B, Dearborn, for Friday.