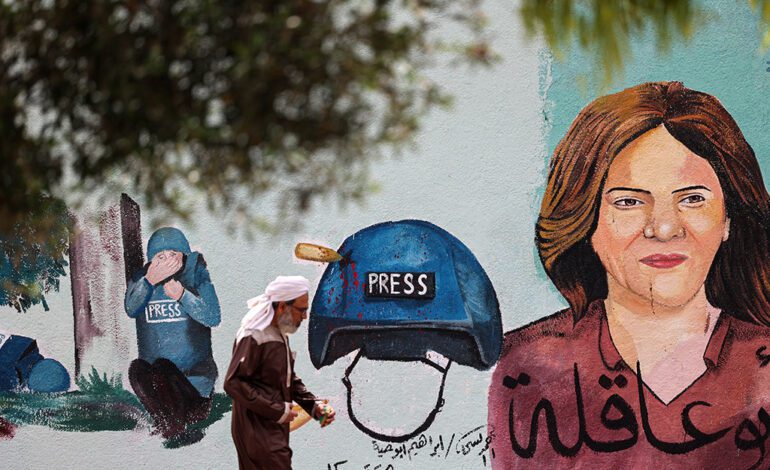 A Palestinian man walks past a mural painted by an artist in honor of slain veteran Al-Jazeera journalist Shireen Abu Akleh, in Gaza City on May 13. Photo: AFP

This week, the U.S. State Department officials said they “welcome” a report by Israel’s occupation forces that there was a “high possibility” renowned Palestinian American journalist Shireen Abu Akleh was “accidentally” killed by Israeli gunfire last May.

Though the Biden administration has made gestures towards accountability over the killing, the latest satisfactory acknowledgment of Israel’s own investigation goes on to show little possibility that will occur.

Al Jazeera reporter was wearing a bulletproof vest marked “Press” and a helmet when she was shot in the head in the Jenin refugee camp. Her killing led to global outrage and independent investigations that showed Israeli forces were behind the murder.

Israeli occupation forces have been known to directly target journalists as shown in international media organization reports. Abu Akleh was covering the raid of a Palestinian home in the refugee city of Jenin in the occupied West Bank when Israeli forces opened fire on her and her colleagues, killing her and injuring another.

Though Israel has now acknowledged one of its soldiers did in fact kill Abu Akleh, it has pushed back against suggestions of prosecuting the soldier who likely shot her.

The Palestinian government, after a forensic investigation, showed the bullet that killed Abu Akleh to be one used by Israeli soldiers and manufactured by the U.S. Palestinian reporter Shatha Hanaysha is seen next to the dead body of Al Jazeera journalist Shireen Abu Akleh in Jenin as they cover an Israeli occupation forces raid on the refugee camp. Photo: Screenshot/Reuters

No one will dictate our open-fire policies to us when we are fighting for our lives. Our soldiers have the full backing of the government of Israel and the people of Israel. — Israeli PM Yair Lapid

On Monday, the U.S. State Department said the U.S. has “made it a priority to mitigate and respond to civilian harm caused by military operations.”

“The Department of Defense recently underscored the need to improve its own assessments and practices to ensure civilian harm mitigation and we will continue to share best practices with our military partners and allies around the world,” it said in a press release.

“We’re going to continue to press our Israeli partners to closely review its policies and practices on rules of engagement and consider additional steps to mitigate the risk of civilian harm,” U.S. Department of State spokesman Vedant Patel told a news briefing on Tuesday.

But Israeli Prime Minister Yair Lapid has already rejected the State Department’s call for reform by saying no one “will dictate our open-fire policies to us” and Israel’s “soldiers have the full backing of the government of Israel and the people of Israel.”

“I will not allow an IDF soldier that was protecting himself from terrorist fire to be prosecuted just to receive applause from abroad,” he said, referring to the Israeli military.

The U.N. Human Rights Office also said it was “deeply disturbing” that Israeli authorities have refused to conduct a criminal investigation into the killing.

While the Israeli military knows the identity of Abu Akleh’s murderer, it has said that no one would be investigated or punished for her killing.

CAIR said that despite repeated calls from it, other civil rights groups, human rights activists and media associations on President Biden to order the FBI to investigate the murder, the State Department instead has tepidly called for the Israeli government to adopt new “policies and procedures to prevent similar incidents from occurring in the future.” Pallbearers attacked by Israeli occupation forces drop the coffin of Shireen Abu Akleh’s at her funeral on Friday, May 13. Photo: Maya Levin/AP

The crux of the “defense” in this IDF report is that a soldier was “returning fire” from militants. But investigations @NYTimes @AP @CNN @washingtonpost & @UN found no such firing at the time. This underscores need for independent U.S. inquiry into this American journalist’s death. — tweet by U.S. Senator Chris Van Hollen (D-MD)

“Unless the White House reverses course and orders an immediate independent FBI investigation into Abu Akleh’s murder, our government will bear responsibility for the next American journalist who dies at the hands of the Israeli military.”

U.S. Senator Chris Van Hollen (D-MD) dismissed the Israeli army report that claimed Abu Akleh was killed in the midst of a gun battle, saying it is unsupported by the evidence.

Following the release of report Van Hollen called for an independent U.S. investigation by tweeting, “The crux of the ‘defense’ in this IDF report is that a soldier was ‘returning fire’ from militants. But investigations @NYTimes @AP @CNN @washingtonpost & @UN found no such firing at the time. This underscores need for independent U.S. inquiry into this American journalist’s death.”

The State Department said its “thoughts remain with the Abu Akleh family as they grieve this tremendous loss – and with the many others worldwide who brought Shireen and her news reports into their homes for more than two decades.”

But Abu Akleh’s family says it’s not enough for the U.S. to ask Israel to reexamine its rules of engagement, and has repeatedly demanded meetings with Biden.

“You know, that statement did nothing other than obscure the truth and avoid responsibility and accountability, as a matter of fact,” she told Democracy Now’s Amy Goodman. “And time and time again, we’ve seen how Israel is unwilling to hold itself accountable for killings. And as a family and as her niece, we are infuriated. We were not expecting a statement from the Israeli government, the Israeli army, because we have seen how over the past months they’ve been changing the narrative and shifting the narrative.”

Queen Elizabeth II dies at 96, ending an era for Britain