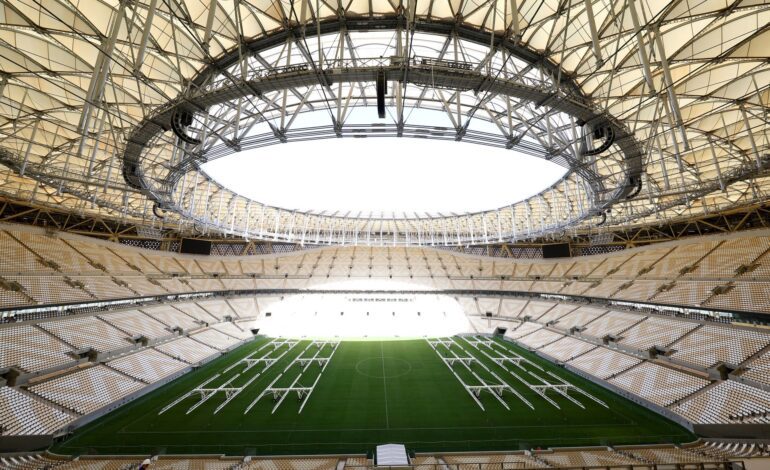 A view inside the Lusail Stadium, the venue for the 2022 Qatar World Cup Final. Photo: Pawel Kopczynski/Reuters

DOHA – Qatar has faced a lot of unfair criticism over its hosting of soccer’s World Cup that was not based on facts, but it has responded to any fair criticism, Qatar 2022 Chief Executive Nasser Al Khater said on Thursday.

He told a news conference, the first held by organizers in months, that 70 days prior to the tournament’s kick-off, sports and transport infrastructure in the tiny desert country were complete and remaining work was “aesthetic.”

The decision to have the World Cup in Qatar, the first Middle East country to host the event, has drawn criticism from human rights groups over the Gulf state’s treatment of foreign migrant workers and restrictive social laws, under which homosexuality and sex outside of marriage are outlawed.

“We think that a lot of the criticism has been unfair, not based on factual reality,” Khater said. “Whatever we felt was fair criticism we have taken on board.”

He spoke at Lusail Stadium, which will host the World Cup final. The 80,000-seat arena will handle a capacity crowd on Friday for the first time for the Lusail Super Cup, the last major test event for World Cup preparedness. The decision to have the World Cup in Qatar, the first Middle East country to host the event, has drawn criticism from human rights groups over the Gulf state’s treatment of foreign migrant workers and restrictive social laws, under which homosexuality and sex outside of marriage are outlawed.

World Cup organizers ignored questions about how Qatar’s security authorities would deal with fans who broke laws such as smuggling alcohol into stadiums or being violent.

They also did not provide details about which countries would send police officers or soldiers to Qatar to help secure the tournament that starts on Nov. 20.

In July, a source told Reuters that Qatar’s World Cup stadium stands are set to be alcohol-free, with beer sales outside arenas only allowed before and after some matches.

However, fans at November’s World Cup will also be able to buy beer during restricted times in certain parts of the main FIFA fan zone in the Al Bidda park in Doha, the Qatari capital.

“Unlike previous World Cup fan zones, beer won’t be served all day long, but at restricted times,” the source said.

Alcohol will also be available for 15,000 to 20,000 fans on a disused corner of the Doha Golf Club, some kilometers away from stadiums and the main fan zone, according to a document seen by Reuters. It also said a sandy plot surrounded by a 3 meter wall and located between the delivery entrance of a hotel and a district cooling plant could be transformed into a 10,000 capacity venue promising Techno music and alcohol.

More than a million fans are expected to attend the event, with many flying or driving in from neighboring Gulf states.

Doha spent years enhancing its infrastructure in the lead-up to the World Cup, including building seven new stadiums, a metro system and new expressways. Khater said the cost of Qatar’s World Cup was “in line with or less” than the last three.

— Wire and staff. Edited for style.

Queen Elizabeth II dies at 96, ending an era for Britain