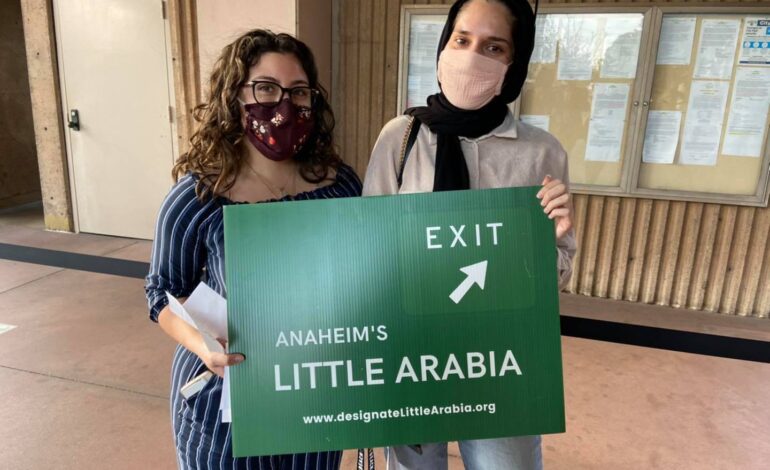 Community advocates in Anaheim, California advocate for the designation of a Little Arabia District at the Anaheim City Hall in March 2021. Photo via Facebook

ANAHEIM, CA — After years of lobbying by advocates, Anaheim finally designated its Arab American enclave as “Little Arabia” on Tuesday.

In a statement, Anaheim’s spokeswoman told CNN the city plans to follow up the designation with in-depth research.

“The Little Arabia designation recognizes an area of our city we’ve always celebrated as part of what makes Anaheim great,” said Erin Ryan, the city spokeswoman, in a statement shared with CNN. “We now turn our focus to an in-depth study that will help us lift up the Little Arabia community and all businesses along Anaheim’s Brookhurst Street.”

The designation covers an area on Brookhurst Street, from Ball Road to Broadway, that is home to multiple Arab American businesses. California has the largest Arab American population in the country: The state is home to close to 400,000 Arab Americans, according to research from the Arab American Institute Foundation. The largest portions of the population have Egyptian and Lebanese roots, according to U.S. Census data, but the state’s Iraqi, Syrian and Yemeni populations are also growing.

The Arab American Civil Council, a nonprofit based in Anaheim, has long advocated for the official recognition of “Little Arabia.” The idea started in 1990s with a group of Arab American entrepreneurs, the council said in a statement on Thursday.

“The decision to designate Little Arabia was a historic moment for us as a community,” Rashad Al-Dabbagh, the council’s executive director, said in the statement. “Over the years, Arab Americans have transformed Brookhurst Street into a thriving cultural and business destination.

“This is the beginning of a partnership with the city of Anaheim to work together on expanding and improving Little Arabia.”

Amin Nash, a research fellow at the council, also commented on the importance of the designation.

“This is a community that has felt ‘visibly invisible’ for a very long time,” Nash said in the statement. “Now, Anaheim is saying they see the community and are giving the community a place to showcase their humanity.”

— This article by Zoe Sottile first appeared in CNN. It has been edited for style.