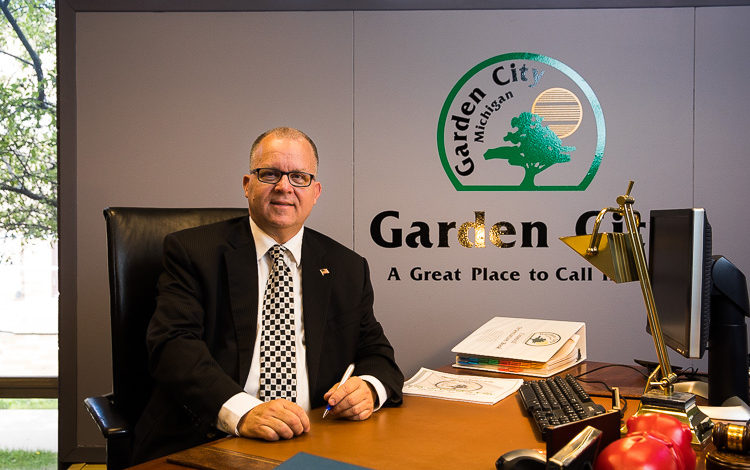 GARDEN CITY — Mayor Randy Walker is running for re-election in November. Walker has been the mayor since 2009.

Garden City has a “weak” mayor system, meaning it has a city manager who handles day-to-day duties. The mayor sits on the Council, but has no veto power and is recognized as head of the city government for all ceremonial purposes. He gets one vote just like the other Council members, but gets the last vote and can’t make a motion or second a motion.

Walker has a history of public service as he served in the U.S. Air Force for four years, is a volunteer reserve officer for the Garden City Police Department, is the Council liaison for the Garden City Planning Commission and is the director of Veteran Services for Wayne County.

Garden City has seen a number of changes during Walker’s tenure. The government staff and the Council took measures aimed at improving the city’s safety and livelihood. This included the purchase of police cars, rescue units, public work trucks and fire engines. Road construction, blight and employee and veteran support are other aspects of the city Walker has aimed to improve.

“We invested in code compliance to clean up blight in our city, voted to always support our employees, especially public safety,” Walker said in a candidate profile he submitted to The Arab American News. “I have always supported our veterans and military families. I have helped to make our city financially secure.”

Walker also said he voted to purchase the Radcliff Center in Garden City, which will be used for community recreation. The center will offer computer, craft and yoga classes, games such as dodgeball, nerf wars and soccer, preschool playtime and senior programs.

An essential part of being a mayor, he said, is building relationships with community members. He said with the help of the relationships he has cultivated, Garden City can move forward.

“I believe part of a mayor’s job is building relationships, relationships with residents, business owners, city employees, department heads, school board members and neighboring community leaders,” Walker said. “As your mayor, I have successfully developed relationships in these areas. It’s through these relationships that will help us continue to move Garden City in the right direction. Make no mistake, future decisions that lie ahead for our city will be very challenging. As a member of Council, my goal is to always vote for what is best for Garden City.”

Walker said he strives to move forth with continued consideration and concern for the residents of Garden City. He emphasizes the importance of the residents, employees, administrators and others collectively working together for the greater good of their city.

Walker advises individuals to exercise their right to vote and expressed his wish to continue to serve the residents of Garden City.

“I have had the honor of serving as your mayor and want to continue to serve in this capacity,” he said. “There is still more work to be done.”