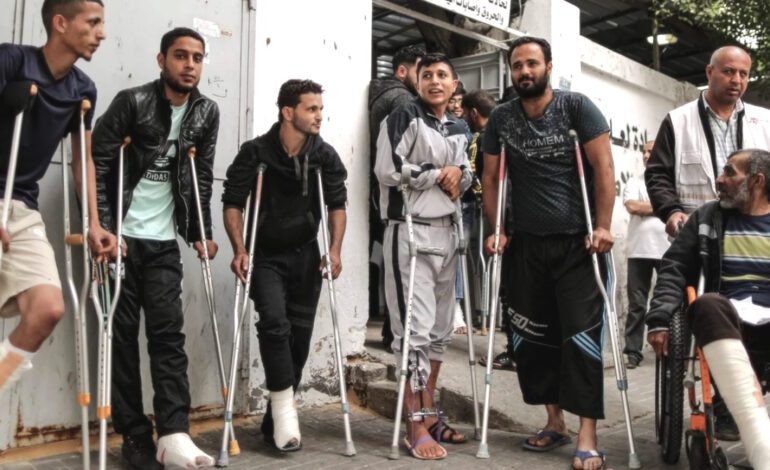 The Palestine Children’s Relief Fund (PCRF) and Fajr Scientific will host a charity fundraising dinner on Oct. 8 for resources to bring joint replacement surgeries to Palestinians living under a brutal occupation.

The situation for Palestinians, like those living under a crippling economic blockade in Gaza, has made the routine medical need for joint replacement surgeries brought on by conditions like arthritis even more drastic, given the overwhelmed medical system in the region.

Combined with this is the practice by Israeli occupation snipers to target the lower limbs of young Palestinians, like those who participated in the Great March of Return from 2018 to 2019, resulting in hundreds of amputations and creating further severe economic hurdles for the victims.

The fundraiser aims to raise money that will go towards purchasing implants and other surgical equipment, facilitating travel, training local surgeons and more, during two trips to the West Bank and Gaza made by volunteer surgeons next year.

The surgeons will volunteer their own time for the two missions.

The event’s organizers provided details on the importance of the mission to The Arab American News this week, encouraging the community to join the critical effort by donating and attending the dinner. The program will feature talks from the team of surgeons involved in the missions. Q) What are the specific needs of the Palestinian population as it relates to join replacement surgery? How does Israel’s economic and military blockade of Gaza and apartheid rule in the West Bank exacerbate this need?

For Palestinians, the debility of arthritis is compounded by circumstances created under apartheid in the West Bank and across a suffocating blockade in Gaza. In the West Bank, obstacles such as obtaining travel permits to reach hospitals across checkpoints, risking job loss for taking time off from work for primary breadwinners and accessing affordable care despite economic instability make accessing this life-changing procedure nearly impossible for many.

In Gaza, the Israeli military has “created a generation on crutches” by way of its “shoot to maim” policy targeting the lower limbs of thousands of young Palestinians who had participated in the Great March of Return. As a result, these patients require complex medical care, putting strain on the health infrastructure by way of time, funds, resources and energy.  About 8,000 Palestinians were wounded during the Great March of Return protests. The public assumes that the wounded eventually recover.  The reality is the majority of them are permanently disabled. These considerations together create a unique circumstance of need in Palestine for joint replacement surgery.

Q) Could you tell us about the PCRF and Fajr Scientific and how the collaboration came about?

Saleh: Fajr Scientific is the humanitarian arm of Saleh Medical Innovations Consulting (SMIC), a Michigan-based world-class innovator in orthopedic healthcare with a passion for the quality of lives of patients. SMIC has been transforming musculoskeletal care via supporting providers, hospitals and device organizations across the globe. Fajr Scientific delivers that same innovation and quality of care to less-privileged communities.

It has now partnered with PCRF to create a strong, synergistic collaboration that will elevate orthopedic care in Palestine.

Steve Sosebee (founder of the PCRF): The Palestine Children Relief Fund was founded in 1992 and has since provided critical medical care to hundreds of thousands of Palestinian children. In 2018 alone, nearly 13,500 children were treated by 83 different medical missions sent to Palestine from around the world.

PCRF also sponsored over 2,000 patients with especially severe cases to travel outside of Palestine and receive care, including surgeries and host families. It has built two pediatric cancer departments in Palestine and actively helps to improve the fragmented healthcare infrastructure. Palestinians shot in the legs by Israeli occupation forces while participating in the Great March of Return protests in Gaza. Photo:Mohammed al-Hajjar/Middle East Eye

About 8,000 Palestinians were wounded during the Great March of Return protests. The public assumes that the wounded eventually recover.  The reality is the majority of them are permanently disabled. These considerations together create a unique circumstance of need in Palestine for joint replacement surgery. – Dr. Khaled Saleh, Fajr Scientific founder

Q) What should the community know about the fundraiser’s goals? Is there a certain amount the organizations are trying to raise?

Saleh: A major goal of our partnership is to develop centers of excellence for orthopedics in the West Bank and Gaza so that Palestinians may have access to high-quality care despite their daily living challenges.

Two members of our team, orthopedic surgeons Dr. Greg Stocks and Dr. Tarik Nayef, have recently traveled to Palestine and identified six hospitals which may serve as centers of excellence.

Sosebee: The organizations will target to raise $200,000, of which about $40,000 has already been raised. All the funds will be used to purchase surgical equipment, orthopedic implants and travel logistics. Every surgeon is donating their own time.

Q) Why is it important for them to attend the event?

Saleh: Each surgery will not only greatly improve the quality of life of the patient, but also provide great relief to their surrounding family (potentially tens of people).

It may result in the patient being able to work again and provide for their family. It also relieves the financial needs of the Palestinian healthcare system. More importantly, it will train and make a number of Palestinian surgeons better further impacting thousands of others in the future.