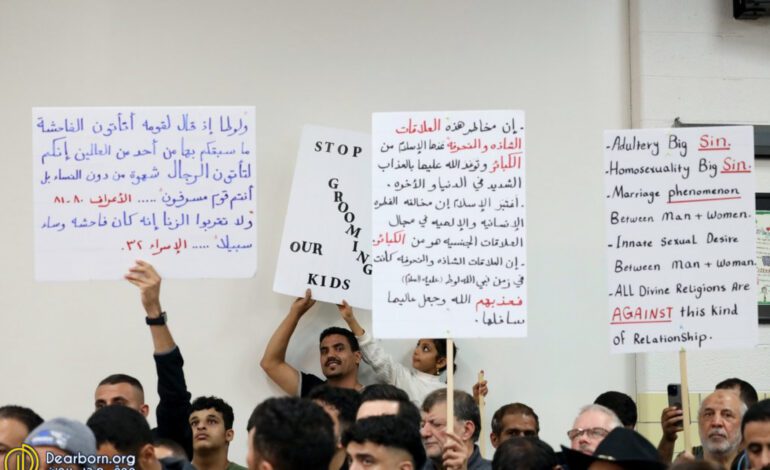 Protestors hold signs at the Dearborn Public Schools Board of Education meeting on Monday, Oct. 10 before it was shutdown by Dearborn Police and Fire, to be reconvened later in the week. Photo: Dearborn.org

By now, just about in everyone in Dearborn is aware of the book banning saga in the Dearborn Public Schools. A number of concerned citizens and parents have voiced their objections to the presence of certain books in school libraries, namely books that explore LGBTQ+ themes and lifestyles. Undoubtedly, parents should have a say in the education of their children and the materials they are exposed to.

On Monday and Thursday evenings the Dearborn School Board held open meetings where citizens were invited to express themselves on this topic. On Monday night, hundreds of people packed into the meeting. The building was overflowing with residents. After conducting some normal business, the Board was preparing to enter into the phase of the meeting that would feature public comments. At that time, the Board abruptly took a recess because of overflow concerns. Eventually, the meeting was canceled. This decision rightly angered and confused many of the attendees.

The Board should have been prepared for a large crowd and the decision to suddenly halt and postpone the proceeding came off as an attempt to avoid a difficult conversation. Surely, the Board should have handled this situation with much more tact and respect for those who took time to attend and politically engage.

Those who oppose the inclusion of the books in question claim they object to sexually explicit materials in the school libraries. If it were simply that, we’re sure we could find a consensus. However, on Monday night, one could not avoid seeing a large sign carrying the words: “Homosexuality Big Sin. Marriage between Man and Woman.” Other signs denounced “grooming”, “indoctrination” and “pedophilia.” This can only lead us to believe this is about much more than sexually explicit materials. It is also clearly about erasing narratives about alternative lifestyles, specifically voices from the LGBTQ+ community.

On Monday night, before postponing the proceedings to Thursday night, the Board heard a presentation from district employees outlining a process to object to books. They also noted that parental consent is required for certain books with more mature themes. Further, the books in question have been pulled from the shelves for review. Finally, parents can opt their children out of reading certain books if they wish to do so.

On Monday night, one could not avoid seeing a large sign carrying the words: “Homosexuality Big Sin. Marriage between Man and Woman.” Other signs denounced “grooming”, “indoctrination” and “pedophilia.” This can only lead us to believe this is about much more than sexually explicit materials. It is also clearly about erasing narratives about alternative lifestyles, specifically voices from the LGBTQ community.

On Thursday night, however, the objections continued. Those against the books want them removed altogether. This whole saga has erupted into one side asking for government censorship in the public schools. While we can understand a position that objects to sexually explicit material, we cannot accept a stance that seeks to censor material that explores subject matter that a certain segment of society finds morally objectionable. This puts us down a slippery path of censorship.

America has been built on avoiding a tyranny of the majority and protecting the rights of minorities. While America has often struggled to live up to that standard, that ideal should remain something we always uphold.

The position embraced by the “anti-book” crowd leads us into dangerous dimensions. Imagine that a Muslim writes a book about her experiences as a veiled woman. She explores the terrible bigotry she has faced, often with harsh language and disturbing scenes. A community made up of mostly conservative Christians demands the removal of this book from their public school library. They say, “We don’t want our kids learning about Islam, a religion that goes against everything we believe.” Surely, we would collectively denounce their efforts. And we would be right in doing so.

Ultimately, this whole episode is about inclusion and freedom of expression. What kind of city and society do we want to live in? We believe in one that celebrates diversity. After the meeting was canceled on Monday night, many of those in favor of banning the books decried how their freedom of expression was being denied. Yet now, they wish to inflict that same prohibition of those who believe in different lifestyles than they do.

Again, this is not simply about banning sexually explicit materials. One can make a strong case why such materials would be inappropriate in school libraries, even those in high schools. The district has articulated a review process for such materials. So why do the protests continue? Because, sadly, this is about much more than that.

Both DePerno and Karamo are right-wing members of the Republican Party. Both are election deniers. Both are strong supporters of former President Trump, who famously campaigned on and later implemented the Muslim Ban.

On Thursday night, at Stout Middle School, where Monday’s meeting was continued, many continued to protest the inclusion of LGBT+ materials in the schools. While those against the books have proclaimed this is not about partisan politics, they were joined by Republican candidates for statewide office. Matthew DePerno, the GOP nominee for attorney general, and Kristina Karamo, the GOP nominee for secretary of state, both united with the anti-book protesters, speaking in support of removing the books in question. DePerno and Karamo received loud applause after their remarks.

Both DePerno and Karamo are right-wing members of the Republican Party. Both are election deniers. Both are strong supporters of former President Trump, who famously campaigned on and later implemented the Muslim Ban. Karamo has spread conspiracy theories about the January 6 insurrection, stating, “I believe this is completely Antifa posing as Trump supporters.” Hundreds of federal indictments have proved her wrong. DePerno is currently the subject of a criminal investigation for participating in a scheme  to seize and tamper with voting machines in the 2020 election. But perhaps more importantly than all of this, they are both part of a right-wing faction of the GOP that has consistently demonized Arab and Muslim Americans. Is this who anyone in our community wants to align themselves with?

Dearborn Mayor Abdullah Hammoud and U.S. Rep. Rashida Tlaib have both warned that certain forces would attempt to divide our community and turn some Arab Americans into political pawns. On Thursday night in Dearborn, we saw that play out. Republican candidates who are part of a machine that sought to ban Muslims from entering the United States suddenly stood with Muslim Americans at a Dearborn School Board meeting, all to push an anti-diversity agenda.  We wonder if DePerno and Karamo had ever visited Dearborn before tonight.

At a certain point in Thursday’s meeting, a man approached the microphone. He started to speak. “My name is Jackson Wagner. I was born in Dearborn. I’ve lived here my entire life. And I am a gay man.” After that last sentence, many in the crowd booed. Is that an action these parents want to teach their children?

Mr. Wagner continued: “Diversity has always been Dearborn’s strength. Let’s never forget that. We have schools to train students to be engaged citizens of a democracy and to coexist with people different than them. How can we teach the next generation of citizens to embrace democratic values like freedom of the press, freedom of speech and freedom of religion if we betray these principles and deny them these liberties in schools? Dearborn should be a city where everyone knows they are safe, and loved and supported.”

We could not agree more.