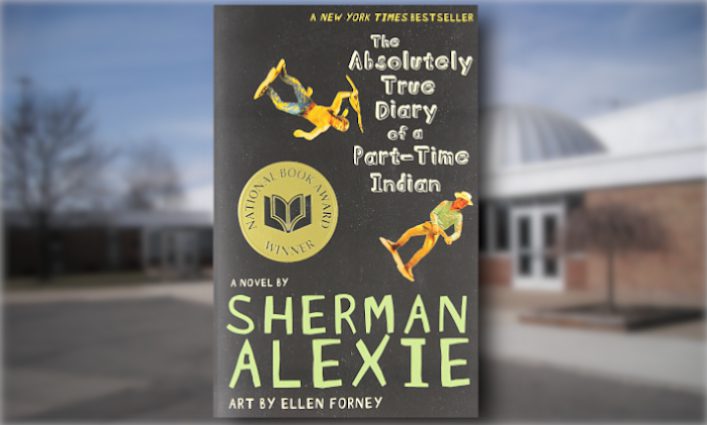 DEARBORN HEIGHTS — A book was recently taken out of instruction in a Dearborn Heights school, following an ongoing controversy around books in schools in neighboring Dearborn.

Crestwood School District officials were made aware of a social media post with photos of a book being taught to ninth grade students that included sexually explicit language.

Earlier this year in Dearborn, a parent complained of books, a majority of which center on LGBTQ+ issues, which she found on a national list of books deemed by some as offensive. That controversy has come to a head in recent weeks and culminated in protests at school board meetings and elsewhere, demanding any such material be removed from schools.

In Crestwood last week officials chose to remove the book in question — The Absolutely True Diary of a Part-Time Indian by Sherman Alexie —  from being taught to the class following the social media post.

The book concerns a a Native American teenager, his life on the Spokane Indian Reservation and his decision to go to a nearly all-White public high school away from the reservation. It includes more than 60 comic illustrations.

The book deals with the protagonist’s struggles with the realities of reservations across the country while coming of age in a community ravaged by poverty, alcoholism and serious mental health issues from historical discrimination and neglect, and persevering though barriers at an all-White school.

Its explicit depictions of sexuality, profanity and racial slurs has made it the subject of book challenges in several U.S. schools over the years, being the most-challenged book in the country from 2010 to 2019. We are trying to do everything we can to safeguard free thought and open education, but at the same time making sure we’re protecting students from language that their parents wouldn’t allow them to use in their homes. — Crestwood School District Superintendent Youssef Mosallam

Crestwood Public School Superintendent Youssef Mosallam told The Arab American News that the book is approved by the Michigan Public Library Database and the Common Core of Language Arts for Reading and as such covers elements in the Common Core academic standards.

“This book is used across the state of Michigan, so it’s not exclusive to Crestwood,” Mosallam said. “We became aware that there was crude and sexually explicit wording, and we can’t accept that for our young students. Part of the reason why we can’t accept that is that if students were using that language in the hallway they could get in trouble for it.”

Mosallam said the district focus is on evaluating such explicit content, with cooperation from teachers and media specialists, and determining if there are other options to cover those Common Core standards.

Last year was the first year the Crestwood School District attained media specialists, who are educators with library specialties.

“Usually when you choose books, they come with recommendations from the state, the media specialists review them to see if they fit the Common Core; those are things we are currently in the process of,” Mosallam said. “We’ve been in that process since August.”

The district is also evaluating how educational content from books can be taught to students without the inclusion of explicit language or other content that may not be appropriate for certain students. This includes books housed in libraries as well as those taught directly in class.

The district is also in the process of creating and refining a book challenge process for its policy.

“We’re asking the community to work with us,” Mosallam said. “This isn’t something that we need to be at odds with each other on. We need to work together. There are thousands of books and if a parent doesn’t feel comfortable with a book, let us know. We will definitely look into it and identify what needs to be done.”

Mosallam said the district’s focus is on crude, sexually explicit material. Books may also have historical significance, as in the case of classic literature, and the district determines whether students are being taught that historical context through them.

“We are trying to do everything we can to safeguard free thought and open education, but at the same time making sure we’re protecting students from language that their parents wouldn’t allow them to use in their homes; that we wouldn’t allow them to use in the school,” Mosallam said. “There’s also historical significance, as in the case of classics. Things aren’t black and white; it’s about striking a balance. And if we work together, we find that balance.”