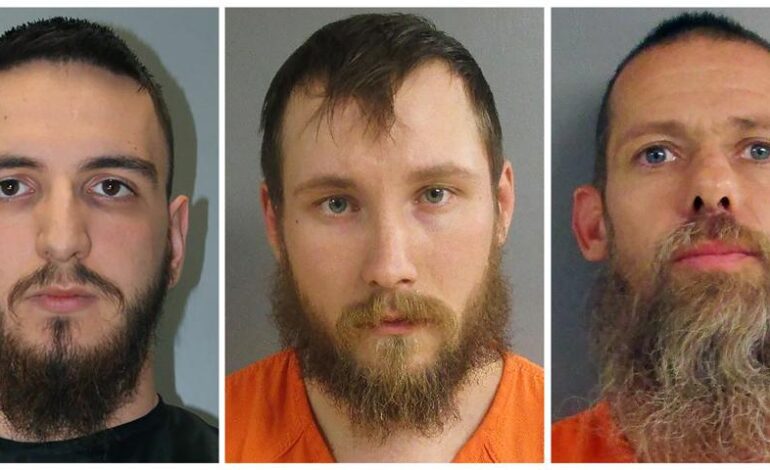 JACKSON COUNTY — Three men who were arrested on charges of plotting to kidnap the governor of Michigan and planning an attack on the state Capitol building were found guilty this week.

The three men were part of a bigger criminal conspiracy that was tracked and uncovered by a joint operation of state and federal authorities in early October  2020. Law enforcement and their informants exposed a plot that included targeting law enforcement officers, threatening violence to incite a civil war, planning an attack on the state Capitol building and kidnapping government officials, including Governor Whitmer, over COVID-19 restrictions.

Back in 2020, several of those arrested, including the three men, were alleged to have called on the groups’ members to identify the home addresses of law enforcement officers in order to target them; made threats of violence to instigate a civil war leading to societal collapse and engaged in the planning and training for an operation to attack the state Capitol building and kidnap government officials.

Police executed a series of search and arrest warrants in more than a dozen cities around the state, including, Belleville, Cadillac, Canton, Charlotte, Clarkston, Grand Rapids, Luther, Munith, Orion Township, Ovid, Portage, Shelby Township and Waterford in connection with the plot.

Morrison, Bellar and Musico are now expected be sentenced in December on those charges.

“Terrorist attacks and mass shootings are not spontaneous events; they are the result of planning, plotting and amassing resources in a build-up to violent acts,” Nessel said. “If prosecutors had known about the events leading up to the tragedy in Oxford, they could have intervened and prevented the massacre of innocent students.

“Instead of only reacting to known threats, it is imperative that law enforcement be proactive in order to save lives,” she said. “This office will not sit idly by and watch while armed terrorists plan acts of civil unrest with the intent of causing mayhem and murder. These are not merely acts of ‘harmless chatter’ and ‘wishful thinking.’

“Make no mistake, the quick actions of law enforcement saved lives. We are pleased the jury clearly understood that.”

“Citizens across the state can take comfort in the fact that law enforcement agencies across Michigan are working together every day to protect our communities from ideological extremists seeking to do harm,” said James Tarasca, special agent in charge of the Federal Bureau of Investigation in Michigan.

Whitmer thanked the AG and law enforcement efforts and said no threat, plot or rhetoric will break her belief in the goodness and decency of the state’s people.

“Today’s guilty verdicts are further proof that violence and threats have no place in our politics,” Whitmer said Wednesday. “Those who seek to sow discord by pursuing violent plots will be held accountable under the law. This trial is another stark reminder that we must take an honest look at the state of our politics.

“Politically motivated plots, threats and violence are increasingly common against public officials as well as everyday citizens. They are the logical, disturbing extension of radicalization, hatred and conspiratorial thinking that festers in America, threatening the foundation of our republic.”