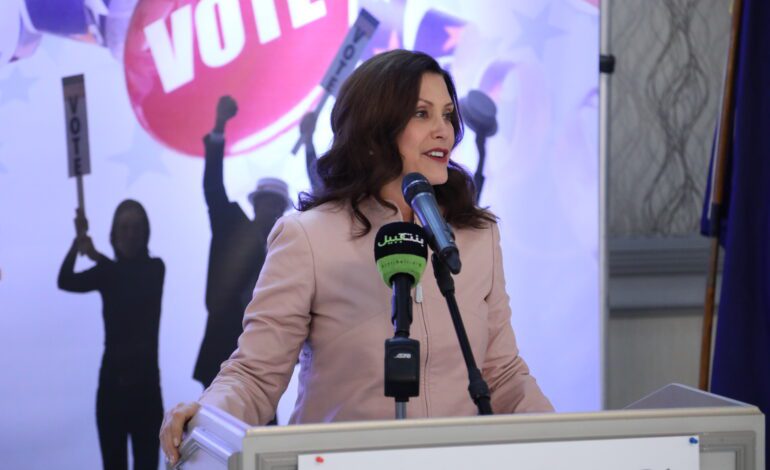 Those in attendance and on the speakers’ list were Democratic leaders and November election hopefuls Governor Whitmer, Attorney General Dana Nessel and Secretary of State Jocelyn Benson.

The non-partisan AAPAC advocates for Arab American participation in the political process and encourages Arab Americans to vote and run for public office. Members interview candidates to discuss their platforms towards endorsement and the organization lobbies on behalf of the Arab American causes.

AAPAC members and endorsees have been local civic and political mainstays and the group has been an integral part of local Arab American political activity.

A 12-page bilingual newsletter of AAPAC candidate endorsements for the November election will be mailed to Arab American voters in Dearborn and Dearborn Heights soon.

At the banquet, organizers showed a brief video about AAPAC’s origins and mission.

Since taking office, Whitmer has appointed an unprecedented 99 Arab Americans to the bench, agencies and commissions.

Dearborn City Councilman and AAPAC member Mustapha Hammoud was given a public service award for his successful efforts to bring language access to the city’s voters, as well as a recently passed resolution prohibiting discrimination in the city based on religion, race, national origin, gender, ability, sexual orientation, gender identity and more.

“One of my personal goals has been to encourage our community members to be involved in public series, and this was not an easy task in the beginning,” Hammoud said. “We are a community of entrepreneurs, but today its not easy to count how many of us ended up in important elected or appointed positions in the state.”

Osama Siblani, publisher of The Arab American News and one of the original members of AAPAC, introduced Whitmer to the podium.

“We have to remember our friends,” Siblani said. “Governor Whitmer was here in 2015 when she was not a governor and she is here today. She did not come here yesterday to tell us something that others are trying to tell us… to steal our votes in a very dirty and nasty way.”

Whitmer said she was proud to be an ally and a supporter of the community. Since taking office, she has appointed an unprecedented 99 Arab Americans to the bench, agencies and commissions.

“We know that there are politicians who seek to win elections through fear, through division… they don’t care about solving problems, they just care about winning,” Whitmer said. “That has never been the north star for the work that I’ve done.”

Nessel was introduced as “the people’s lawyer.” She said she wouldn’t have been elected if it weren’t for the community.

“Since that time, I have been trying to do everything I can to support this community back, (for example) through the great work that Fadwa is doing as solicitor general,” Nessel said. “I am so proud of the work that Mike Ajami (expungement unit director) has done in delivering a second chance to people all across the state.”

Nessel said Ajami’s expungement work leads him to interact with people in places where they have seldom met an Arab American before, but its an Arab American who is delivering to them a second lease on life.