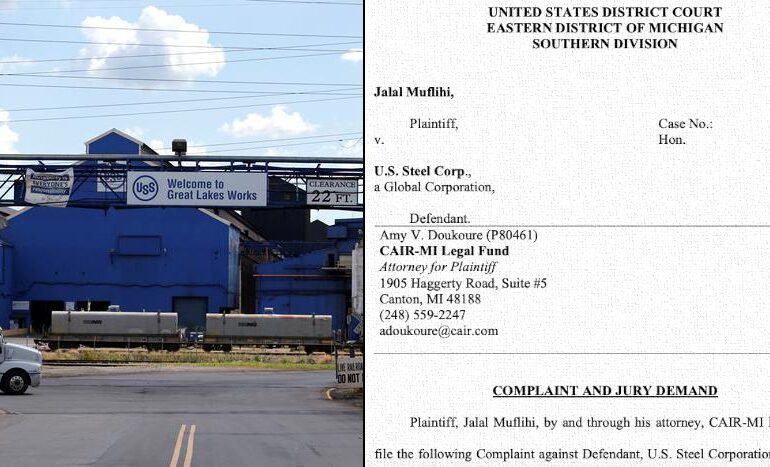 The lawsuit, filed by the Michigan chapter of the Council on American Islamic Relations (CAIR-MI) in federal court on behalf of Yemeni American Jalal Muflihi, says Muflihi complained for nearly a year that his supervisor at U.S. Steel’s Great Lakes Works (GLW) plant in Ecorse had been singling him out for discipline and unfair treatment based on his national origin and religion.

Muflihi said he believes that as a result of his complaints related to his discriminatory treatment, he was subjected to unfair disciplinary action and was recently terminated.

He began working at the U.S. Steel plant in 2013. It is believed that he was one of only two Arab Muslims to ever be employed at the location in the eight plus years he worked there.

Muflihi says his supervisor refused to allow him to work on new equipment and gain certification compared to other non-Arab Muslim employees with less seniority. It allegedly took significantly longer to obtain the same amount of certifications in comparison to his similarly situated non-Muslim, non-Arab coworkers.

He also says he was targeted for harassment by being followed around the plant by his supervisor, who refused to allow him to take breaks in the break room, and recruited his colleagues to further target, harass and spy on him.

Muflihi also alleges that the supervisor violated his union contract by making sure he received less overtime than other non-Muslim, non-Arab coworkers.

Muflihi was ultimately terminated after anonymous complaints that he used a racist term against African Americans, accusations that the lawsuit says are “false and baseless.”

As a result of his experience, the lawsuit says, Muflihi has suffered from severe medical episodes related to anxiety, PTSD, high blood pressure and more. He is suing for compensation for economic and emotional damages and legal fees, and a reinstatement to his former position or a comparable position. Prior to filing the suit, Muflihi and CAIR-MI unsuccessfully reached out to U.S. Steel to attempt to resolve this matter.

“Mr. Muflihi should be able to provide an honest living for his family without having to suffer discrimination and harassment on the job,” said CAIR-MI Staff Attorney Amy Doukoure in a press release, “At no time should anyone fear that speaking up about discrimination can result in retaliation and termination from their place of employment.