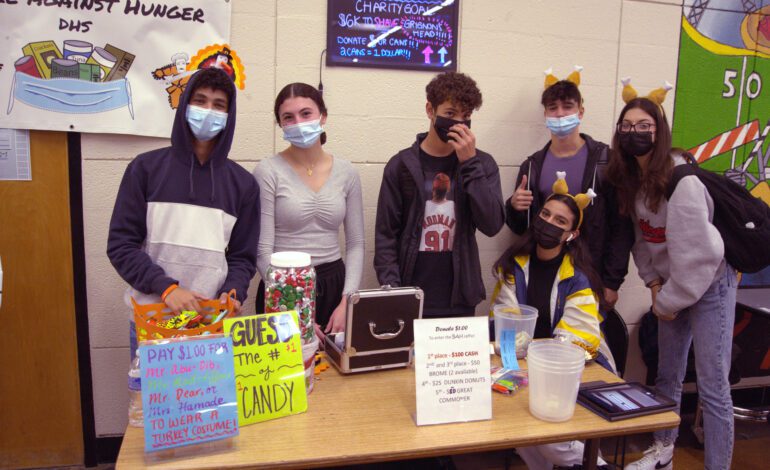 The event bring together students and families. Last year, the school community collected more than 19 tons of food to donate and more than $3,700, the district said in press release.

This year’s battle kicks off with “Eat Around Dearborn” — a community wide dine-to-donate — where patrons can visit one of  several eateries from Friday to Sunday, Nov. 11 to 13.

Eight eateries will donate a portion of the proceeds back if a customer notes they are there for the Battle Against Hunger during the participating time periods over the weekend.

Anyone who dines at one of the eateries from Friday, Nov. 11 through Sunday, Nov. 13 should say they are donating to Fordson, Dearborn High or Edsel Ford to have a portion of their purchase donated back to Battle Against Hunger.

“We are excited to do Eat Around Dearborn again! We are excited for people in the community to go to locations and support local businesses and donate to our cause!” said Angela Altomonte, a Fordson teacher who has helped organize Battle Against Hunger for several years.

Food donations gathered at the schools through Battle Against Hunger are given to Zaman International to distribute to the community. Monetary donations will go to the Amity Foundation, with a portion raised at DHS going to the LEAD Foundation.

Battle Against Hunger started in 2015 as a friendly off-field competition between rivals Dearborn and Fordson High Schools. Edsel Ford High School joined the food drive later, and then it was opened for all the district’s other schools interested in participating.

Initially, the event was a competition between the schools to see who could collect the most non-perishable food.  Now, the event is a cooperative effort to help families in need.

Food donations will be collected at all three traditional high schools and Henry Ford Early College.

Those interested in making a monetary donation can donate online at secure.qgiv.com/for/battleagainsthunger/

“We are so glad that our high school students step up every year to help lead the Battle Against Hunger and that it has expanded to other schools in the district,” said Superintendent Glenn Maleyko. “Having our school community come together in such a big way to show our students what empathy for others means is an invaluable experience.”

Man arrested in connection with stabbing attack on Dearborn west side